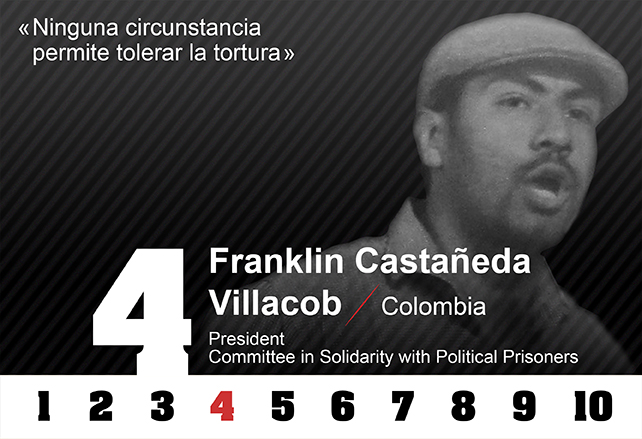 My name is Franklin Castañeda Villacob and I am 30 years old. I have devoted 12 of those years to the defence of human rights, working with the Committee of Solidarity with Political Prisoners (CSPP), a human rights organization which acts (i) to provide legal assistance to persons who are detained for political reasons, (ii) to monitor the implementation and guarantee of the rights of persons deprived of their liberty, (iii) to lend support to social, rural and trade union communities and organizations and women’s, student and human rights defenders’ associations and (iv) to provide legal assistance to victims of grave violations of human rights, principally torture, extrajudicial executions and forced disappearances.

I originally joined the Committee as a volunteer in its office in the town of Barranquilla. I was displaced from there on 1 June 2006 because of grave threats: following an attempt on my life and an attempt at causing my disappearance, I was obliged to transfer to the city of Bogota. There, I have continued my work as a human rights defender with CSPP and almost two years ago was elected President of its national executive board.

In addition, I am the national spokesman for the Movement of Victims of State Crimes (MOVICE), a Colombian social movement comprising thousands of persons affected by victimization strategies carried out directly by agents of the State or by means of paramilitary groups.

CSPP, for its part, is one of the founder organizations of the Colombian Coalition against Torture (CCCT).

What today is the biggest challenge in the fight against torture in your country? Could you take stock of the situation with regard to torture and ill-treatment in your country (the context, the scope of the problem, the types of victim and perpetrator, etc.)?

The first challenge in Colombia is to make it clear that torture exists and that, despite its apparent under-registration by human rights organizations and the fact that the State does not accept that it exists and consequently does not address the problem, torture is generalized and practised systematically by all the armed actors in the Colombian conflict, without the State adopting measures to prevent and punish this scourge.

Similarly, it is necessary to denounce the practice of torture and other cruel, inhuman and degrading treatment in prison establishments.

According to the latest report published by CCCT, between July 2001 and June 2009, no fewer than 1,834 persons were the victims of torture, of whom 422 remained alive, 1,148 were assassinated and 264 were the victims of psychological torture. Of the total number of cases registered in which the sex of the victim is known (1,561), 200 concerned women, that is to say there were approximately 15 female victims of torture for every 100 male victims. Of cases where the age of the victim is known (610), 172 concerned children, 179 concerned young persons and 10 concerned adults. In cases where the presumed perpetrators of torture are known (1,350), State responsibility was in question in 90.59 per cent of those cases: in 41.93 per cent of them (566) by reason of the direct involvement of State agents and in 48.667 per cent (657) through omission or through tolerance of, acquiescence with or support for violations committed by paramilitary groups. Responsibility was attributed to the guerrillas in 127 cases (9.41 per cent).

Violations related to torture, such as extrajudicial executions and forced disappearances directly attributed to the military or police forces, forced displacements, sexual violence and the recruitment of children and adolescents, are also being committed in Colombia. 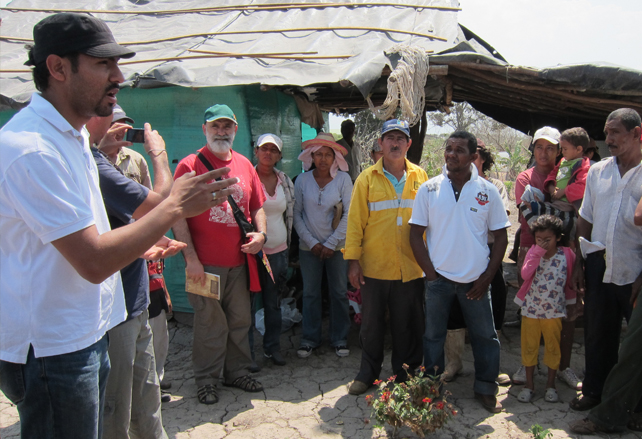 According to your experience, what the root causes of torture and impunity?

We can mention various causes of torture and its persistence in Colombia. On the one hand, there is the broad participation of agents of the State in the commission of acts of torture and their use of torture as an efficient means of obtaining information, punishing persons, individually or collectively, and obliging them to act in conformity with the wishes of their captors.

On the other hand, the justice system in Colombia typically moves slowly and is biased towards the organs of power. It has also been demonstrated recently that the justice system is subject to pressure from the armed forces; how else to explain why the judge who sentenced armed forces general Plazas Vega was almost immediately afterwards forced to leave the country as an exile, or to explain the telephone tapping of the high courts of justice by the intelligence organs in Colombia?

What is your approach and what kind of activities do you carry out to fight torture and ill-treatment in your country? Can you give examples of achievements linked to these activities?

Since I began working at CSPP and CCCT I have undertaken various types of work, which I can sum up as follows:

(i) Training for individuals deprived of liberty, communities and social organisations, on issues such as human rights, mechanisms of protection and auto-protection, rights of the victims, etc.

(ii) Presentation of denunciations and follow-up of cases before judicial authorities at the national and international levels, as well as to the public, with respect to acts such as torture, extrajudicial executions, forced disappearances and other grave violations of human rights.

(iii) Research, preparation and publicizing of reports, as well as interaction and intervention with national authorities and the international community to bring about changes in Colombian policy in favour of respect for human rights and the activation of justice.

(iv) We are moving forward with our work of monitoring the situation with regard to prisons and the human rights of prisoners, and of providing legal advice to individuals deprived of their liberty.

What obstacles do you encounter daily when you are carrying out your activities?

Obstacles encountered in the investigation of acts of torture committed previously are the non-application of protocols such as the Istanbul Protocol on forensic matters, and the persistent invisibility, and consequent non-investigation, of torture, or its concealment as less serious misconduct, such as causing personal injury. A general obstacle is the refusal of the Colombian State to take measures to recognize that torture is a systemic phenomenon or to initiate prevention programmes, while restricting the role of the monitoring bodies and denying the need to ratify the Optional Protocol to the Convention against Torture (OPCAT).

Similarly, obstacles to the work of human rights defenders persist. For example, since May this year, 39 years after the founding of CSPP, the Government of Colombia, through the National Prison and Penitentiary Institute (INPEC), has prohibited our entering prisons. This is impeding our work of verification, prevention and the search for justice in cases of torture committed in prisons and other detention centres.

Do you feel threatened because of your activities? Do you face any interference in your work? If this is the case, please provide details.

The situation of human rights defenders in Colombia is critical. During the past year, CSPP has suffered threats, harassment, theft of information and discrimination on the part of the Colombian State, which has also denied it entry to the country’s prisons.

Concretely, we have received seven collective threats of death addressed to the members of the organization and nine individual threats (two of them against myself). There have been 18 instances of personnel being followed, four episodes of theft of information from or sabotage of our web page and private communications, and more than 90 requests for entry to prisons have been refused.

During the life of our organization, six of our members have been assassinated. The last of them, Luciano Romero, was assassinated in 2005 as the consequence of torture by paramilitaries and functionaries of the Colombian State, who over the course of several hours cut his body some 50 times. One of our lawyers remains missing after having disappeared over 20 years ago. Some dozen persons belonging to our institution have had to go into exile and our offices in some regions have had to close their doors for lack of guarantees. 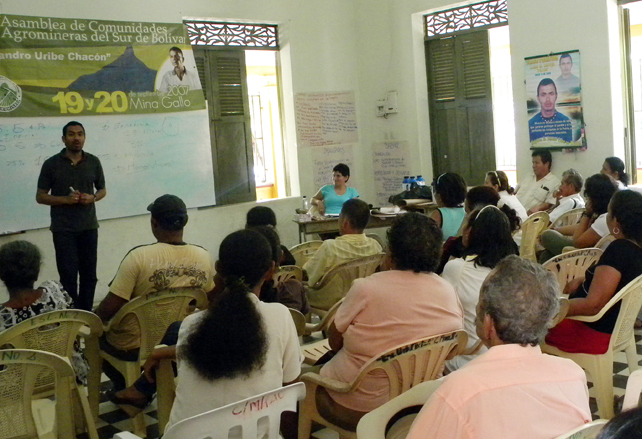 What needs to be done so that “Nothing justifies torture” becomes a reality in your country?

What is needed is for a strategy to be drawn up that provides for both the documentation and the denunciation of acts of torture; for effective action to be taken to influence the Government; and for pressure to be brought to bear on it to ratify the Optional Protocol to the Convention against Torture (OPCAT).

We have also proposed involving sectors of the international community that could support human rights defenders in a campaign to influence the Colombian State and demand that it take measures to prevent and punish torture.

Finally, the Colombian justice system needs to be capable of proceeding in an independent manner to clear up cases, find the culprits and impose appropriate sentences. A justice system that does not act prolongs the occurrence of grave violations of human rights.

What part does and should public opinion play in the fight against torture and what can the public do to support that fight?

In any State, public opinion plays a fundamental role, since on its capacity to exercise pressure and democratic engagement will depend the effective enjoyment by the population of their rights. In the case of torture and its occurrence in Colombia, the public can, through its action, oblige the State to eliminate the practice of torture. It is therefore vital that progress be made in raising public awareness and in demonstrating to the population that this scourge exists.

Colombian public opinion still recalls the scandal caused by the army when it assassinated more than 3,500 persons, after torturing many of them, and made it appear that they had died in combat – a phenomenon that was amply denounced by human rights non-governmental organizations, but which only received the attention it deserved when public opinion and civil society was sufficiently well informed to repudiate such acts and to force a drastic decrease in their incidence.