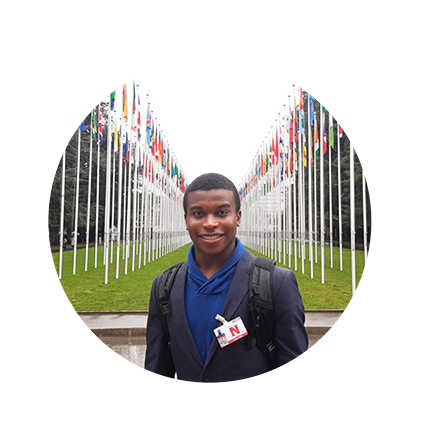 The morning of 18 March, I gathered the bags that I had packed the night before to board a flight back to the United States. My time in Switzerland had come to an abrupt end. I had expected to continue living in Geneva for the next three months, but the Covid-19 outbreak that was spreading from Italy to all countries in Europe had decided otherwise. So here I was, seated inside a partially empty plane, awaiting the unknown conditions that I would face upon my arrival. Now I am at home in the U.S, a member of the global community that has been affected by the pandemic.

In early 2020, I had been offered the opportunity to participate in a study abroad program, where I would continue my undergraduate education in Geneva, Switzerland. To complement my studies, I would also work as an intern for the OMCT. As someone that had never travelled to Europe before, I was ecstatic. I had only been exposed to one general set of norms, and I was eager to accept change and gain knowledge from this new experience. The opportunity to study in another country, along with gaining worldly professional experience, was a dream come true.

Upon my arrival, I rapidly immersed myself in my new surroundings. I explored the beautiful city of Geneva, visiting prominent tourist attractions, such as the Jet d’Eau or the local cafes in nearby Old Town with much excitement. On my first day of work at the OMCT, I was a bit nervous, but was met by a welcoming, professional community. Colleagues came from various countries and were versed in a multiplicity of languages. In the beginning, their constant use of jargon was rather baffling: why did they keep talking about a “cat”, for example? I could see no feline around.

My work in communications has been quite immersive. I have assisted with media content creation and editing for global human rights initiatives, including human rights abuses in Mexico and India. Not long after I started, I helped organize a press conference at the Swiss Press Club on the sexual abuse of deaf children by members of the Catholic Church in Argentina. The occasion was the visit to the UN of three survivors of this shocking case, supported by Argentine members of OMCT’s SOS-Torture Network. Hearing the testimonies of these people - a woman and two men who had suffered unbelievable cruelty since they were small children - was a truly transformative experience. It made the fight for the upholding of human rights more of a reality, breathed life into my work and inspired me to try to enact change in any way possible.

Another highlight was that day in March when I went to the United Nations with our digital manager, Hannah, to livestream a side event on police violence in Latin America during the spring meeting of the Human Rights Council. I had seen the gates of the “Palais” before but entering in an official capacity made me feel like a kid in a candy store. Walking through the halls, I took in the expansive views and distinct architecture of the colossal building. In this very setting, the leaders of the world convened to ensure international stability, and I had somehow become a part of it !

That 18 March flight has taken me from the center of international diplomacy to the epicenter of the global Covid-19 crisis. The United States accounts for well over 25% of the world’s total infections, and this number continues to climb. Like most people, I now spend most of my days inside my family home in Connecticut. I can no longer venture through Geneva, take a train to Lausanne, or be surrounded by my OMCT colleagues.

The good news is that I continue to work and study from home. Of course, What’s app calls and video chats can’t compare to in-person interaction. I miss the physical presence in the office. Still, I provide an effective contribution to the OMCT from 3,800 miles away and I continue to gain valuable experience. From making submissions for website upgrades and conducting research for the upcoming annual report, I have been able to remain productive as an intern.

Don’t you believe that I’m not disappointed when thinking of all the experiences that I have missed out on : attending the country reviews by the Committee Against Torture (yes, this was the “CAT” everyone was talking about!) or watching movies and meeting celebrities at the International Film Festival and Forum on Human Rights. The first one was postponed, while the second moved online. There will hopefully be other opportunities.

I truly appreciate and cherish the time that I did spend in Geneva. I’ve gained experience, learned from professionals, visited important institutions, and found that « cats” come in different shapes and forms. As I near the final stages of my undergraduate education, I have been inspired to discover and pursue the plethora of opportunities that the world has to offer. Even though my physical presence at the OMCT may have been short, it holds a quality that continues to have a positive impact on my life.