As an appeal hearing for land and housing rights activist YORM BOPHA will be held at Cambodia’s Supreme Court on 22 November 2013, the World Organisation Against Torture (OMCT) reiterates its call to the Cambodian authorities for Ms. Yorm Bopha's immediate and unconditional release. 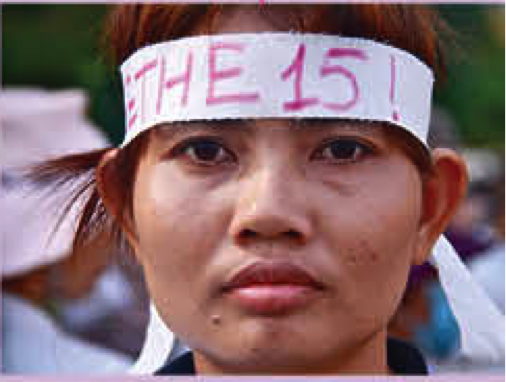 Shehas been actively involved in her community’s struggle against forced evictionsand emerged at the forefront of a campaign for the release of thirteen of herfellow activists (the “Boeung Kak 13”) who were arrested, charged, convictedand imprisoned as a result of a peaceful land rights demonstration in May 2012.

Ms.Yorm Bopha was arrested on 4 September 2012 and is currently servinga two-year prison sentence after being found guilty on bogus charges of assaultwidely perceived as related to her activism. Her conviction was upheld onappeal on 14 June 2013 when the original custodial sentence of three years wasreduced to two on the grounds that she did not directly commit violence. It isalleged by the court that she and her husband masterminded the assault of twosuspected thieves. Her husband’s full three-year prison sentence was suspendedby the Phnom Penh Municipal Court, while Ms. Yorm Bopha was immediatelydetained.

Ms.Yorm Bopha then appealed to the Supreme Court. In themeantime, she remains detained in correctional center Police JudiciairePrison, Phnom Penh, where she is expected to servethe rest of her sentence until September 2014. The OMCT was able to meet Ms.Yorm Bopha in September 2013, during a mission inCambodia in the framework of its project “Defendthe defenders”. She was in good health at thetime of OMCT’s visit.

On 22 November 2013, an appeal hearing for YormBopha will be held at Cambodia's Supreme Courtin Phnom Penh.

Thefacts and circumstances of her arrest, as well as a thorough examination of thecharges and evidence produced against her, clearly suggest that the criminalproceedings against Ms. Yorm Bopha were instigated in retaliation for heractivities as a high-profile land and housing rights advocate. The judicialprocess was marred by significant irregularities and her fundamental rightshave been repeatedly breached. Her sentencing thus represents a grossmiscarriage of justice and is yet another blow to rule of law and thecredibility of Cambodia’s judicial system.

TheOMCT considers that Ms. Yorm Bopha is beingdetained merely for being at the forefront of the campaign in favour of the Boeung Kak Lake community’srights and calling for the release of community members who were arbitrarily arrested in May 2012 after protesting their forcedevictions. As such Ms. Yorm Bopha’s imprisonment amounts to arbitrarydetention as it merely aims at obstructing her human rights activities, therefore contradicting internationalhuman rights standards and Cambodia’s obligations. Accordingly, she should be released immediately andunconditionally.

To do so,please send a letter to the authorities of Cambodia calling upon them toend the harassment against land rights activist YORM BOPHA. You just need toclick on the “Take action” button above, copy the enclosed letter and send itto the addresses provided.

- UrgentAppeal, 28 March 2013: “Refusal by the SupremeCourt to grant bail to Ms. Yorm Bopha”