The Observatory for the Protection ofHuman Rights Defenders, a partnership of FIDH and the World OrganisationAgainst Torture (OMCT), has received new information and requests your urgentintervention in the following situation in Pakistan.

The Observatory has been informed byreliable sources that the Anti-Terrorism Court in Peshawar, Khyber PakhtunkhwaProvince, dismissed a case against Ms. Gulalai Ismail and her parents,Mr. Muhammad Ismail and Mrs. Uzlifat Ismail, following aninvestigation opened after a First Information Report (FIR) was lodged againstthem on July 12, 2019 over charges of “financial support from terroristorganisations”. 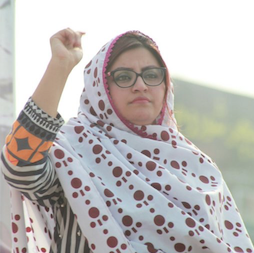 Ms. Ismail, an ethnic Pashtun and womanrights defender, is the founder of the Youth Peace Network and co-founder andChairperson of the NGO Aware Girls[1].Ms. Ismail has led a campaign against extrajudicial killings in Pakistan andwas awarded the 2017 Anna Politkovskaya Award by the organization Reach allWomen in War (RAW). Mr. Ismail is a prominent and vocal human rights activistand the coordinator of Pakistan NGOs Forum.

According to the information received, onJuly 2, 2020, the case was dismissed as the Prosecutor was not able to submitany evidence related to the charges filed against Ms. Ismail and her parents tothe court in the one year the case was open.

On May 22 and 23, 2019, the police inIslamabad filed two FIRs against Ms. Gulalai Ismail, who was charged with“defamation” (Section 500 of the Penal Code), “sedition” (Section 124-A of thePenal Code), “promoting enmity betweendifferent groups” (Section 153-A of the Penal Code) and other charges underSection 6/7 of Pakistan’s Anti-Terrorism Act. The charges stemmed from a speechshe gave at a rally in Islamabad, in which she called for justice in the caseof a 10-year-old girl who was raped and murdered in May 2019 and denounced theauthorities’ inaction to bring the perpetrator(s) to justice[2].As a result, Ms. Gulalai Ismail was forced into hiding.The case is still ongoing. A petition has also been filed before the IslamabadHigh Court in order to ban Ms. Gulalai Ismail’s social media accounts.

At the same time, Ms. Ismail’s relativeshave faced repeated acts of harassment and intimidation by security forces. Forinstance, on May 24, 2019 at dawn, the police raided her family home inIslamabad and threatened her family members. The family’s residence was againraided on May 27. Again, on July 4, 2019, a large group of men in civilianclothes raided three times Ms. Ismail’s house in Islamabad and threatened toharm Ms. Ismail’s younger sister if the former did not cease her work as anactivist. Security forces also took away the family’s driver, interrogated him,and subjected him to physical acts of ill-treatment for about eight hoursbefore he was released.

On July 12, 2019, a FIR was lodged againstMs. Ismail and her parents by the Counter-Terrorism Department in Peshawar,accusing them of having received “financial support from terroristorganizations”. Ms. Gulalai Ismail’s parents received a Bail Before Arrest(BBA) from the court and as a condition of that BBA, had to present themselvesto the court every week. Without any official notification, Ms. Ismail’sparents were also placed on the ECL, and the immigration services refused toissue a new passport to Ms. Ismail’s mother.

During the night of October 17 to 18,2019, armed police officers – some in police uniform, and some in plain clotheswith their faces hidden - knocked at Ms. Gulalai Ismail parents’ house askingfor Mr. Muhammad Ismail to come out of the house, which he refused to do. Thepolice officers stayed outside the house for an hour before leaving.

On October 24, 2019, Mr. Muhammad Ismailwas abducted by unidentified men in black clothes outside of the High Court ofPeshawar, where he was due to present himself as a bail condition. His fate andwhereabouts remained unknown for many hours. It was later discovered that Mr.Muhammad Ismail was taken to the Cybercrime department of the FederalInvestigating Agency (FIA), where he was temporarily detained. On October 25,2020, Mr. Muhammad Ismail was finally presented to the magistrate of PeshawarSession Court, which ordered a 14 days pre-trial detention against him on thebasis of Articles 10 (“cyber terrorism”) and 11 (“electronic forgery”) of the2016 Prevention of Electronic Crimes Act (PECA). The FIR accused Mr. MuhammadIsmail of “broaden hate speech and fake information against GovernmentInstitutions of Pakistan” through his Facebook and Twitter accounts. Mr.Muhammad Ismail had access to his lawyer during the hearing. Mr. MuhammadIsmail was then sent to Peshawar jail, where he was detained until November 25,2019, when he was granted conditional bail.

Please write to the authorities inPakistan, urging them to:

i. Put an end to all acts of harassmentagainst Ms. Gulalai Ismail, Mr. Muhammad Ismail, Mrs. Uzlifat Ismail and theirrelatives, including the lifting of administrative restrictions;

ii. Guarantee, in all circumstances, thephysical integrity and psychological well-being of all human rights defenders in Pakistan;

iii. Put an end to all acts of harassment,including at the judicial level, against all the human rights defenders in Pakistan, and ensurethat they are able to carry out their legitimate activities without anyhindrance and fear of reprisals in all circumstances;

iv. Conform to the provisions of the UNDeclaration on Human Rights Defenders, adopted by the General Assembly of the United Nationson December 9, 1998, in particular with Articles 1 and 12.2;

Please also write to the diplomaticmission or embassy of Pakistan located in your country.

The Observatory for theProtection of Human Rights Defenders (the Observatory) was created in 1997 byFIDH and the World Organisation Against Torture (OMCT). The objective of thisprogramme is to prevent or remedy situations of repression against human rightsdefenders. FIDH and OMCT are both members of ProtectDefenders.eu, the European Union Human Rights Defenders Mechanism implemented byinternational civil society.

[1] AwareGirls is an NGO aiming at strengthening the leadership of young people,especially women and girls, and enabling them to act as agents of change forwomen empowerment and peace building

[2] OnMay 15, 2019, 10-year old girl Farishta went missing near her home inIslamabad. Her parents reported her disappearance the same day, but it tookfour days for the police to register a FIR on the disappearance, and a propersearch was not launched. Her body was finally found in a forest on May 21,2019, leading to public outcry.