Restrictions to freedom of association

The Observatory for the Protection of Human Rights Defenders, apartnership of the World Organisation Against Torture (OMCT) and FIDH, hasreceived new information and requests your urgent intervention in the followingsituation in Egypt. 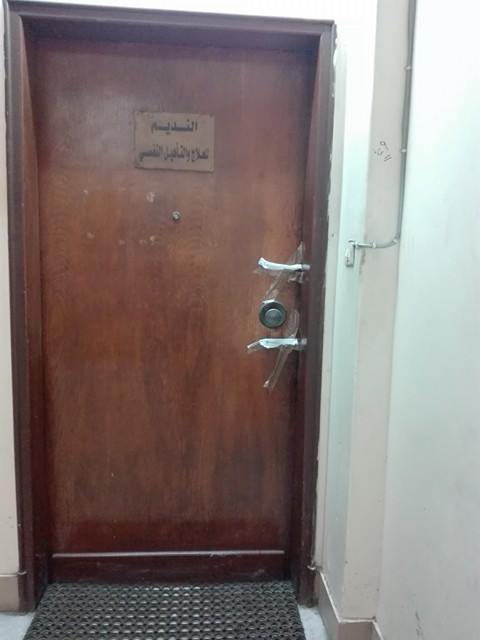 The Observatory has been informed by reliable sources about theadministrative closure by the police of El Nadeem Center for the Rehabilitationfor Victims of Violence and Torture (“El Nadeem Center”)[1],based in Cairo.

According to the information received, on February 9, 2017, at around 11a.m., fifteen police officers in civilian clothes closed and sealed with tapeand red wax the doors of the three flats occupied by El Nadeem. At the time,the premises were vacant as the center is closed on Thursdays and Fridays.

The janitor, who was the only person present on the premises when thepolice’s operation began, tried to oppose the closure and was threatened ofarrest by the police. Alerted by phone about the operation, Ms. Aida Seif El-Dawla, Director and one of the founders of El Nadeem Center, immediately arrived on the premises. She was denied any explanationson the situation, and also threatened of arrest if she kept asking questions.The janitor, accompanied by El Nadeem Centre’slawyer Mr. Taher Abulnasr, was brought to theAzbakeya police station.

The Observatory fears that the police officers were implementing the“administrative closing order” issued on February 17, 2016 by the Ministry ofHealth (MoH) to shut down the center for allegedly “breachinglicense conditions” (see background information).It has to be recalled that on that occasion the closing order only mentioned ElNadeem Center clinic, which occupies only one of the three flats that weresealed this morning[2].

At the time of publication of this appeal El Nadeem Centre’s lawyers,Mr. Taher Abulnasr and Ms. Maha Yucef are present at the Azbakeya prosecutionoffice to file a complaint against the illegal closure of the two companyflats, which are not included in the MoH closing order of February 2016, buthave been prevented from doing so and instead being questioned.

The Observatory recalls that in February 2016El Nadeem Center filed a complaint before the administrative court to challengethe February 17, 2016 administrative closing order. Since then, the judicialprocess has been ongoing and the final court decision was expected to be madepublic in February 2017. Therefore, the police did not wait for the courtruling regarding the closure of the clinic, and in addition closed twoadditional flats, outside the mandate of the MoH.

The Observatory recalls that this year has seen an unprecedentedharassment against El Nadeem Center,with three closure attempts in less than a year, an attempt to freeze thecenter’s assets, as well as a travel ban issued against Ms. Aida SeifEl-Dawla[3].

The harassment campaign against theanti-torture movement in Egypt comes at a time ofrising government pressure on independent human rights groups in Egypt, in thecontext of a dramatic deterioration of the human rights situation in thecountry, marked namely by a grave crackdown on civil society and a notableincrease in cases of torture, deaths in detention and enforced disappearances.

TheObservatory urges the Egyptian authorities to immediately and unconditionallylift the closure order against El Nadeem Center as well as the travel banagainst Ms. Aida Seif El-Dawla.

OnFebruary 17, 2016 at about 4 p.m. two police officers from the AzbakeyaDistrict authority and one city employee ordered the employees of El NadeemCenter to leave the center's premises. The three men delivered an“administrative closure order” signed by the Director of the Health Ministry’sFree Treatment Directorate and addressed to the head of the Azbakeya districtauthority, referring to a violation of Law 453/1954[4]. The document ordered the closure of thecenter based on a decision signed on February 8, 2016, “for breaching licenseconditions” (providing no further information) stamped by the Cairo district onFebruary 15. The implementation of the order was postponed until February 22,2016.

At the beginning of February, the center wasvisited by an employee of the MoH, who came to inspect the center based on anorder given by phone from the MoH himself. The Minister employee did not haveany official papers nor an inspection warrant. The employee of the Ministryordered a copy of the center's license. No breaches of regulations were noted.

OnFebruary 21, 2016, Ms. Aida Seif al-Dawla, Director of ElNadeem Center and Dr. SuzanFayad, Founder of El Nadeem Center accompanied by their lawyer Ms. Maha Yucef and the head of the Cairo'sdoctor's syndicate Dr. SanaaFuad, held meetings with representatives of the Ministry of Health todiscuss about the “administrative closure order” issued against El NadeemCenter on February 17, 2016, for allegedly “breaching licence conditions”,without providing further information. On February 20, 2016, El Nadeem Center'slawyer filed an urgent motion to the Administrative Court of First Instance tosuspend the implementation of the closure order. Meanwhile, the implementationof the order was postponed until February 22 upon El Nadeem Center's requestpending meetings at the MoH.

Duringthe meetings, El Nadeem Center's representatives were informed that the MoH hadordered the closure of El Nadeem Center for violating its license, referring tothe conduct of activities which did not fall within the mandate for which ElNadeem Center had been licensed. Such activities include the publication oftorture reports, which according to the Ministry is not linked withrehabilitation and is not a medical activity, and especially, the publicationin January 2016 of a review of “2015 in numbers” in the Egyptian newspaper Al-Masry Al-youm, summarizing cases of deaths, tortureand medical neglect in detention in 2015 as well as cases of extra judicialkillings reported in the media. However, during the meetings, no professionalor medical breaches were identified with regards to El Nadeem Center'sactivities.

ElNadeem Center's representatives requested a moratorium and the suspension of theclosure order pending an agreement on ways to disengage their medicalactivities from their human rights advocacy activities. The request wasrejected.

In theafternoon of April 5, 2016, the Egyptian MoH sent a delegation to El NadeemCenter to implement the “administrative closure order” and close the Center. ElNadeem directors refused to comply and leave the premises, as the MoHrepresentatives did not present the original document of the closure order, asrequired by law.

TheMoH representatives decided to leave the premises but called the InteriorMinistry to request the intervention of police forces to enforce the order.

OnApril 6, 2016, El Nadeem Centersent another telegram to the Director in charge of non-governmental treatment institutionsand licences at the MoH stating that the closing team did not have an officialorder with them, that the center was not inspected for any violations and thatthey had not been informed of any violations to correct. The memorandumrequested, again, to suspend the closing order and to form a medical inspectioncommittee to inspect the clinic for any professional breaches.

At thesame time, El Nadeem Center’s staff was informed via the media that theAzbakeya district Governorate had filed a complaint against them at theAzbakeya police station for not allowing the closing team to execute theclosing order.

OnNovember 10, 2016, El Nadeem Center was informed that their assets had beenfrozen, following a directive of the Central Bank of Egypt (CBE). Several otherNGOs have been allegedly subjected to the same administrative measure. Thereason to justify the asset freeze is the non-compliance of El Nadeem Centerwith Law 84/2002 (the NGO law). El Nadeem Center does not have yet thepossibility to take legal action as they are still waiting for an officialnotification from the CBE.

TheObservatory would like to recall that El Nadeem Center was not part of case173/2011 (the “foreign funding case” against civil society), within whichframework on September 17, 2016, several human rights defenders and NGOs weresubjected to an asset freeze[2].

Please write to the authorities of Egypt asking them to:

i. Immediately and unconditionally lift the closure order against ElNadeem Center for Rehabilitation of Victims of Violence and Torture, and unsealits premises to allow its staff to carry out their legitimate human rights activities;

iii. Put an end to all forms of harassment against El Nadeem Center, aswell as against all human rights organisations and defenders in Egypt;

iv. Comply with all the provisions of the United Nations Declaration onHuman Rights Defenders, in particular with its Articles 1, 5(b) and 12.2;

The Observatory for theProtection of Human Rights Defenders (the Observatory) was created in 1997by FIDH and OMCT. The objective of this programme is to prevent or remedysituations of repression against human rights defenders. FIDH and OMCT areboth members of ProtectDefenders.eu, the European UnionHuman Rights Defenders Mechanism implemented by international civilsociety.

[1] El Nadeem Center is a clinicregistered in Egypt since 1993 which has provided hundreds of torture victimswith vital services including counseling and legal assistance. The Centerissues monthly summaries of reported instances of torture, deaths, and medicalnegligence in police custody. Many of the Center’s patients say they have been tortured by Egyptiansecurity forces.

[2] The othertwo flats belong to El Nadeem organisation (the company).

[4] The law 453/1954 regulatesindustrial and commercial shops, however, not clinics. The law states that “nobusiness shop subject to this law can be set up or run without the relevantlicense; no changes or amendment in such shops may be executed without theapproval of entity which issued such license.”