The Observatory for the Protection of Human Rights Defenders, apartnership of the World Organisation Against Torture (OMCT) and FIDH, requestsyour urgent intervention in the following situation in Bangladesh. 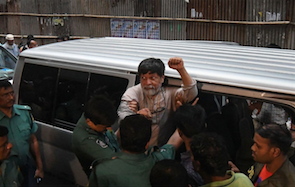 The Observatory has been informed by reliable sources about thearbitrary detention and torture of Mr. Shahidul Alam, photographerand founder of the Drik photo agencyand ofthe Pathshala South Asian MediaInstitute. Mr. Shahidul Alam has been documenting the student protestsover road safety, which have been ongoing in the country for more than a weekand which have been violently repressed by the Government, with more than 100students injured over the weekend.

According to the information received, on August 5, 2018 at around 10.30pm, Mr. Shahidul Alam was forcibly taken from his house in Dhanmondi,Dhaka, by a group of men in plain clothes, who identified themselves asofficers of the Detective Branch (DB) of the Police. Mr. Shahidul Alam’shouse was searched and all the CCTV cameras were destroyed.

His whereabouts have remained unknown until August 6, 2018, whenMr. Shahidul Alam was brought to the Dhaka court by Additional ChiefMetropolitan Magistrate Asaduzzaman Noor, where he was interrogated regardingallegations that he gave false information to the media and for so-called“provocative comments”. These accusations are related to an interview thatMr. Shahidul Alam gave to Al Jazeera on the situation in Bangladesh and tohis Facebook posts over the ongoing

Mr. Shahidul Alam was remanded to custody for seven days in a casefiled under Section 57 of the Information and Communication Technology (ICT)Act, which over the past years has been used to arrest and prosecute severaljournalists who have criticised the Government[1].

During the hearing, Mr. Shahidul Alam reported he had been torturedin custody, and was not able to walk without support. According to his ownwords, the police officers made him wash his bloodied clothes before making himwear them again.

The Observatory recalls that these extremely concerning events havetaken place in a general context of crackdown against civil society inBangladesh, with twelve other journalists and hundreds of students having beenattacked by pro-government forces in the last three days. Several of them havebeen arrested under Section 57 of the ICT Act.

The Observatory strongly condemns the arbitrary detention and torture ofMr. Shahidul Alam as they clearly aim at punishing him for his peacefuland legitimate human rights activities.

The Observatory urges the authorities of Bangladesh to immediatelyrelease Mr. Shahidul Alam and put an end to all acts of torture,ill-treatment and harassment, including at the judicial level, against him. TheObservatory further calls for a thorough, impartial, and transparentinvestigation into the above-mentioned allegations of torture in order toidentify all those responsible, bring them before an independent tribunal, andsanction them as provided by the law.

Please write to the authorities in Bangladesh, urging them to:

i. Guarantee,in all circumstances, the physical and psychological integrity ofMr. Shahidul Alam as well as of all human rights defenders in Bangladesh;

ii. Immediatelyand unconditionally release Mr. Shahidul Alam, as well as all human rightsdefenders detained in Bangladesh, as their detention is arbitrary as it ismerely aimed at punishing them for their human rights activities;

iii. Inthe meantime, guarantee her right to due process and fair trial, as protectedunder international law, including the unhindered access to her lawyer andfamily;

iv. Putan end to all acts of harassment, including at the judicial level, againstMr. Shahidul Alam, as well as of all human rights defenders in Bangladeshand ensure that they are able to carry out their activities without hindrance;

v. Carryout a transparent, impartial, immediate and thorough investigation into theabove-mentioned allegations of ill-treatment in order to identify all thoseresponsible, bring them before an independent tribunal, and sanction them asprovided by the law;

vi. Conformin all circumstances to the provisions of the Declaration on Human RightsDefenders, adopted on December 9, 1998 by the United Nations General Assembly,in particular its Articles 1 and 12.2.;

The Observatory for the Protection of Human Rights Defenders (theObservatory) was created in 1997 by the World Organisation Against Torture(OMCT) and FIDH. The objective of this programme is to intervene to prevent orremedy situations of repression against human rights defenders. FIDH and OMCTare both members of ProtectDefenders.eu, the European Union Human RightsDefenders Mechanism implemented by international civil society.

[1]Under Section 57 of the ICT Act “(1) If any persondeliberately publishes or transmits or causes to be published or transmitted inthe website or in electronic form any material which is fake and obscene or itseffect is such as to tend to deprave and corrupt persons who are likely, havingregard to all relevant circumstances, to read, see or hear the matter containedor embodied in it, or causes to deteriorate or creates possibility todeteriorate law and order, prejudice the image of the State or person or causesto hurt or may hurt religious belief or instigate against any person ororganization, then this activity of his will be regarded as an offence. (2)Whoever commits offence under sub-section (1) of this section he shall bepunishable for a term of minimum of seven years’ imprisonment and a maximum of14 years or a fine of Taka 10 million or both.”