English
Français
Español
Geneva-Paris, May 3, 2016. The murder of Berta Caceres is emblematic ofthe high levels of violence faced by human rights defenders in Honduras.Moreover, other structural problems such as the misuse of criminal law againsthuman rights defenders, the impunity for attacks against them, the absence ofeffective protective measures and the increasing militarisation, make Hondurasone of the most difficult countries in the region for the defence of humanrights, according to the Observatory for the Protection of Human RightsDefenders (OMCT-FIDH). 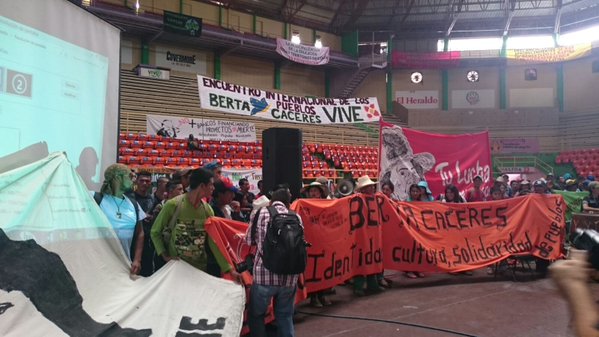 Theplight of human rights defenders in Honduras has received a great deal ofinternational attention in the weeks that followed the assassination of Berta Cáceres[1],a human rights defender who was beneficiary of precautionary measures from theInter-American Commission on Human Rights (IACHR).

Thiscrime, however, is just the tip of the iceberg within the overall context ofhigh levels of violence against defenders in the Central American country. Themost recent examples of this include the murder of Nelson García, another member of ConsejoCívico de Organizaciones Populares e Indígenas de Honduras (COPINH),on March 15, 2016, and 40 further security incidents since July 2015, includingsix murders, against members of Lesbian, Gay, Transgender, Bisexual andIntersex (LGTBI) associations Arcoíris and Asociación Jóvenes en Movimiento (Somos CDC) (AJEM). However,the full list of attacks against defenders is much longer[2].

TheObservatory’s international mission, which took place from 11 to 15 April (formore information see below), concluded that the Honduran State should urgentlytake effective and comprehensive measures to tackle the aforementioned climateof violence and attacks against those who defend human rights. In April 2015,the Honduran National Congress adopted a Law on the Protection of Human RightsDefenders, Journalists, Social Communicators and Justice Operators. While thisis a positive step that recognises the vulnerability of defenders and thelegitimacy of their work, there are some concerns rising from the text of the law,as well as from its lack of enforcement to date, due to the delay in adoptingan implementing decree. The Observatory urges the State to prioritise thedebate on such decree and to guarantee a meaningful participation of civilsociety in the process.

In addition to the implementation of the new law, Honduras must also show afirm commitment to effectively implement IACHR precautionary measures and topromote an enabling environment for those who defend human rights. This lattermust include concrete actions to eradicate statements stigmatising defenders’work made by public authorities and by other actors with strong influence onsociety, such as what happened during the Universal Periodic Review (UPR) ofHonduras to the United Nations (UN). Furthermore, the Observatory recommendsputting an end to the growing militarisation of public security in the country,following the establishment of the military police.

“Institutional andterritorial militarisation, which includes the active participation of thearmed forces in public security tasks, is not only contrary to internationalstandards, but in addition, as per experiences in other countries of theregion, it results in increased violence and attacks against defenders.Therefore, instead of increasing militarisation, the State should strengthencivilian policing, providing it with sufficient resources and ensuring itscompliance with human rights”,said Miguel Martin Zumalacárregui, Head of the OMCT Brussels office.

The Observatory has also received information about the misuse ofcriminal law, often with the complicity or on the initiative of private actors.This creates a context of intimidation against defenders, including inparticular those who defend land rights and journalists, who have been subjectedto judicial harassment. Criminal charges abusively brought against defendersinclude “defamation”, “incitement to violence”, special “usurpation” duringstudent sit-ins and even “sedition”.

“The reform of thecriminal code initiated by the Honduran Congress represents a historicopportunity to put it in line with international standards and to improvedefinitions in the current code which are excessively vague and imprecise andtherefore allow for the criminalisation of the legitimate activities of humanrights defenders”, saidHelena Solà Martín, Latin America Program Coordinator in the OMCT.

In clear contrast with the numerous processes of criminalisation againstdefenders, it is important to highlight the ineffectiveness of the publicprosecutor’s office and the Honduran judiciary in responding to attacks againstdefenders. Impunity is a structural problem, caused by the lack of seriousinvestigations and accountability. A specific unit must be established withinthe public prosecutor’s office to deal with cases against LGBTI defenders, oneof the most vulnerable groups in Honduras. This unit must be sufficientlyequipped with resources to provide a more frequent and effective response toincreasing attacks against members of the LGBTI community. Moreover, theObservatory has received numerous testimonies describing worrying patternsaiming at preventing or deterring defenders from filing complaints, includinglife-threatening attacks and threats of retaliation.

The Observatory has also received consistent information from members ofthe Zacate Grande and San Francisco de Locomapa communities, among others,which demonstrate that concessions of land and natural resources, without thefree, prior and informed consent of communities, are closely related to thehigh rates of attacks and criminalisation against land rights defenders.

“InMarch, the UN Human Rights Council adopted a resolution, promoted by a numberof States including Honduras, aiming at improving protection for defenders ofeconomic, social and cultural rights. In the current context, and to reaffirmtheir commitment to address the structural causes of attacks against landrights defenders, the effective implementation of the International LabourOrganisation Convention 169 on Indigenous and Tribal Peoples should be apriority”, said Anabella Sibrián, CentralAmerica Representative of the International Platform against Impunity.

The Observatory carried out a fact-finding mission inHonduras between April 11 and 15, 2016, aimed at analysing the situation ofhuman rights defenders in the Central American country, with a special emphasison land rights defenders and defenders of the LGBTI community.

TheObservatory mission held interviews with officials from a number of public institutions,including the Supreme Court and the National Human Rights Commissioner, whichwe would like to thank for their collaboration. The mission also met with theOffice of the United Nations High Commissioner for Human Rights (UN OHCHR) inHonduras and with the embassies of the European Union (EU) and the Kingdom ofSpain. The mission also heard testimonies from human rights defenders andrepresentatives of civil society organisations in various meetings in San PedroSula, Tegucigalpa, the Zacate Grande peninsula and the department of SantaBárbara.

TheObservatory for the Protection of Human Rights Defenders (the Observatory) was created in 1997 bythe World Organisation Against Torture (OMCT) and the FIDH. The objective of this programme is to intervene to prevent or remedy situations of repression against humanrights defenders. OMCT and FIDH are both members of ProtectDefenders.eu, the European Union Human Rights Defenders Mechanism implemented by international civil society.

[2] According to a recent report by the Inter-American Commission on HumanRights, between 2010 and 2015, 3,064 defenders were criminalised, 22 killed, 2disappeared, 15 kidnapped, 88 were victims of theft of information and 53 ofsabotage of their means of transport.