The Observatory for the Protection of Human Rights Defenders, a partnership of FIDH and the World Organisation Against Torture (OMCT), has received new information and requests your intervention in the following situation in the Russian Federation. 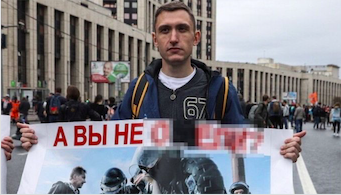 The Observatory has been informed by reliable sources about the continuing judicial harassment and arbitrary detention of Mr. Konstantin Kotov, member of the Moscow-based “For Human Rights” movement and of the Anti-Corruption Foundation, and a volunteer for OVD-Info - an independent media outlet and a public organisation defending the rights of those detained, accused or condemned on politically motivated charges. Apart from participating in numerous peaceful protests himself, he has organized peaceful assemblies and trained protesters on how to behave during such gatherings and when facing arrest.

According to the information received, on April 20, 2020, the Moscow City Court upheld, in a new trial, the conviction of Mr. Konstantin Kotov and sentenced him to one and a half years in a penal colony. On September 5, 2019, the Tverskoy District Court of Moscow had sentenced Mr. Kotov to four years in a penal colony for “repeated violations of the procedure for holding public assemblies” (Article 212.1 of the Criminal Code) (see background information). Following several appeals, the Moscow City Court reduced Mr. Kotov’s sentence from four to one and a half years. He has already served eight months of his prison term prior to the latest decision. The decision of the Moscow City Court is final.

On January 27, 2020, the Constitutional Court ordered a review of the September 5 judgment while upholding, in its reasoning, that the repeated violation of the procedure for organizing rallies is not criminally punishable, “unless it caused harm to the health of citizens or jeopardized public safety” (see background information). According to the Constitutional Court, the Tverskoy District Court of Moscow did not take into account or prove that the actions of Mr. Kotov were harmful or threatened public safety.

The lawyers for the defendant petitioned the Supreme Court of Russia to overturn the conviction in light of the Constitutional Court’s holding, however, the Supreme Court declined jurisdiction advising defendants to pursue an appeal with the Cassation Court, which they did. On March 2, 2020, the Second Court of Cassation of General Jurisdiction overturned the verdict of the Tverskoy District Court of Moscow and referred the case for a new trial to the Moscow City Court.

The Observatory recalls that the judicial harassment of Mr. Konstantin Kotov takes place in a context of repression of pro-democracy protests which began in Moscow on July 14, 2019, after election commissions denied the registration of several opposition members as candidates for the Moscow City Duma elections, on the ground that documents submitted by them allegedly contained numerous violations. Since then, around 100,000 people peacefully took to the streets in Moscow. The authorities detained close to 3,000 peaceful protesters and opened dozens of administrative and several criminal cases, including the so-called “Moscow Case” charging 14 with organizing “mass unrest”.

The Observatory also recalls that Article 212.1 of the Criminal Code, as well as Article 20.2 Section 8 of the Administrative Law Code (“repeated violation by a participant in a public event of the established regulations for holding a picket”), contradict the right to freedom of association and assembly as enshrined in Article 21 and 22 of International Covenant on Civil and Political Rights (ICCPR) and Article 11 of the European Convention on Human Rights (ECHR). Criticism over the application of those articles[2] has previously been expressed by the Head of the Presidential Human Rights Council[3] and the Human Rights Ombudsman of the Russian Federation[4].

Article 212.1 makes no distinction between violent and peaceful assemblies, essentially allowing for a person to be imprisoned for a mere failure to notify the authorities of a demonstration they organized or for taking part in such a demonstration, therefore contravening on its face a number of international and regional human rights instruments, including the ICCPR and the ECHR.

The Observatory strongly condemns the new sentencing and the continuing arbitrary detention of Mr. Konstantin Kotov, which seem to be only aimed at sanctioning him for his legitimate human rights activities. The Observatory calls on the Russian authorities to immediately and unconditionally release M. Konstantin Kotov, and to put an end to any act of harassment, including at the judicial level, against him and all the human rights defenders in the country.

On August 12, 2019, police officers arrested Mr. Konstantin Kotov not far from his home and searched his apartment without a court order. He was subsequently taken to the Moscow Headquarters of the Investigative Committee and charged with “repeated violation of the regulations for organising a public assembly, rally, demonstration, march or picket” (Article 212.1 of the Criminal Code). This followed his participation in three peaceful protests to support political prisoners earlier in 2019. In connection with this summer’s protest movement in the leadup to the September 8 Moscow City Council elections, Mr. Kotov was detained for calling on his Facebook audience to join a rally on Trubnaya Square on July 19, 2019 to protest the denial of registration of several opposition members for the elections, and for taking part in a march demanding an end to political repression[5] and registration of independent candidates to the elections, which took place on August 10, 2019.

On August 15, 2019, Mr. Konstantin Kotov’s lawyer, Ms. Maria Esmont, reported that only 50 hours after her client’s arrest, the case investigator informed her that the preliminary investigation on Mr. Kotov was closed and the case sent to the Tverskoy District Court of Moscow.

On August 16, 2019, Moscow’s Presnensky District Court, on a request by the Investigative Committee, restricted the time allowed to Mr. Kotov and his lawyer to prepare the defense in the criminal case, setting a limit at 12:00 on August 19 (only 72 hours, of which 48 fell on a week-end), therefore restricting Mr. Konstantin Kotov’s right to a legal defense.

On September 5, 2019, Judge Stanislav Minin of the Tverskoy District Court of Moscow condemned Mr. Kotov to four years in a penal colony for repeated violations of the procedure for holding public assemblies (Article 212.1 of the Criminal Code of Russian Federation or, as it is known today, the “Ildar Dadin” Law). His conviction contradicts the Russian Constitution: in January 2017, Russia’s Constitutional Court, while holding Article 212.1 constitutional, ruled that a criminal case cannot be instituted solely on the basis of repeated violations of the procedure, regulated by provisions of the Administrative Code, finding that criminal liability can only be applied if the actions of a protester caused, or have a real chance to cause, harm to citizens or public safety[6].

Please write to the authorities of Russia asking them to:

i. Immediately and unconditionally release Mr. Konstantin Kotov as well as all human rights defenders arbitrarily detained in the country;

ii. Put an end any act of harassment, including at the judicial level, against Mr. Konstantin Kotov, as well as against all human rights defenders in the country;

iii. Ensure in all circumstances that human rights defenders are able to carry out their legitimate activities without any hindrance and fear of reprisals;

iv. Comply with all their international obligations to respect the exercise of the citizens’ right to freedom of association and assembly, as established in the ICCPR, in particular its Articles 21 and 22;

v. Comply with all the provisions of the United Nations Declaration on Human Rights Defenders adopted by the UN General Assembly on December 9, 1998, in particular its Articles 1 and 12.2;

· Permanent Mission of the Russian Federation to the United Nations in Geneva, Switzerland. Fax: +41 22 734 40 44, E-mail: mission.russian@vtxnet.ch

Please also write to the diplomatic representations of the Russian Federation in your respective countries.

[1] Mr. Konstantin Kotov is the second individual criminally condemned for the mere participation in a peaceful assembly under Article 212.1. Until today, Mr. Ildar Dadin, a political activist and prisoner of conscience, was the only person to have been prosecuted for holding three individual pickets. He spent one year in a penal colony, where he was allegedly tortured. On February 22, 2017, the Supreme Court of Russia overturned Mr. Dadin’s conviction and ordered his release. (Decision of the Presidium of the Supreme Court of the Russian Federation No. 43 – P17, 22 February 2017).