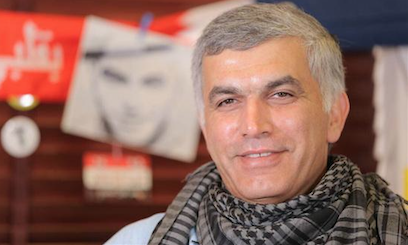 Paris-Geneva,December 16, 2016 - For the fifth time ina row, Court postpones verdict of human rights defender Nabeel Rajab as he remainsjailed for his tweets and his human rights activities in violation of his rightto freedom of expression. Furthermore, the health of Mr. Rajab has seriouslydeteriorated since his arrest in June 2016.

OnDecember 15, 2016, after a fifteen minutes hearing during which Nabeel Rajabwas not allowed to speak, the Fourth High Criminal Court postponedthe verdict until December 28, 2016 and refused to release him, after he hasspent more than six months in pre-trial detention.

“In a sad parody of justice, Bahrainiauthorities are punishing Nabeel Rajab for exercising his right to freedom ofexpression. Mr. Rajab should be released immediately and unconditionally”,said FIDH President Dimitris Christopoulos.

NabeelRajab is co-founder and President of the Bahrain Center for Human Rights(BCHR), founding director of theGulf Center for Human Rights (GCHR), Deputy Secretary General of FIDH from 2012to 2016 and a member of the Middle East advisory committee at Human Rights Watch.He was arrested on June 13, 2016 on several charges and has suffered from poorhealth in prison including irregular heartbeats, an ulcer and problems with hisgallbladder.

NabeelRajab is facing up to 15 years in prison on charges related to commentsposted on Twitter in 2015 about the conditions of detention in Jawprison and the war in Yemen. According to the United Nations, theSaudi-led coalition airstrikes in Yemen have so far been responsible for thedeaths of thousands of civilians[1].

“The detention of one of Bahrain’s mostprominent defender for speaking out on rights violations sends a chillingmessage about the status of human rights in the country”,said OMCT Secretary General Gerald Staberock.

Mr.Rajab is facing charges of allegedly “offending a foreign country” (SaudiArabia) and “offending national institutions” for the comments about thealleged torture of inmates in Bahrain’s Jaw Prison in March 2015. In September2016, an additional charge was brought against Mr. Rajab following thepublication on September 5, 2016 of an Op-Ed in The New York Times withhis by-line, which discussed the conditions of his imprisonment and arrest. Hewas charged with “intentionally broadcasting false news and malicious rumorsabroad impairing the prestige of the state”, which carries an additionalone-year prison term.

Hispeaceful human rights activism and criticism of the Bahraini authorities hasresulted in his imprisonment on two previous occasions, between May 2012 andMay 2014, and between January 2015 and July 2015. In 2013, the United NationsWorking Group on Arbitrary Detention (WGAD) found that Mr. Rajab’s detentionwas arbitrary, noting that the “domestic laws of Bahrain (…) seem to denypersons the basic right to freedom of opinion, expression”[2].

The Observatory for the Protectionof Human Rights Defenders (the Observatory) was created in 1997 by FIDH and theWorld Organisation Against Torture (OMCT). The objective of this programme isto intervene to prevent or remedy situations of repression against human rightsdefenders. FIDH and OMCT are both members of ProtectDefenders.eu, the European Union Human RightsDefenders Mechanism implemented by international civil society.