The Observatory for the Protection of Human Rights Defenders, a partnership of the World Organisation Against Torture (OMCT) and FIDH, requests your urgent intervention in the following situation in the Philippines. 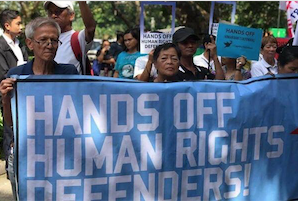 According to the information received, on February 24, 2020, Quezon City Prosecutor Vimar Barcellano granted a motion for reconsideration filed by National Security Adviser Hermogenes Esperon with regard to a perjury complaint he lodged on July 2, 2019 against the ten leaders of Karapatan, RMP, and Gabriela. The complaint had been initially dismissed for “lack of probable cause and/or insufficiency of evidence”.

Mr. Esperon alleged that the ten defendants committed perjury by stating that the RMP was a registered non-governmental organisation at the Securities and Exchange Commission in a petition for a writ of amparo (protection order) and habeas data (access to information) filed by Karapatan, RMP, and Gabriela before the Supreme Court in May 2019, with the aim to seek legal protection against threats and harassment by government officials[1]. The Philippine Court of Appeals denied the petition in June 2019.

On March 3, 2020, nine out of the ten defenders posted bail before the Quezon City Metropolitan Trial Court Branch 37, while Ms. Palabay will post bail upon her return from Geneva, Switzerland, where she is currently conducting advocacy work at the United Nations Human Rights Council.

The Observatory recalls that since President Duterte took power in June 2016, human rights defenders have faced relentless vilification and red-tagging, and have been repeatedly subjected to trumped-up charges and lengthy pre-trial arbitrary detention, with the aim to discredit their legitimate work and to silence all critical voices[2].

The Observatory expresses its utmost concern over the judicial harassment of the ten above-mentioned defenders as it seems to be retaliation against them for trying to seek legal protection and to only aim at punishing them for their legitimate human rights activities.

Please write to the authorities in the Philippines, urging them to:

i. Guarantee, in all circumstances, the physical integrity and psychological well-being of all human rights defenders in the Philippines;

ii. Put an end to all acts of harassment - including at the judicial level - against the above-mentioned ten human rights defenders as well as all other human rights defenders in the Philippines, and ensure in all circumstances that they are able to carry out their legitimate activities without any hindrance and fear of reprisals;

iii. Conform to the provisions of the UN Declaration on Human Rights Defenders, adopted by the General Assembly of the United Nations on December 9, 1998, in particular with Articles 1 and 12.2;

Please also write to the diplomatic representations of the Philippines located in your country.

[2] For more information, see Observatory Press Release, May 24, 2019 and Observation Mission Report, I’ll kill you along with drug addicts - President Duterte’s war on human rights defenders in the Philippines, February 28, 2019.