The Observatory for the Protection of Human RightsDefenders, a joint programme of the World Organisation Against Torture (OMCT)and the International Federation for Human Rights (FIDH) has received newinformation and requests your urgent intervention in the following situation inNepal.

The Observatory has been informed by the Advocacy Forum –Nepal of the physical assault by security personnel from the NepalPolice, the Armed Police Force and the Riot Police against a group of six human rightsdefenders from different organisations, i.e. Mr. Ajit Thakur, from the National HumanRights Commission, Mr. Raj KumarMahaseth from Advocacy Forum – Nepal, Mr. Dev Kumar Mahato from WOREC-Nepal, Mr. Dipendra Das from Manav Adhikar Surakshya Munch (FOPHUR), Mr. Nagendra Sah from Unnat-Nepal and Mr. Birendra Karn from the THRD Alliance, while they were monitoring ademonstration in Danusha district, Janakpur, Nepal[1].

According tothe information, on September 1, 2015, at around 16:30 the six human rightsactivists were monitoring a demonstration from the top of a building when a gascell was thrown to them. They contacted the Superintendent of Police (SP) toreport the incident and suggested the replacement of the police units arguingthat because they were tired and hungry they had become very aggressive. The SPpromised to enquire about the incident but refused to change the security forcearguing there was no other unit available.

A fewminutes later, at 17:15, the human rights defenders decided to help one of thedemonstrators, whom, according to the information received, had been shot bythe police and was lying on the main road, which, at the time, was empty.However, when they arrived, confrontations had started between the police andsome demonstrators. The latter tried to look for shelter in a small street, but4-5 minutes after they were surrounded by 50 officers from the Nepal Police,the Armed Police Force and the Riot Police. The six activists were wearinghuman rights jackets and showed their identification documents. Nevertheless,they were accused of helping the demonstrators and were verbally intimidated,beaten with sticks and kicked by the security forces for about 7-8 minutes. Theintervention of four or five members of the Nepal police, who protected themwith their shields, prevented the defenders from being more severely injured,and the assault ultimately ended when three Police Inspectors arrived on thespot and stopped the security forces. However, as the human rights defenderswere being moved to a safe place, a group of security personnel threw stones atthem and hit Mr. Nagendra Sah’s back,which required his transfer for medical treatment at the Janakput CityHospital. 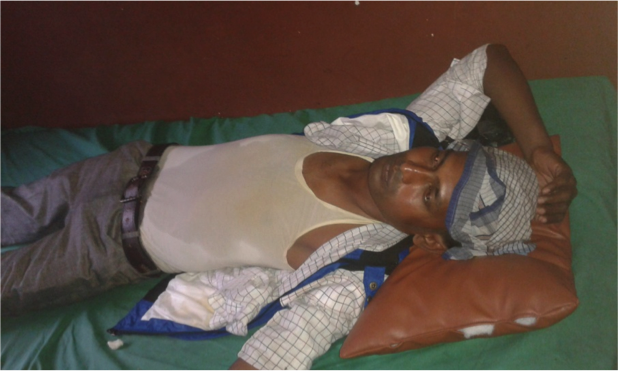 TheObservatory strongly condemns the physical assault against the six human rightsdefenders as a result of their human rights activities, all the more so as theyhad identified themselves as human rights defenders to the police. TheObservatory calls for an immediate, thorough and transparent investigation intothe assault, in order to identify all those responsible, bring them before anindependent tribunal, and apply them the sanctions provided by the law.

The Observatory urges the authorities of Nepal to:

i. Order an immediate, thorough, transparent investigation into the attackagainst the 6 human rights defenders, in order to identify all thoseresponsible, bring them before an independent tribunal, and apply them thesanctions provided by the law;

ii.Provide compensation and redress to the injured human rights defenders and takeall necessary measures to provide guarantees of non-repetition;

iii.Guarantee the physical and psychological integrity of the 6 human rightsdefenders as well as that of all human rights defenders in Nepal;

iv. Conform with the provisions of the UNDeclaration on Human Rights Defenders, adopted by the General Assembly of theUnited Nations on December 9, 1998, especially:

- Article 1, which states that “everyone has theright, individually and in association with others, to promote and to strivefor the protection and realisation of human rights and fundamental freedoms atthe national and international levels”;

- Article 5, which underscores the right of everyindividual to form, join, and participate in non-governmental organizations;and

- Article 12.2, which provides that the State shall“take all necessary measures to ensure the protection by the competentauthorities of everyone, individually and in association with others, againstany violence, threats, retaliation, de facto or de jure adverse discrimination,pressure or any other arbitrary action as a consequence of his or herlegitimate exercise of his or her rights”;

Please also write to diplomaticrepresentations of Nepal in your respective countries.

[1] On September 1, 2015, severaldemonstrations took place and ended in violent outbreaks between the police andthe demonstrators. These events unfolded in the context of an indefinitestrike, called by the United Democratic Madhesi Morcha on August 16, 2015.Basic services such as educational institutions, banks, markets have remainedclosed in areas between Janakpur and Terai Madesh.