English
Français
Español
New informationCHN 002 / 0417 / OBS 034.2Sentencing /Incommunicado detentionChinaDecember 5, 2017
The Observatory for the Protection of Human Rights Defenders, a partnership of FIDH and the World Organisation Against Torture (OMCT), has received new information and requests your urgent intervention in the following situation in China.
New information: The Observatory has been informed by the Taiwan Association for Human Rights (TAHR) about the continued incommunicado detention and sentencing of Mr. Li Ming-Che, Programme Manager at Wen-Shan Community College in Taiwan and a volunteer with the Taiwan-based NGO Covenants Watch[1]. 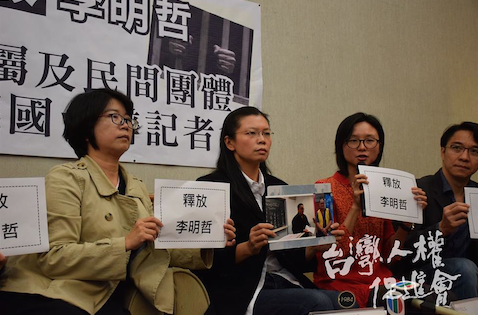 According to the information received, on November 28, 2017, Yueyang Intermediate Court sentenced Mr. Li Ming-Che to five years in prison after founding him guilty on charges of “subverting State power”. The court also stripped him of all political rights in China for two years. Mr. Li Ming-Che will not appeal the verdict.

The trial of Mr. Li Ming-Che had opened before the Yueyang Intermediate Court, Hunan Province, on September 11, 2017. During the first hearing, Mr. Li Ming-Che pleaded guilty to the charges brought against him. Li Ming-Che confessed that he had “disseminated articles and essays that maliciously attacked and defamed the Chinese government, the Chinese Communist Party and China’s current political system,” and that he had “incited the subversion of State power.” It is feared that this confession, which was filmed and released online on Youtube by Yueyang Court, was likely made under pressure from Chinese authorities.

The Observatory recalls that since the beginning of his detention on March 19, 2017, information on the whereabouts of Mr. Li Ming-Che have been very limited, as his family has had access to him only once. Moreover, his lawyer was appointed by the Court.

In addition, the Observatory remains concerned about Mr. Li Ming-Che’s health, as he suffers from hypertension. In recent years, Mr. Li Ming-Che has been sharing the experience of Taiwan’s democratic process with his Chinese friends online and has been sending them books on human rights and modern history. In early 2016, he was active online to encourage donations to support the families of Chinese human rights activists who had been detained by Chinese authorities.

The Observatory condemns the conviction and sentencing as well as the ongoing arbitrary and incommunicado detention of Mr. Li Ming-Che, which seems to be merely aimed at punishing him for his legitimate and peaceful human rights activities. The Observatory urges Chinese authorities to immediately and unconditionally release Mr. Li Ming-Che and to ensure his psychological and physical integrity. Background information: On March 19, 2017, Mr. Li-Ming Che was detained after entering mainland China for personal matters from Macau through the Gongbei Port immigration checkpoint located in Zhuhai, Guangdong Province. Chinese authorities refused to disclose his fate or whereabouts until March 29, 2017, when they revealed that Mr. Li Ming-Che was being detained at an undisclosed location and investigated by State security police on suspicion of “endangering national security”. On April 10, 2017, Mr. Li Ming-Che’s wife, Ms. Lee Ching-yu, attempted to fly to Beijing to seek information about her husband's detention but she was prevented from boarding her flight after Chinese authorities revoked her travel pass.

On May 26, 2017, Chinese authorities finally confirmed the detention of Mr. Li Ming-Che, more than two months after his arrest by Hunan provincial security units.

On September 11, Mr. Li Ming-Che was briefly allowed to see his family, for the first time since his arrest.

Please write to the Chinese authorities to urge them to:

i. Guarantee in all circumstances the physical and psychological integrity of Mr. Li Ming-Che as well as that of all human rights defenders in China;

ii. Immediately disclose Mr. Li Ming-Che’s whereabouts and release him immediately and unconditionally as his detention is arbitrary since it only seems to aim at punishing him for his human rights activities;

iii. Guarantee the access of Mr. Li Ming-Che to a lawyer and his family members;

iv. Put an end to all acts of harassment - including at the judicial level - against Mr. Li Ming-Che and all human rights defenders in the country so that they are able to carry out their work without hindrance;

v. Comply with the provisions of the United Nations Declaration on Human Rights Defenders, in particular with its Articles 1, 6(c) and 12.2;

vi. Ensure in all circumstances respect for human rights and fundamental freedoms in accordance with the Universal Declaration on Human Rights and other international human rights instruments signed or ratified by China.
Addresses:

Please also write to the diplomatic representations of China in your respective countries. ***Paris-Geneva, December 5, 2017