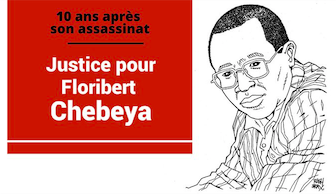 Paris-Geneva-Kinshasa, June 2, 2020 - Ten years after the murder of Floribert Chebeya and Fidèle Bazana, justice has still not been rendered, denounced today the Observatory for the Protection of Human Rights Defenders (FIDH-OMCT), the League of Electors, the Lotus Group, ASADHO and Voice of the Voiceless for Human Rights (VSV). Our organisations call for an international mobilisation urging that the alleged killers be prosecuted and punished.

While a mere parody of justice has been carried out in the past decade in the trial of the alleged killers of human rights defender Floribert Chebeya and his driver, Fidèle Bazana, hopes are now turning to the country’s recently elected President, Felix Tshisekedi. Floribert Chebeya was the Executive Director of VSV and a member of the General Assembly of the World Organisation Against Torture (OMCT). Fidèle Bazana was also a member of VSV. Congolese civil society and the families of the victims await the reopening of this trial, as well as the dismissal and prosecution of general John Numbi Banza Tambo. The latter, considered to be the commissioner of these crimes, was, at the time of the events, inspector general of the police and is now inspector general of the Congolese army. He has been under European Union sanctions since 2016 for his alleged role in undermining democracy and the electoral process in the DRC.

"Although the DRC has a new president, the Congolese judiciary seems to remain unchanged. We are waiting for a firm push to reopen the trial, and for a fair trial to finally take place in the DRC. Justice must be served for Floribert and Fidèle" Alice Mogwe, President of FIDH.

“When I last saw Floribert, shortly before his death, I asked him not to return to the DRC because of the threats against him. But he told me that he could not keep running away and that he had to go back. I never saw him again”, said Aminata Dieye, member of OMCT’s Executive Council. “Floribert was a true activist, a calm man with a big heart. Ten years after their deaths, we haven’t forgotten Floribert and Fidèle and we pay tribute to their fight against torture and impunity in the DRC. There is an urgent need to put an end to the intolerable impunity that persists and to finally get to the bottom of their double murder”, she concluded.

On June 23, 2011, the Kinshasa-Gombe Military Court sentenced four of the eight accused police officers to death sentences, life imprisonment for a fifth, and acquitted the remaining three. On September 17, 2015, four of the police officers were acquitted on appeal and the sentence of the fifth was lightened- an egregious affront to the victims’ families. In parallel, on June 2, 2014, a complaint was filed with the Senegalese courts on the basis of the Senegalese Extraterritorial Jurisdiction Act. This complaint targeted one of the alleged perpetrators of the double murder of Floribert Chebeya and Fidèle Bazana, who had taken refuge in Senegal. On August 26, 2014, the Senegalese judiciary opened a judicial inquiry into this double murder, while the case remained stalled in the DRC. To date, however, no ruling has been issued by the Senegalese judiciary.