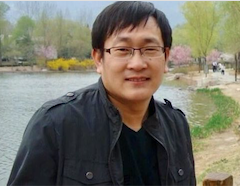 Chinese human rights lawyer Wang Quanzhang endured more than 1200 days of arbitrary detention in the absence of any due process and in January 2019 was sentenced to four and a half years in prison. Wang was released on 5 April 2020 after completing his sentence, but has yet to reclaim his personal freedom. The Chinese authorities used the pandemic as a pretext to restrict Wang’s right to reunite with his family in Beijing; instead they sent him to Jinan, the location of his household registration, for fourteen days of “quarantine”.

During the quarantine, his communication with the outside world is being unreasonably and unlawfully restricted. The phone for which he paid was confiscated by a community officer, and agents were sent to guard his door. Wang’s cousin and a delivery employee trying to reach him in Jinan were brought to the police station, threatened and interrogated. Evidently, Wang Quanzhang is still living under the constant surveillance of the authorities despite his release, and we fear that he will continue to be effectively under house arrest, much like lawyer Jiang Tianyong who was also released during the past year.

We strongly condemn such practice, and ask that Chinese government to:

1. Ensure Wang Quanzhang’s personal freedom after his release, including his right to communicate with the outside world, and to reunite with his family in Beijing

2. Ensure Wang Quanzhang and his family’s rights to privacy, home and family, as well as their freedom of movement and residence within China, as guaranteed by the Universal Declaration of Human Rights Articles 12 and 13; and

3. Protect Wang Quanzhang and his family from any future harassment, surveillance or persecution.

Using the Pandemic as a Pretext to Restrain Freedom

China is notorious for its tarnished human rights record. The catastrophe of the COVID-19 virus, which had swept China and the globe, killing scores of thousands, is attributed to the long-term violation of basic civil rights and freedoms by China. News of the initial outbreak was suppressed. Not only did Dr Li Wenliang and other medical professionals die as a result, but other whistle-blowers and activists such as legal scholar Xu Zhiyong, citizen journalist lawyer Chen Qiushi and Wuhan resident Fang Bin were suppressed, and subjected to enforced disappearances. The harassment, surveillance and effective house arrest of Wang Quanzhang after his “release”, as well as the persecution of his family, vividly illustrate China’s use of the pandemic to extend Wang’s imprisonment in violation of Chinese and International Law.

Police told Wang’s sister that Shandong Province had ordered that all individuals being released from prison must return to their household registration locations to be quarantined for 14 days. Wang was therefore sent to his property in Jinan on 5 April upon release. However, the authorities have yet to provide Wang’s family with any document containing such an order, and the Beijing municipal government has not banned anyone from Shandong.

According to Article 38 of the Prison Law of the People's Republic of China, those who are released from jail shall enjoy the same rights as any other citizens. This should include their freedom of movement and communication. Even if Wang Quanzhang must practise home quarantine immediately upon release, he has the right to do so in Beijing. Furthermore, Wang’s property in Jinan was originally rented, but the police forced the tenant to leave. Evidently, the authorities intend to prevent Wang Quanzhang from returning to Beijing no matter what.

Regardless of the location of Wang’s quarantine, he has the right to communicate with anyone at any time. On the day of his release, Wang already purchased a new mobile phone from an official in the area of his registered residence, in order to communicate with his family and friends. The next day, 6 April 2020, Wang Quanzhang called his wife Li Wenzu in the evening, telling her that the local official had confiscated his phone, and would only allow him to call his family once a day, using a borrowed phone. Furthermore, the authorities have also intercepted supplies sent to Wang by family and friends; moreover, even the delivery person was taken to the police station to be interrogated. When Wang Quanzhang’s cousin arrived at the gate of the district in which Wang’s property is located, he was stopped and taken to the police station for interrogation. He was threatened and warned not to contact Wang in person.

The day after his release, Wang Quanzhang had a phone conversation with fellow 709 lawyer Li Heping, during which Wang revealed that he had undergone nucleic acid testing five times before his release; Wang also stated that he has a hole in his eardrum, and that he needs to press the phone to his ear in order to hear clearly. When Li Heping asked him about his weight, he tried to avoid the topic, and hastily turned to a different subject. That was the day on which Wang’s phone was confiscated.

Li Wenzu visited Wang Quanzhang several times before his release, and found that he looked gaunt, his memory had worsened, and he had even lost a few teeth. There was also news that Wang was tortured during his time in prison, and was forced to take unidentified medications. The authorities’ actions to prevent Wang Quanzhang from interacting with the outside world appear in part to be motivated by the desire to suppress evidence of Wang’s inhuman treatment during his incarceration.

On 3 April 2020, two days before Wang Quanzhang’s release from prison, his sister Wang Quanxiu was informed by police officers that she would not be allowed to travel to Linyi Prison in Shandong to meet Wang after his release. The next day, on 4 April, police in plain clothes were stationed at her workplace to prevent her from going to Linyi Prison. Police snatched her phone from her after she had filmed the police who were threatening her. She was dragged onto a car and almost taken away. After negotiations between her office manager and the police, Wang Quanxiu was eventually brought back to the office and detained there.

We once again urge the Chinese government to comply with Article 37 of the Constitution of the People’s Republic of China, to comply with Articles 3, 12 and 13 of the Universal Declaration of Human Rights, to respect the personal freedom of Wang Quanzhang after his release, and to cease and desist from imposing any form of house arrest, surveillance or restriction on his personal freedoms and to allow him to return to Beijing and reunite with his family..

International Federation for Human Rights (FIDH), within the framework of the Observatory for the Protection of Human Rights Defenders

International Observatory for Lawyers in Danger

Justice and Peace Commission of the Hong Kong Catholic Diocese

Office of the Hon. Kwok Ka-ki

World Organisaiton Against Torture (OMCT), within the framework of the Observatory for the Protection of Human Rights Defenders