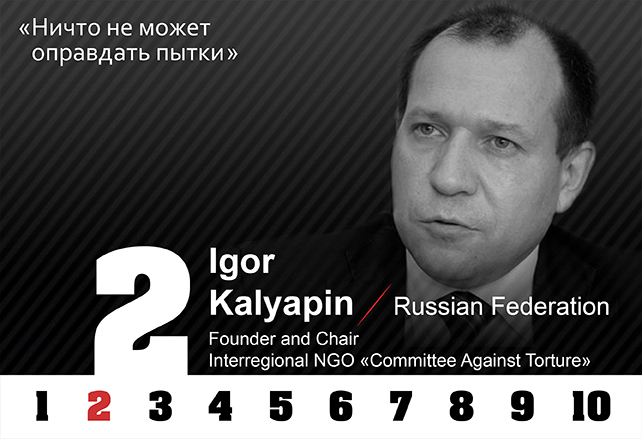 Today, what is the biggest challenge in the fight against torture in your country? Can you take stock of the situation of torture and ill-treatment in your country (the context, the extent of the problem, the type of victims and perpetrators, etc.)?

Today the main reason for torture in Russia is an atmosphere of total impunity for the perpetrators. They are more than sure that they will never be punished for what they have done. After a number of reforms that started in 2007 we still don’t have a really independent investigational body that is able to work effectively with torture complaints. The investigators are formally and informally connected with the police officers, who are the main perpetrators of torture crimes. I can say that there is no political will at the moment to deal with investigations of torture seriously – all reforms are realized in order to report to international bodies and make up an activity aimed to improve the situation, but none of them delivered any plausible results.

And I must say that torture mostly by police is extremely widespread in Russia. You won’t find a single person in the country who is not aware that police abuses people. A couple of years ago we had a huge sociological research all over Russia in order to evaluate the prevalence of the problem in different parts of the country and discovered that 20% of the respondents at least once in their life have come across police abuse personally. After the research we have published a book « Every fifth» that contains pictures and short stories of victims of torture: we wanted to show that everyone is under the risk. One hasn’t to be a criminal or a suspect in order to get into trouble with the police – he or she can be in a wrong place at the wrong time. Nobody is safe.

The vast majority of the application we receives is about torture or other form of ill-treatment committed by police or about conditions of detention in prisons. At the same time torture still exists in army and psychiatric hospitals.

According to your experience, what are the root causes of torture and impunity?

Impunity causes torture, it is obvious. And what causes impunity? In Russia, law enforcement officials have limited time to investigate a crime: either they can make a lot of efforts to find out the details of the incident or lock someone to a heating for a night, beat him and get self-confession in the morning. They know that they won’t be punished for that and choose the quickest way. They have statistical plans to report on a number of administrative arrests each quarter and by the end of it, if they don’t have enough to report, they will fabricate the cases and beat those who try not to obey.

The main root is that there is no clear political will to fight against torture and until it comes it will be extremely hard to change something on a serious level.

What is your approach and what kind of activities do you carry out to fight against torture and ill-treatment in your country? Can you give us examples of achievements linked to these activities?

The Russian NGO Committee Against Torture (CAT) has invented a method how to deal with independent public investigations. The main idea of it is that if the investigators don’t want to investigate torture we will do it instead of them and pack the official criminal case with such amount of sufficient evidences that there will be no other choice than to transfer it to court. It is a simple explanation, but the method itself is quite sophisticated since we had to invent a way to collect and produce evidence without having any special powers or abilities.

At the same time we provide medical treatment and rehabilitation for torture victims: firstly because we can’t leave them with their health problems and secondly because the treatment itself is a way of getting additional evidences. We also do a lot of analysis work and lobbying in order to target the situation on a systematic level, we work with all available international and regional mechanisms as well. Plus to that we provide trainings for human rights defenders, practicing lawyers, police, judges and investigators and pay certain attention to public activities and promotion of idea that torture is one of the most severe crimes.

I can say that we have achieved quite a lot since 2000 when CAT was established. We have managed to lobby reform of investigational system in the country through United Nations Committee Against Torture. The first precedent judgment on torture in police in Russia delivered by European Court of Human Rights (ECHR) was our case Mikheev v Russia and it is still one of the most important cases in this field. CAT was the first to bring perpetrators to justice for torture in Russia, because before that the problem was absolutely neglected and there were no successful cases. And we did help several hundreds of people who have lost not only their health but, that is more important, their belief in justice. 100 police officers were imprisoned as a result of our activities and victims received nearly 1 million Euro of compensation for torture all in all. 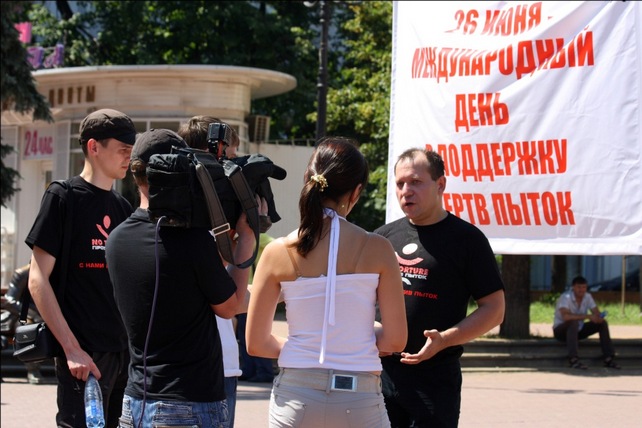 What obstacles do you encounter daily when carrying out your activities?

The main obstacle we have is the same to the reason of torture: lack of effective investigation and absolute lack of will to investigate. Every case is a challenge and we never know for how many years we have to commit ourselves to deal with each of them.

Do you feel threatened because of your activities? Do you face any interference in your work? If this is the case, can you kindly precise.

What needs to be done so that «Nothing justifies torture» becomes a reality in your country?

The ban on torture should be promoted widely, because still quite many people accept its use if a person is a terrorist or if the person killed or raped a child etc. It is vitally important not only to work in the legal field, but also approach people and explain to them that it is not acceptable in any case.

Public campaigns, support of the victims of torture, write support letters, can play a very important role in the fight against torture.