Paris, Geneva,Mexico, 25 February 2016 –The criminalization of human rights defenders in the context of the extractionof natural resources and megaprojects is becoming a very worrisome phenomenonin Latin America, denounces theObservatory in a report published today in Mexico. Entitled “The criminalization ofhuman rights defenders in the context of industrial projects: a regionalphenomenon in Latin America”, this document also points to the roleof businesses, civil servants, public prosecutors, judges, and the State, amongothers, in this phenomenon.

“Criminalizingand harassing those who defend human rights and land rights is becoming arecurring pattern in Latin America. It is not an isolated phenomenon”points out the Observatory. “Judges and attorneys often have their share ofresponsibility with regard to this criminalization. This must end immediately.They can no longer be complicit”. 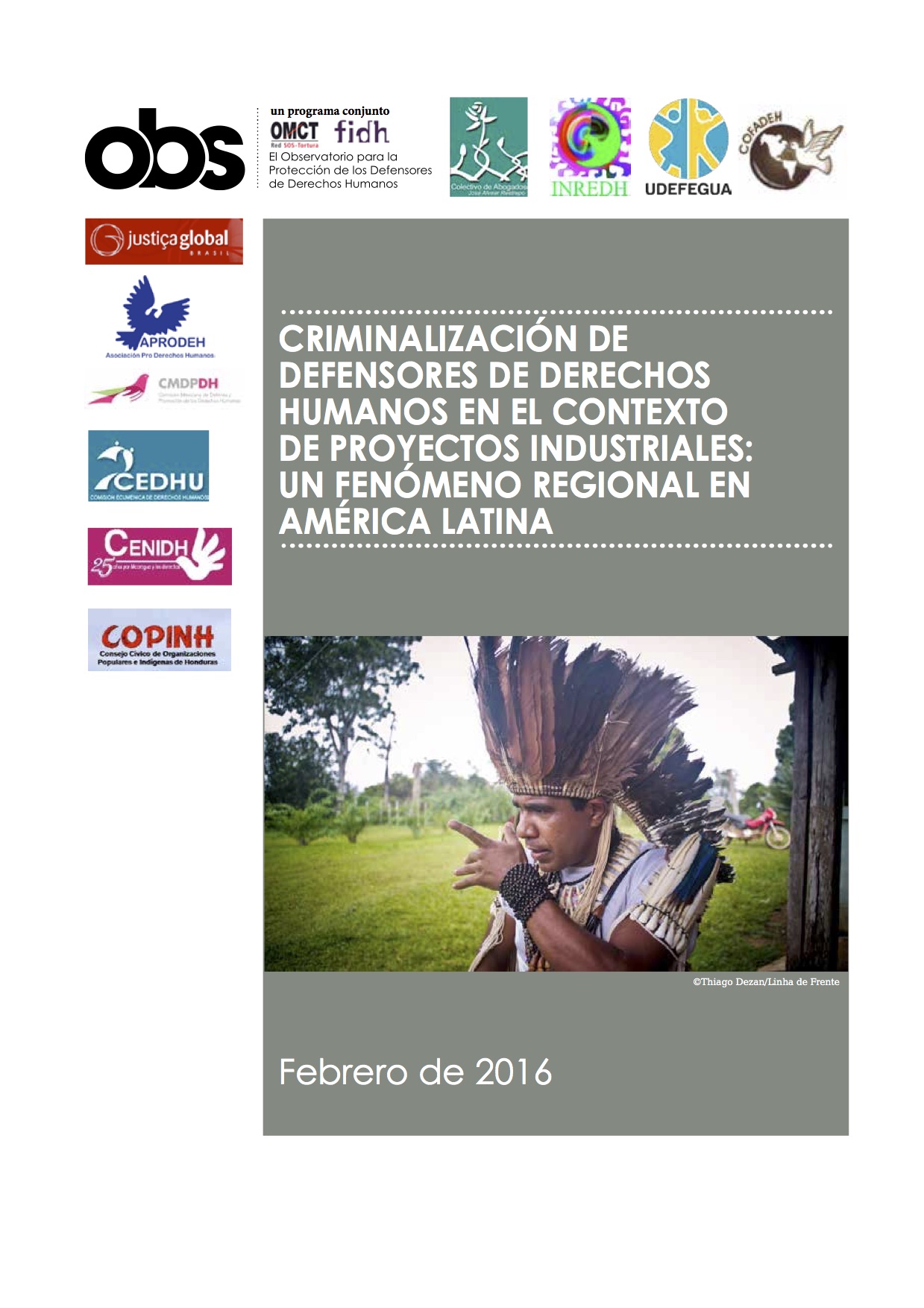 Firstly, it is in the contexts of extraction of naturalresources and of megaprojects that criminalization of human rights defenders ismost virulent. They are targeted because they promote landrights and defendvulnerable groups, such as indigenous, afro and rural communities. But alsobecause they have a key role in drawing attention to human rights violationsrelated to property, exploitation of land and resources, the environment, waterrights and respect for labor rights, among others. All of the cases documentedin the report demonstrate how the inappropriate use of criminal law tocriminalize community leaders contributed to the collapse of their capacity toact.

Moreover, the report emphasizes the key role of businessesand the judiciary in criminalizing defenders, despite their human rightsobligation and the legitimacy of peaceful social protest. Nearly all criminalcases against defenders have been initiated by businesses, who request theapplication of emergency laws such as, for example, anti-terrorism legislation.

Furthermore, the report denounces the lack of independenceand impartiality of justice and its determining impact on the criminalizationof defenders. In most of the cases presented, additionally to chargingabusively the defenders, the Public Ministry leads criminal action and callsregularly for preventive prison. In many cases defenders are prosecuted once,twice or more. This is extremely serious in that it violates the minimum guaranteesof due process and the right to personal liberty. Likewise, although judges donot always convict defenders, they almost systematically assent to requests forcautionary measures such as preventive arrest.

The Observatory urges the judiciary of the above-mentionedcountries not to be accomplices to the undue criminalization of human rightsdefenders and to initiate a period of reflection within the judicial systemon the need for practicing justice in a way that respects the equality of allparties without favoring political and economic interests.

The Observatory,an FIDH and OMCT venture, is dedicated to the protection of human rightsdefenders and aims to offer them concrete support in their time of need.

Organizations who contributed to theelaboration of this report :

FIDH,within the framework of theObservatory for the Protection of Human Rights Defenders

WorldOrganisation Against Torture (OMCT), within the framework of the Observatoryfor the Protection of Human Rights Defenders