Paris-Geneva, June 25, 2015. Human rights defenders in Bahrain are operating in a shrinking space, says the Observatory in a report published today. The report documents the judicial harassment of 11 human rights defenders including lawyers, teachers, doctors or bloggers. All have suffered or been threatened with imprisonment, torture or statelessness as a consequence of their activities in defense of human rights. “There is no doubt that the judiciary is doing everything to help the regime silence dissent and muzzle those who speak out against the human rights violations being perpetrated in Bahrain”, said Safya Akorri, French lawyer mandated by the Observatory to collect testimonies from Bahrain about the situation of human rights defenders. Four years after the massive pro-democracy demonstrations at Pearl Roundabout, the Bahraini legal arsenal has evolved to allow even greater repression of the right to freedom of expression and assembly. Amendments made to the anti-terrorism laws in 2013 and to the Bahraini citizenship law in July 2014, the latter of which enables the Ministry of Interior to revoke the citizenship of those it deems to have “caused harm to the interests of the Kingdom”, have ravaged Bahraini civil society. “Human rights defenders in Bahrain are living the worst moments of their lives”, reports Mohammad al-Maskati, Former President of the Bahrain Youth Society for Human Rights (BYSHR) and current Digital Security Consultant at Front Line Defenders. While the trial of FIDH Vice Secretary General, Nabeel Rajab, President of the Bahrain Center for Human Rights (BCHR), was the impetus for the mission, the new report also documents the cases of lesser-known human rights defenders, all of whom have suffered judicial harassment at the hands of the Bahraini authorities. Some of them are currently in prison and have been exposed to severe torture.From teacher Mahdi Abu Deeb, nurse Ibrahim Al-Dimistani, blogger Naji Fateel, women's rights activist Ghada Jamsheer, activist Hussain Jawad, lawyer Taimoor Karimi, activist Abdulhadi Al-Khawaja, blogger Zainab Al-Khawaja to activists Mohammed Al-Maskati, Nabeel Rajab and Sayed Ahmed Al-Wedaei they are prosecuted for a variety of charges, ranging from “obstructing traffic” to “collecting funds from Bahrain and abroad without authorisation," from “illegal gathering” to “inciting hatred against the regime”[1]. Such constant judicial harassment has psychological, social and physical impacts on its victims and impedes those subjected to such abuse from conducting their human rights work. Some of them have also reported suffering severe acts torture while in detention. To date, the authorities have failed to conduct effective investigations into such allegations. “We reiterate our call for an immediate release of FIDH Deputy Secretary General Nabeel Rajab, and of all human rights defenders currently in arbitrary detention in Bahrain”, FIDH President Karim Lahidji said today. ”It’s time for the Bahraini authorities to leave behind the empty rhetoric of human rights reforms at the international level and to actually undertake genuine and effective reforms in line with their international obligations and commitments”, OMCT Secretary General Gerald Staberock concluded. 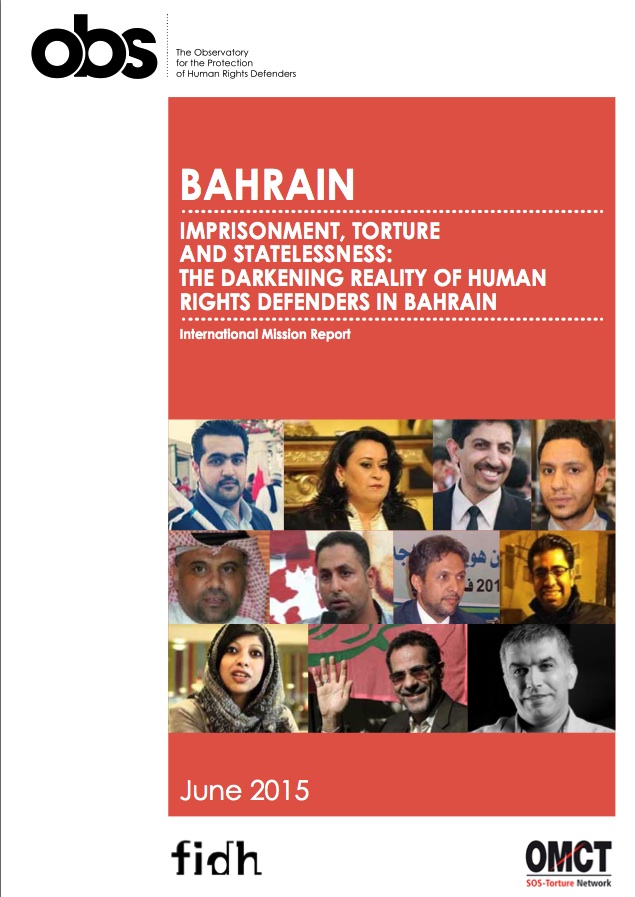 The Observatory for the Protection of Human Rights Defenders (OBS) was created in 1997 by FIDH and OMCT. The objective of this programme is to intervene to prevent or remedy to situations of repression against human rights defenders.

See the Observatory's mission report for a list of recommendations to the Bahraini authorities, the United Nations, the European Union and other foreign diplomacies.