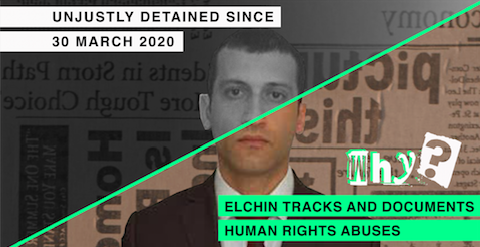 As a human rights lawyer and journalist, Elchin Mammad is used to speaking his mind. The 42-year old attorney presides over the Social Union of Legal Education of Sumgait Youth (SULESY), a non-governmental organisation that provides free legal assistance to low income families and non-profits. His busy schedule also includes a job as the editor in chief of Yukselish Namine, a newspaper specializing in human rights concerns.

Or rather, included. On 30 March 2020, a few days after he had published online a critical report on the human rights situation in Azerbaijan, police officers arrested Elchin at his home in Sumgait, a town north of the capital Baku. The police claimed to have found stolen jewellery at his office.

The next day, Sumgait City Court remanded Elchin Mammad in custody for three months as a criminal suspect. The father of two young children remains detained under trumped-up charges at Shuvalan pre-trial detention centre no. 3.

This latest twist is nothing new to Elchin. He has faced harassment from the authorities in connection with his human rights work since 2015, when his organisation was investigated. He was subjected to arbitrary detention, repeatedly summoned and questioned by the police. He was also placed under travel restrictions in connection with the investigation.

On 15 May, the government officially stated that there are 46 COVID-19 infected inmates in the country. This puts Elchin’s life at risk, particularly as he suffers from hepatitis C. Azerbaijan’s prison system is plagued by severe overcrowding, while food, medication, sanitation, and even drinking water are substandard. This has led to the European Court of Human Rights repeatedly ruling that detention conditions in the country amount to inhuman and degrading treatment. In times of pandemic, such an environment risks becoming an incubator for the novel coronavirus.

Elchin’s case is particularly emblematic of the Azerbaijani authorities’ abusive and arbitrary methods used to silence critical voices. In 2014, the government launched an unprecedented crackdown on civil society. Prominent human rights defenders joined other political prisoners in Azerbaijan’s jails, on fabricated criminal charges of financial irregularities. Although most were released after spending years in prison, as a result of international pressure, the situation of defenders remains precarious.

The authorities have seized the coronavirus outbreak as an opportunity to intensify the crackdown on civil society. On 19 March, President Ilham Aliyev used his yearly address to the nation on the Novruz Bayrami holiday to promise “new rules” for the duration of the pandemic, threatening to clear the country of “traitors” and “enemies” and to “isolate the fifth column”. To people like Elchin, who has dedicated his life to the defence of the downtrodden, these ominous words might now ring like a death sentence.