Geneva-Paris, 26 June 2018 – Humanrights defenders and social protestors in Peru face daily stigmatisation,criminalisation, punishment and repression. The Observatory for the Protectionof Human Rights Defenders (OMCT-FIDH) which has carried out a fact-finding mission to the country,denounces a complete lack of protection from the authorities.

Thesituation of human rights defenders in Peru is not well known among theinternational community despite the enormous difficulties faced by those whodefend human rights in the country. According to figures from the NationalHuman Rights Coordination Group (CoordinadoraNacional de Derechos Humanos), 119 defenders have been killed since 2011,and in 2017 more than 800 defenders faced criminal proceedings. 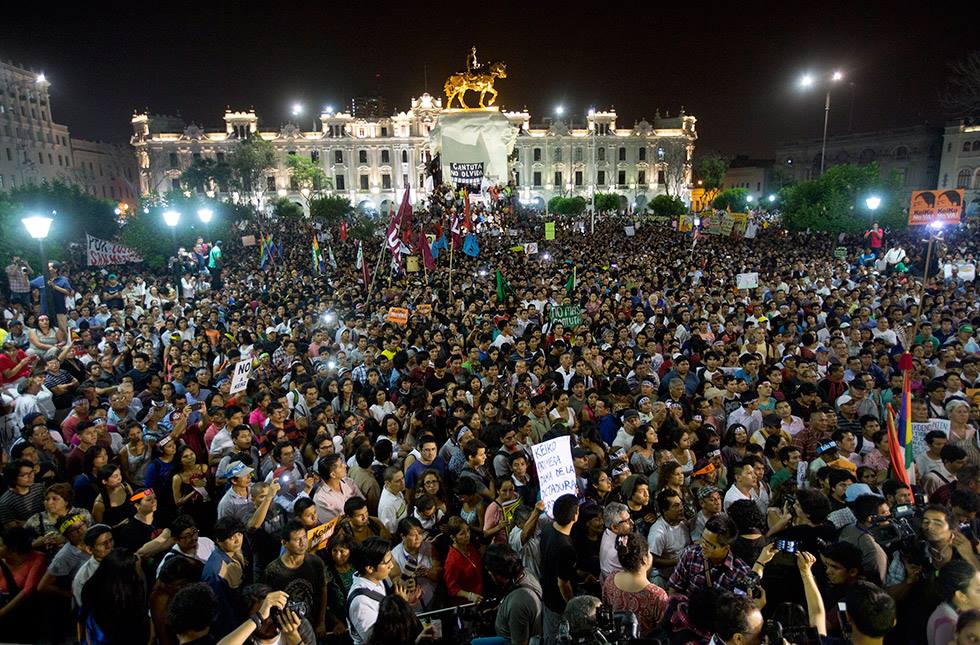 Secondly, a series of constitutional and legal modifications have been made inPeru over the last few years that have reduced guarantees for citizens and, inparticular, have created a punitive legal framework for the defence of humanrights. The types of crimes generally used against defenders have been modifiedand now have excessively broad definitions that lack the principle of legality.Another alarming aspect in the transformation of the Peruvian justice system isthe creation of a system that enables “preventive complaints” to be filed withthe Prosecutor’s Office for the Prevention of Crime. The Observatory hasdocumented the way in which this system has been used in a number of cases tointimidate people who plan to exercise their right to social protest, as theyhave been reported in advance for possible crimes that they could commit duringprotests, including extortion, kidnapping and damage to property. Althoughthese criminal proceedings do not come to fruition, they are like swords ofDamocles hanging over the heads of people who wish to exercise the right toprotest.

Thirdly, thecriminalisation of human rights defence work is particularly worrying. In Peru,this affects different kinds of defenders, including journalists, tradeunionists, defenders of victims of the internal armed conflict and communitiesdefending land and territory. Community leaders, indigenous defenders andpeasant patrols (ronderos) areparticularly affected by this criminalisation due to the use of criminaloffences against them including extortion and kidnapping. In addition, thereare concerns about the trend in using the crime of defamation against humanrights defenders.

Fourthly,the mission has been able to confirm that the role of the security forces doesnot comply with international human rights standards, particularly in themining region in the south of the country and in other conflictive areas. Themission has identified shortcomings in the structure of the security forces,their bias in favour of business groups as a result of agreements betweencompanies and the police, as well as their tendency to use excessive force tosuppress protest, as seen, for example, in regions like Espinar andChumbivilcas in the Department of Cusco, and against the small-scale farmingmovement, the women’s movement and the LGBTI movement. Finally, the fact that aState of Emergency has been called preventively is cause for alarm and was oneof the central issues addressed in meetings with the different Peruvianauthorities. The Observatory welcomes the recent decision not to expand thestate of emergency in the mining region but calls for clarification over whichauthorities were responsible for the previous declarations, and for guaranteesof non-repetition.

Finally, theObservatory expresses concern about the alarming lack of action on the part ofthe Peruvian authorities to establish guarantees for the defence of humanrights and to make progress in fighting against impunity in cases of attacksagainst human rights defenders. It is important to highlight the fact that Peruhas no state protection mechanism or public policy on human rights defenders,despite the fact that a number of States in the region are making progress inthis regard.

TheObservatory carried out an international fact-finding mission to evaluate thesituation of people and organisations that defend human rights in the Republicof Peru. The mission was held between the 4 and 9 June in the Departments ofLima and Cusco, with the support of the National Human Rights CoordinationGroup (Coordinadora Nacional de DerechosHumanos - CNDDHH) and Human Rights without Borders (Derechos Humanos Sin Fronteras - DHSF).

Thedelegation was composed of Claudia Virginia Samayoa (from Guatemala, Presidentof UDEFEGUA and member of the OMCT’s Executive Board) and Miguel MartínZumalacárregui (from Spain, Director of the OMCT’s Brussels Office and OMCT’sHuman Rights Advisor for the Observatory). The mission was also accompanied by JorgeBracamonte, Executive Secretary of the CNDDHH.

In the nextfew months the Observatory will publish a report detailing its findings andspecific recommendations on the situation of human rights defenders in Peru.

The Observatory for the Protection ofHuman Rights Defenders (the Observatory) was created in 1997 by OMCT and FIDH.The objective of this programme is to intervene to prevent or remedy situationsof repression against human rights defenders. OMCT and FIDH are both members ofProtectDefenders.eu, the European Union Human Rights Defenders Mechanismimplemented by international civil society.