English
Français
Español
EGY 011 / 1219 / OBS 112Arbitrary detention /Torture /Judicial harassmentEgyptDecember 23, 2019
The Observatory for the Protection of Human Rights Defenders, a partnership of the World Organisation Against Torture (OMCT) and FIDH, requests your urgent intervention in the following situation in Egypt.
Brief description of the situation: 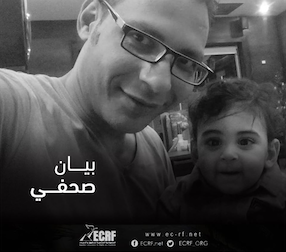 The Observatory has been informed by reliable sources about the arbitrary detention of Mr. Ahmed Abdel Fattah, a human rights defender from Aswan governorateand a board member of the Egyptian Commission for Rights and Freedoms (ECRF), a human rights law firm based in Cairo operating in several governorates. Mr. Abdel Fattah notably works for the promotion of health rights, environmental rights, refugees and migrants’ rights, Nubian rights, and the rights of persons with disabilities in Upper Egypt.
According to the information received, on December 21, 2019, the Nasr City Prosecutor ordered the detention of Mr. Ahmed Abdel Fattah for 15 days pending investigations in Case number 606 of 2019 Emergency Misdemeanors on charges of “belonging to a terrorist group” and “spreading false information undermining State security”.
Mr. Ahmed Abdel Fattah was arrested by the police on December 10, 2019 at around 1am at a checkpoint in Nasr city, in Cairo, after he refused to open his mobile phone to be searched. Mr. Abdel Fattah was then brought to Nasr City police station 2, but his place of detention was only disclosed on December 20, 2019, when he was brought to Nasr City Prosecution.
Mr. Abdel Fattah subsequently reported that at the police station he was interrogated by national security officers and tortured until he revealed his mobile phone password. When the police and national security learned that he was working with ECRF, a hooded policeman would have told him: "We thought you belong to a terrorist group, it turns out it is a human right group you belong to, that is even worse".
The evidence held in the case against him are his mobile phone and printed screenshot of his Facebook page where he shared posts from ECRF Facebook page, including about the disappearance and arbitrary detention of Mr. Ibrahim Ezz El-Din, another ECRF member who went missing for 167 days until he at last reappeared at State security prosecution on November 26, 2019[1].
At the time of publishing this Urgent Appeal, Mr. Ahmed Abdel Fattah remained detained in Nasr City police station 2.
The Observatory expresses its utmost concern over the acts of torture and arbitrary detention of Mr. Ahmed Abdel Fattah, which seem to only aim at punishing him for his legitimate human rights activities. The Observatory condemns the ongoing harassment of human rights defenders in Egypt, and recalls that Messrs. Ibrahim Ezz El-Din and Haytham Mohamadein[2], two other ECRF members, also remain arbitrarily detained.
The Observatory calls on the Egyptian authorities to guarantee in all circumstances Mr. Ahmed Abdel Fattah’sphysical integrity and psychological well-being, to release him immediately and unconditionally and to immediately and unconditionally end any acts of harassment, including at the judicial level, against him and all human rights defenders in Egypt.
Actions requested:
Please write to the authorities in Egypt, urging them to:
i. Guarantee, in all circumstances, the physical integrity and psychological well-being of Mr. Ahmed Abdel Fattahas well as of all human rights defenders in Egypt;
ii. Immediately and unconditionally release Mr. Ahmed Abdel Fattahas his detention is arbitrary since it only seems to aim at punishing him for his human rights activities;
iii. Carry out a transparent, impartial, immediate and thorough investigation into the above-mentioned allegations of torture in order to identify all those responsible, bring them before an independent tribunal, and sanction them as provided by the law;
iv. Put an end to all acts of harassment, including at the judicial level, against Mr. Ahmed Abdel Fattah, as well as against all ECRF members and all human rights defenders in Egypt and ensure that they are able to carry out their activities without hindrance;
v. Conform in all circumstances to the provisions of the Declaration on Human Rights Defenders, adopted on December 9, 1998 by the United Nations General Assembly, in particular its Articles 1 and 12.2.;
vi. Ensure in all circumstances respect for human rights and fundamental freedoms in accordance with international human rights instruments ratified by Egypt.
Addresses:Please also write to the diplomatic missions or embassies of Egypt in your respective country.
***Geneva-Paris, December 23, 2019
Kindly inform us of any action undertaken quoting the code of this appeal in your reply.
The Observatory for the Protection of Human Rights Defenders (the Observatory) was created in 1997 by the World Organisation Against Torture (OMCT) and FIDH. The objective of this programme is to intervene to prevent or remedy situations of repression against human rights defenders. OMCT and FIDH are both members of ProtectDefenders.eu, the European Union Human Rights Defenders Mechanism implemented by international civil society.[1]See Observatory Urgent Appeal EGY 002 / 0619 / OBS 050.1, published on November 27, 2019.[2]See Observatory Urgent Appeal EGY 003 / 0518 / OBS 069.3, published onDecember 12, 2019.