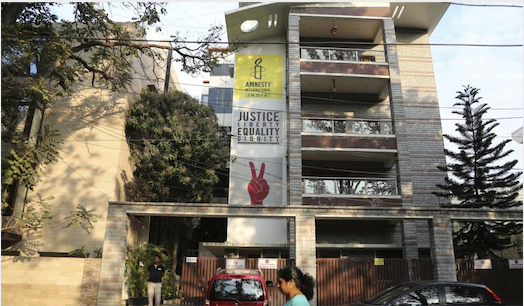 The Hindu nationalist Bharatiya Janata Party (BJP)-led government has accused Amnesty India of violating laws on foreign funding, a charge the group says is politically motivated and constitutes evidence “that the overbroad legal framework is maliciously activated when human rights defenders and groups challenge the government’s grave inactions and excesses.”

The BJP government has increasingly cracked down on civil society, harassing and bringing politically motivated cases against human rights defenders, academics, student activists, journalists, and others critical of the government under sedition, terrorism, and other repressive laws.

These actions increasingly mimic that of authoritarian regimes, which do not tolerate any criticism and shamelessly target those who dare to speak out. With growing criticism of the government’s discriminatory policies and attacks on the rule of law, the authorities seem more interested in shooting the messenger than addressing the grievances. Women’s rights activists and indigenous and minority human rights defenders have been especially vulnerable. The recent action against Amnesty India highlights the stepped-up pressure and violence felt by local defenders on the ground, regardless of their profile.

The authorities have repeatedly used foreign funding regulations under the Foreign Contribution Regulation Act (FCRA), a law broadly condemned for violating international human rights law and standards, to target outspoken groups. United Nations experts on human rights defenders, on freedom of expression, and on freedom of association have urged the government to repeal the law, saying it is “being used more and more to silence organisations involved in advocating civil, political, economic, social, environmental or cultural priorities, which may differ from those backed by the Government.”

A robust, independent, and vocal civil society is indispensable in any democracy to ensure a check on government and to hold it accountable, pushing it to do better. Instead of treating human rights groups as its enemies, the government should work with them to protect the rights of all people and ensure accountability at all levels of government.
For more information, please contact:
For Front Line Defenders, in Dublin, Adam Shapiro (English): +1-202-294-8813; or adam@frontlinedefenders.org
For CIVICUS: World Alliance for Citizen Participation, in Johannesburg, David Kode (English): +27-73-775-8649; or david.kode@civicus.org. Twitter: @CIVICUSalliance
For FIDH, in Paris, Eva Canan (English, French): +33-6-48-05-91-57 (mobile); or ecanan@fidh.org. Twitter: @fidh_en
For International Commission of Jurists, in Geneva, Ian Seiderman: ian.seiderman@icj.org
For OMCT, in Geneva, Iolanda Jaquemet (English, French): +41-79-539-41-06; or ij@omct.org. Twitter: @omctorg
For FORUM-ASIA, South Asia Programme, in Bangkok, Melissa Ananthraj (English): sasia@forum-asia.org
For Human Rights Watch, in London, Meenakshi Ganguly (English, Bengali, Hindi): +91-9820-036032; or gangulm@hrw.org. Twitter: @mg2411
For South Asians for Human Rights, in Colombo, Nushka Nafeel (English): +94-11-2695910; or communications@southasianrights.org
For Foundation the London Story, in The Netherlands, Ritumbra Manuvie: +31-68-286-5225; or Manuvie@Thelondonstory.org
For Hindus for Human Rights, in New York, Sunita Vishwanathan: +1-917-518-2441; or Sunita@hindusforhumanrights.org
For Global Indian Progressive Alliance, in the United States, Manish Madan: +1-609-878-0508; or info@gipausa.org. Twitter: @GIPAlliance