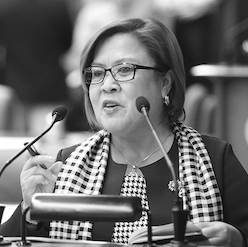 Paris-Geneva, May 6, 2020 - The President of the Philippine Senate, which resumed its regular session on May 4, refused to allow currently imprisoned human rights lawyer and Senator Leila de Lima to participate in Senate sessions via teleconference. The Observatory for the Protection of Human Rights Defenders (FIDH-OMCT) denounces this decision, which aims at preventing her from exercising her duties as a Senator.
“The decision to prevent Senator de Lima from exercising her mandate reflects a clear attempt to restrict her right to freedom of expression and to silence the voice of a lawmaker involved in the defense of human rights in the Philippines,” said FIDH President Alice Mogwe.
On May 4, the Senate adopted Resolution No. 373, seeking to amend the Rules of the Senate to allow participation in plenary sessions and committee hearings via teleconference. The Resolution was introduced by 16 members of the Senate on April 27, 2020, because of the ongoing lockdown of Manila, which has been extended at least until May 15, 2020.
On the same day of the filing of the Resolution, when asked if imprisoned Senator Leila de Lima would be allowed to participate in these sessions via teleconference, Senate President Vicente Sotto III answered that shewould not be allowed to join. Mr. Sotto justified the refusal by saying that the Senate “would have no jurisdiction” over Senator de Lima, and that “only the courts and the Philippine National Police would have jurisdiction over her”.
In a handwritten note to Mr. Sotto, Ms. de Lima invoked the Trillanes v. Pimentel Supreme Court ruling as the legal basis to be allowed to attend the sessions via teleconference without the need to leave the detention center. Ms. de Lima said the jurisdiction of the courts was not affected by her participation in Senate hearings “via electronic means”.
“The Observatory urges the Philippine Senate to overturn its decision to disallow Senator de Lima from participating remotely in Senate proceedings - a decision that has no legal basis and represents the latest act of persecution against her,” concluded OMCT Secretary General Gerald Staberock.
Senator de Lima has been a staunch critic of President Duterte’s approach to combating crimes and drug trafficking. In 2009, as Chair of the Philippine Commission on Human Rights (CHR), she initiated a probe into Duterte’s involvement in the ‘Davao Death Squad’ during his time as mayor of Davao City. In August 2016, as Chair of the Senate Committee on Justice and Human Rights, de Lima convened hearings on the hundreds of killings that had been carried out as part of President Duterte’s ‘war on drugs’. Over the past years, she has also advocated for the adoption of a Human Rights Defenders Protection Bill, which is still pending at the Senate level. Prior to her imprisonment, President Duterte had pledged to “destroy her in public”.
Ms. de Lima handed herself in to police on February 24, 2017, a week after the Department of Justice filed three charges against her under the Comprehensive Dangerous Drugs Act, and a day after a Manila court issued a warrant for her arrest. The charges were related to Ms. de Lima’s alleged involvement in a drug trafficking ring inside the New Bilibid Prison in Metro Manila’s Muntinlupa City, while she was Department of Justice Secretary. If convicted, Ms. de Lima could face between 12 years and life in prison. Ms. de Lima has been in pre-trial detention at the Philippine National Police Custodial Center at Manila’s Camp Crame since her arrest.
For further information, please contact:
· FIDH: Mr. Samuel Hanryon (English, French), +33 6 72 28 42 94 (Paris)
· OMCT: Ms. Iolanda Jaquemet (English, French), +41 79 539 41 06 (Geneva)
The Observatory for the Protection of Human Rights Defenders (the Observatory) was created in 1997 by FIDH and the World Organisation Against Torture (OMCT). The objective of this programme is to intervene to prevent or remedy situations of repression against human rights defenders. FIDH and OMCT are both members of ProtectDefenders.eu , the European Union Human Rights Defenders Mechanism implemented by international civil society.