The Observatory for the Protection of Human Rights Defenders, a partnership ofFIDH and the World Organisation Against Torture (OMCT), requests your urgentintervention in the following situation in Italy.

The Observatory has been informed by reliable sources about thearbitrary arrest and judicial harassment of Ms. Carola Rackete, thecaptain of the flying Dutch flag ship Sea-Watch 3, a Search and Rescue(SAR) vessel from the German NGO Sea-Watch. A German specialist inenvironmental and nautical sciences, Ms. Carola Rackete has been dedicatingherself entirely to humanitarian rescue in the Mediterranean Sea since 2016. 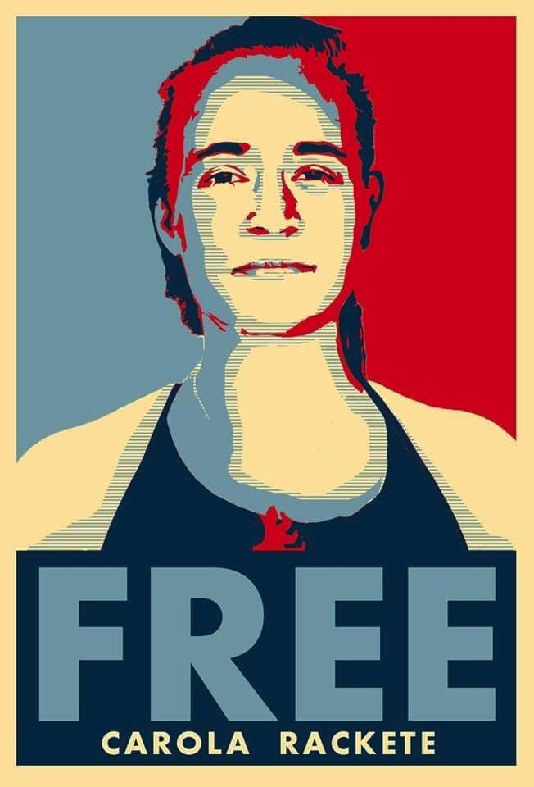 According to the information received, in the night of June 28 to June29, 2019, Ms. Carola Rackete forced the Italian cost guards block and dockedthe Sea-Watch 3 - with 42 migrants on board - in Lampedusa’s port. Shewas subsequently arrested, at 3 a.m. on June 29, for “resistance or violencetowards a warship” (Article 1100 of the Italian Navigation Code, hereinaftercod. nav. - a crime for which she could face up to ten years in prison) and“violence against public officials” (Article 337 of the Italian Penal Code,hereinafter c.p.) by around 20 police officers, and put under house arrest inLampedusa. Ms. Carola Rackete was subsequently presented to the investigatingjudge (GIP) in Agrigento (Sicily) on July 1, 2019.

On July 2, 2019, after four days of house arrest, the investigatingjudge decided to lift the house arrest and release Ms. Carola Rackete pendinginvestigation, despite the Prosecutor’s request to confirm the house arrest anda ban on residence in the province. In its decision, the investigating judgerecognised that Ms. Carola Rackete’s decision to dock the Sea-Watch 3 inItaly was in line with international law and international conventions signedand ratified by Italy, namely with Article 98 of the 1982 United NationsConvention on the Law of the Sea (UNCLOS), ratified by and entered into forcein Italy via Law No. 689/1994, which provides that the master of a ship mustrender assistance to any person in distress at sea and proceed to their rescue,as well as with the 1974 Safety of Life at Sea (SOLAS) and 1979 SAR (MaritimeSearch and Rescue) Conventions, both ratified by and entered into force inItaly respectively via Law No. 313/1980 and Law No. 47/1989, which also containthis obligation[1].In its warrant, the investigating judge referred also to Article 18 and 19 ofUNCLOS, which provide that the passage of a ship through the territorial sea,including stopping and anchoring, for the purpose of rendering assistance topersons in danger or distress must be considered “innocent”[2].She concluded that the allegation of the commission of the offence provided forunder Article 1100 of the Navigation Code is unfounded and that Ms. Rackete’salleged responsibility for the offence provided for under Article 337 of the PenalCode is lifted by the exonerating circumstance provided for under Article 51 ofthe Penal Code, which absolves anyone who commits a crime to fulfil a legalobligation.

Despite the decision of the investigative judge, that refused toconvalidate the arrest, thus releasing Ms. Rackete, and rejected the request toapply precautionary measures, the charges initially brought against her by thepublic prosecutor are still pending, and Ms. Carola Rackete will be heard bythe public prosecutor on July 9, 2019. In the evening of July 2, 2019, theSicily’s prefecture announced that a deportation order against Ms. CarolaRackete had been prepared and signed but that it would not be implementedbefore this next hearing. This order will have to be confirmed by judicialauthorities.

Sea-Watch could also face the seizure of the vessel and a 50,000 Eurosfine, according to recently adopted Legislative Decree No. 53/2019, whichmodifies Leg. Decree N° 286/1998, tightening up the sanctions for offencesrelated to irregular immigration[3].

The Observatory expresses its utmost concerns about the increasingharassment and criminalisation against human rights defenders working onmigration issues in Europe[4].As of July 2019, at least 35 SAR workers were being officially investigated bythe Italian authorities under charges of “aiding illegal immigration”. Thetrend of criminalising migrant rights defenders has also been documented inother EU countries, such as France and Greece.

The Observatory further recalls that rescue of people in distress at seais an obligation under international law, as enshrined in e.g. Article 98UNCLOS and in the SOLAS and SAR Conventions, and under customary law[5].At the EU level, Directive 2002/90/EC (“the Facilitation Directive”) allowsmember states to exempt from sanctions those who enable a migrant toirregularly enter, transit or stay in the territory of a member states wherethe aim is to provide humanitarian assistance (Article 1 (2))[6]. The failure to respect the duty to rescueconstitutes a criminal offence in several EU member states[7].The Observatory deplores that in the current context, Italy and other EU memberstates are acting in blatant violation of their domestic and internationalobligations and that vessels have been increasingly deterred from conductingSAR operations in the Mediterranean, to the point where such operations havevirtually stopped.

On June 18, 2019, the Council of Europe Commissioner for Human Rightsreleased a recommendation[8] tomember states encouraging them to reframetheir response to migration and SAR activities according to human rightsstandards. On March 1, 2018, the UnitedNations Special Rapporteur on the situation of human rights defenders alsopublished a report underlining that “defenders of people on the move arecurrently facing unprecedented threats and restrictions to their work, as wellas pervasive disqualification and criminalisation” and urging States and otherstakeholders to protect their work[9].

The Observatory calls on the Italian authoritiesto ensure that all human rights defenders are allowed to carry out theirlegitimate human rights activities, in particular with regard to SAR operationsin the Mediterranean Sea, without hindrance, and on the judiciary to immediatelydrop all charges against Ms Carola Rackete.

On June 25, 2019, the application filed by the NGO Sea-Watch to theEuropean Court of Human Rights (ECtHR) in order to obtain an interim measureunder Article 39 of the Rules of the Court requiring that the applicants beauthorised to disembark in Italy was rejected, on ground that most of the vulnerable people onboard – 11 persons out of the 53 migrants initially present on board the ship -had already been disembarked on health grounds on June 15 and June 21-22. Inspite of the applicants’ claim that the rights of the rescued people on boardunder the Convention[10]had been violated and their request to be permitted to disembark in order forthem to be able to apply for international protection or, at least, to be takento a safe place, the Court dismissed the request, considering that there wereno exceptionally serious and urgent reasons justifying the application of theurgent measures.

Despite the Italian authorities’ prohibition to disembark and the ECtHR’srefusal to order an interim measure, on June 26, 2019, the Sea-Watch 3entered the Italian territorial waters with 42 of the 53 migrants[11]its crew rescued in international waters within the Libyan SAR Zone on June 12,2019 and who had been on board the ship for 14 days,waiting in international waters for an authorisation from Italy or anotherEuropean Union (EU) member state to disembark.

On June 28, 2019, the prosecutor's office of Agrigento, Sicily opened aninvestigation against Ms. Carola Rackete for “aiding illegal immigration”(Article 12.1 and 3 (a) of the Consolidated Act on Immigration), a crime forwhich, following recent amendments introduced by Legislative Decree No. 53/2019entered into force on June 14, 2019, which modified the Consolidated Act onImmigration No. 286/1998 (Testo Unico sull’Immigrazione - T.U.I.), she couldface up to 15 years in prison, and “refusal to obey to a warship” (Article 1099of the Italian cod. nav.), as well as for non-compliance with the prohibitionto enter, transit or stop in Italian territorial waters ordered by anInterministerial Decree issued by the Minister of Interior, in concert with theMinister of Defence and the Minister of Infrastructures and Transports on June15, 2019 and based on Article 1 of the aforementioned decree, and ordered thesearch and seizure of the ship.

On June 29, 2019 the Sea Watch-3 entered the port of Lampedusa anddisembarked, despite the Italian authorities’ attempts to prevent the disembarkation.Ms. Carola Rackete was subsequently arrested and the prosecutor requested as aprecautionary measure the prohibition for her to reside in the Agrigentoprovince.

i. End all acts of harassmentagainst Ms. Carola Rackete and all human rights defenders in Italy, includingthose protecting and promoting the human rights of and providing humanitarianassistance to migrants, asylum-seekers and refugees, including through SARactivities;

ii. Ensure in allcircumstances that human rights defenders and NGOs are able to carry out theirlegitimate activities, including SAR activities in the Mediterranean Sea,without any hindrance and fear of criminalisation or reprisals;

iii. In line withinternational human rights standards, broaden the scope of the exemptionprovided for under Article 12 of Italian LegislativeDecree No. 286 of 1998 which, as currently drafted, is limited to SARactivities concerning migrants “already present on the territory of the State”;

iv. Launch an investigationinto Italy's Legislative Decree n° 53/2019, which modifies the Consolidated Acton Immigration (D. lgs. 286/1998), to assess its compliance with EU andinternational standards, and take appropriate measures to address any inconsistencythat may be identified;

v. Amend Article 1(2) ofEU Directive 2002/90/EC defining the facilitation of unauthorised entry,transit and residence (“the Facilitation Directive”) to impose a clearobligation on Member States not to impose sanctions in cases where the aim ofthe behaviour is to provide humanitarian assistance to the person concerned andensure that his/her the human rights are respected[12];

vi. Conform to theprovisions of the UN Declaration on Human Rights Defenders, adopted by theGeneral Assembly of the United Nations on December 9, 1998, especially itsArticles 1 and 12.2;

Addresses in the European Union:

Pleasealso write to the diplomatic representations of Italy and the European Union inyour respective countries.

The Observatory for theProtection of Human Rights Defenders (the Observatory) was created in 1997 by FIDH andthe World Organisation Against Torture (OMCT). The objective of thisprogramme is to prevent or remedy situations of repression against human rightsdefenders. FIDH and OMCT are both members of ProtectDefenders.eu, the European Union Human Rights Defenders Mechanism implemented byinternational civil society.

[1] The aforementioned international obligations arereinforced under domestic law by the provisions under Article 1158 of theItalian Navigation Code, which criminalises the omission by the master of aship to provide the said assistance to or rescue people in distress at sea incases where he/she is under a legal obligation to do so.

[2] In addition, Article 10-ter of the Italian LegislativeDecree 286/1998 provides that a foreigner found while irregularly crossing theState’s land or sea borders or arrived on the State’s territory following searescue operations must be conducted to designated hotspot areas for firstassistance and informed of the procedures to seek international protection,relocation to other EU member states or assisted voluntary return. From thisprovision stems the obligation for State authorities to rescue and providefirst assistance to anyone who has entered, albeit irregularly, the State’sterritory.

[3] Legislative Decree No.53/2019 (also known as Matteo Salvini’s second “Security Decree”) whichmodifies the Consolidated Act on Immigration (Testo Unico sull’Immigrazione –T.U.I., D. lgs. 286/1998) and which entered intoforce on June 14,2019, provides for fines of 10,000 up to 50,000 Euros for NGOsthat try to disembark in Italy after rescuing migrants, as well as the seizureof the NGO migrant rescue ships if they are repeated offenders or if themigrants who disembark are more than 100. In May 2019, United Nations humanrights experts wrote to Italy saying the draft decree was an attempt tocriminalise SAR operations carried out by humanitarian actors.