The Observatory for the Protection of Human Rights Defenders, a partnership ofthe World Organisation Against Torture (OMCT) and FIDH, has received newinformation and requests your urgent intervention in the following situation inAzerbaijan.

TheObservatory has been informed by reliable sources about a decision issuedyesterday by the Appeals Court of Baku, Azerbaijan, ordering Ms. Leyla Yunus, Director of the Institutefor Peace and Democracy (IPD) and a member of OMCT General Assembly, and herhusband Mr. Arif Yunusov, Head ofIPD Conflictology Department, to be forcibly returned to Azerbaijan from theNetherlands in order to participate in new hearings in their case. 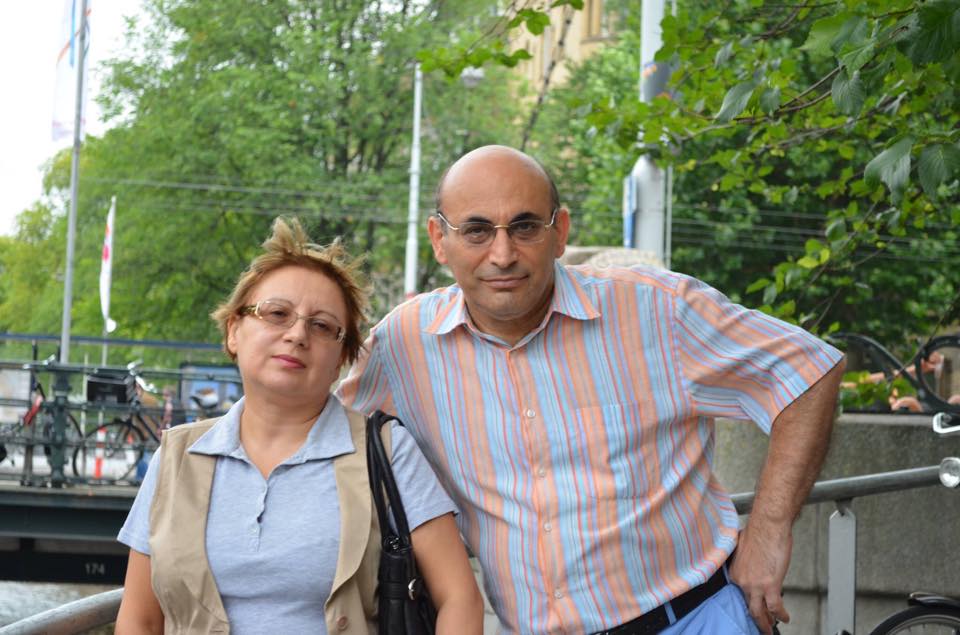 According tothe information received, on May 17, 2017, the Baku Court of Appeals rejected amotion filed by the lawyer of Ms. Leyla Yunus and Mr. Arif Yunusov to allowthem to take part in hearings via videoconference. The court also ruled thatthe next hearing will be held on May 31, and requested Ms. Yunus and Mr.Yunusov to be sent back to the country by force. This may lead to aninternational arrest warrant to be issued by the Azeri authorities. These newhearings in the case stem from an appeal lodged by the Yunuses in order to seekfull exoneration in relation to their conviction on trumped-up charges of fraudand tax evasion in 2015 (see background information).

The Observatoryrecalls that Ms. Leyla Yunus and Mr. Arif Yunusov were arbitrarily detained fornearly one year and a half. On August 13, 2015, after a year in pre-trialdetention, they were sentenced to 8,5 and 7 years of imprisonment respectivelyon following a trial that grossly disregarded international standards of fairtrial and due process. On December 9,2015, their sentence was suspended and commuted to a release on probation forfive years. After the Baku Court of Appeals denied the Yunus couple permissionto temporarily leave the country in order to receive urgent medical treatmenton February 11 and March 11, 2016, they were finally allowed to travel to TheNetherlands on April 19, 2016, where they have stayed since.

TheObservatory strongly deplores the May-17 decision of the Baku Court of Appeals,which puts Ms. Leyla Yunus and Mr. Arif Yunusov’s physical integrity at seriousrisk as there are strong reasons to believe that they would be arbitrarilyre-arrested upon arrival in Azerbaijan.

The Observatory recalls that Mr. Arif Yunusovsuffers from hypertension, and Ms. Leyla Yunus from hepatitis, diabetes,pancreatitis and gallstone disease, which were aggravated after her arrest, andduring their detention in Azerbaijan. Both are still in need of medical care.

TheObservatory calls on the Azeri authorities to immediately and unconditionallyput an end to all forms or attempts of judicial harassment against Ms. LeylaYunus and Mr. Arif Yunusov, and calls on the authorities of the Netherlands toensure their physical integrity and their personal freedoms by refusing anycooperation with a judicial system that grossly disregards internationalstandards and that sentenced the couple to arbitrary and heavy prison termsunder trumped-up charges as a means to sanction their legitimate human rightsactivities.

Ms. Leyla Yunus has long fought for human rights and the rights of ethnicminorities in her country. She has been heading the IPD since 1995. In October2014, Ms. Leyla Yunus was awarded the Polish Prize of Sérgio Vieira de Mello,and was among the three finalists for the Sakharov Prize. She also received thedistinction of “Chevalier de l’Ordre National de la Légion d’Honneur” of theFrench Republic in 2013. She has worked on numerous projects relating to humanrights, political prisoners, corruption, human trafficking, gender-based issuesand violations of the right to property. With her husband, Ms. Yunus has alsoworked towards reconciliation between Azerbaijan and Armenia, two countriesdivided by the conflict in the Nagorno-Karabakh region.

On July 30,2014, Ms. Yunus was arrested by the Prosecutor’s office on charges of “treason”(Article 274 of the Criminal Code), “large-scale fraud” (Article 178.3.2),“forgery” (Article 320), “tax evasion” (Article 213), and “illegal business”(Article 192), and brought to the department of grave crimes of the GeneralProsecutor’s Office, where she underwent a six-hour questioning. Her husbandjoined her at the department of grave crimes of the General Prosecutor’sOffice, where he was also questioned. Ms. Yunus and Mr. Yunusov were bothformally charged, and placed in pre-trial detention. Mr. Yunusov was laterplaced under house arrest, and placed in detention again on August 5, forviolation of his conditional sentence.

On January 5, 2015 and February 2, 2015, the European Court of Human Rightscommunicated on two applications filed for violations of the rights of Ms.Leyla Yunus and Mr. Arif Yunusov.

On July 15, 2015, the trial opened in the Baku Grave Crimes Court. Duringtrial, Ms. Yunus and Mr. Yunusov were placed in a glass courtroom cage, withtheir Azeri to Russian interpreter sitting near the cage (both areRussian-speaking, and the hearings were held in Azeri). Local and internationalobservers were often denied access to the courtroom without explanation andhearings were held in the smallest room of the courthouse.

During the trial, the lawyers of Ms. Yunus regularly argued that continueddetention was life threatening to Ms. Yunus, highlighting that Ms. Yunus wassuffering from diabetes, hepatitis C, and a liver enlargement anddeterioration. The lawyer also denounced the poor conditions of detention ofhis client at the Investigative prison of the Ministry of National Security, whereMr. Arif Yunusov suffers from insomnia high blood pressure. Throughout thetrial, all motions filed by the defence lawyers, including the request to sitnext to their clients, were dismissed.

At the hearing of August 3, 2015, an ambulance was called in order to providefirst aid healthcare to Mr. Yunusov, who fainted due to a worryingly higharterial pressure. Mr. Yunus later regained consciousness but the doctor of theNational Security prison who was called to the court after the health incident,reportedly stated that Mr. Yunusov health condition did not allow him tofurther participate in the trial. However, the judge decided to adjourn thehearing to the next day, August 4, 2015.

On August 13, Ms. Yunus and Mr. Yunusov were convicted to 8.5 and 7 years injail respectively. Mr. Arif Yunusov fainted while making his final plea.

On October 12, 2015, the appeal trial of Ms. Leyla and Mr. Arif Yunusov openedbefore the Baku Court of Appeal. The hearing was suspended several times.International observers present reported that Ms. Yunus looked very weakand denounced being refused the medical treatment prescribed by the Germandoctor.

On October 20, 2015, the Baku Court of Appeal decided to refer the criminalcase against Leyla Yunus and Arif Yunusov back to the Baku Grave Crimes Court,following a complaint filed by their lawyer, highlighting inaccuracies in theminutes of the hearings of the trial before the lower court. On November 5,2015, the court considered this motion, but did not provide its conclusions tothe defence attorneys during the preliminary hearing held before the Baku Courtof Appeal.

During the hearing on November 5, all the motions filed by their lawyers weredismissed by the Presiding Judge Vugar Mammadov, including the motion to changethe measure of restraint from detention to house arrest considering inparticular their health condition and to partial re-examination of the case.Ms. Leyla Yunus and Mr. Arif Yunusov's lawyer was not allowed to meet anddiscuss with his clients before, during and after the hearing. During thehearing, several large bruises were visible on the neck of Leyla Yunus. BothArif and Leyla Yunus looked visibly exhausted and weak. Mr. Arif Yunus wasreportedly brought to the courtroom from the hospital. Ms. Leyla Yunus and Mr.Arif Yunusov's lawyer announced that he would file a complaint regardingpotential acts of ill-treatment. Placed in a glass cage before the observerswere allowed to the courtroom, the two stayed silent during the whole hearing.

On November12, 2015, the Baku Grave Crimes Court approved the request to change themeasure of restraint against Mr. Arif Yunusov from detention to conditionalrelease, for the period of appeal. Under the terms of the decision, Mr. Yunusovcannot leave Baku. The decision was based on a medical reference provided bythe Head of the Department of Penitentiary Service of the Ministry of Justice,stressing that the critical health situation of Mr. Yunusov had required histransfer from the Isolator of the Ministry of National Security to the MedicalEstablishment of the Ministry of Justice. The reference indicated that whiletransfer had allowed his situation to be normalised temporarily, it remainedproblematic to ensure stable blood pressure under the conditions ofimprisonment. The document reportedly also referred to the medical inspectionof German doctor Christian Witt, which had confirmed the deterioration of hishealth. The Baku Grave Crimes Court could review its decision in case of apositive change in the health of Mr. Yunusov.

During the November-12 hearing, the lawyers of the defendants indeed also askedthe court to consider a similar measure for Ms. Leyla Yunus given her criticalhealth condition, but the court did not even allow them to finalise theirrequest and interrupted them on the grounds that the above mentioned medicalreference referred only to Mr. Arif Yunusov. Speaking from the glass courtroomcage, Mr. Yunusov demanded the release of his wife based on her critical healthcondition.

OnDecember 9, 2015, Ms. Leyla Yunus was released after the BakuCourt of Appeal commuted the sentences against her and her husband to a releaseon probation for five years.

On February 11, 2016, the Yasamal District Court of Bakudenied them permission to temporarily leave the country. The decision wasappealed by the Yunuses but on March 11, 2016, the Court of Appeals in Bakuruled that Ms. Leyla Yunus and Mr. Arif Yunus could not travel to Germany toreceive urgent medical treatment due to their suspended prison terms.

Please write to the authorities in Azerbaijan, urging them to:

i. Put an end to any kind of harassment- including at the judicial level - against Ms. Leyla Yunus, Mr. Arif Yunusov,and more generally all human rights defenders in Azerbaijan.

iii. Conform with the provisions of theUN Declaration on Human Rights Defenders, adopted by the General Assembly ofthe United Nations on December 9, 1998, especially its Articles 1, 5, and 12.2.

iv. Ensure in all circumstances respectfor human rights and fundamental freedoms in accordance with internationalhuman rights standards and international instruments ratified by Azerbaijan.

Please write to the authorities in the Netherlands, urging them to:

i. Guarantee in all circumstances thephysical and psychological integrity of Ms. Leyla Yunus, Mr. Arif Yunusov byrefusing to cooperate in their forcible return to Azerbaijan for a judicialprocess that has so far disregarded all international standards.

ii. Guarantee the freedom of movement ofMs. Leyla Yunus and Mr. Arif Yunusov by taking all actions at their disposalincluding diplomatic actions with third countries to ensure that they are notsubjected to an international arrest warrant nor included in the Interpol list.

· Mr.Ilham Aliyev, President of the Republic of Azerbaijan, E-mail: office@pa.gov.az,office@apparat.gov.az

Authorities from the Netherlands:

TheObservatory for the Protection of Human Rights Defenders (the Observatory) wascreated in 1997 by the World Organisation Against Torture (OMCT) and FIDH. Theobjective of this programme is to prevent or remedy situations of repressionagainst human rights defenders. OMCT and FIDH are both members of ProtectDefenders.eu, the European Union HumanRights Defenders Mechanism implemented by international civil society.