TheObservatory for the Protection of Human Rights Defenders, a partnership of theWorld Organisation Against Torture (OMCT) and FIDH, has received newinformation and requests your urgent intervention in thefollowing situation in Thailand.


The Observatory has been informed by reliable sourcesabout charges of sedition and violating the ban on political gatherings againstMs. Sirikan “June” Charoensiri, ahuman rights lawyer with the organisation Thai Lawyers for Human Rights (TLHR)[1], in connection with her workrepresenting 14 student activists from the Neo Democracy Movement (NDM). 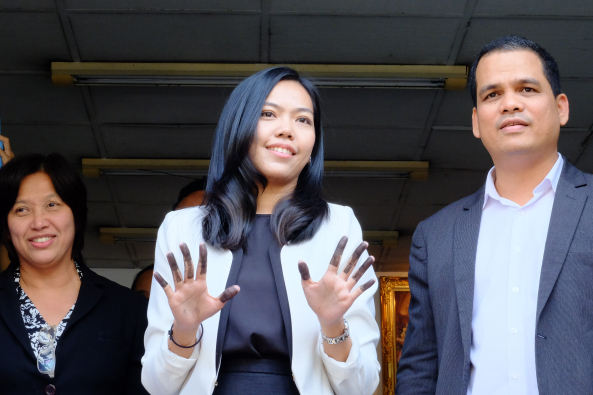 According tothe information received, on October 22, 2016, Ms. Sirikan was charged withsedition (Article 116 of the Criminal Code) and violating the ban on politicalgatherings of five of more people (Article 12 of the Head of National Councilfor Peace and Order (NCPO) Order 3/2015) at Bangkok’s Samranrat Police Station.The charges alleged Ms. Sirikan was an accomplice in anti-NCPO demonstrationsorganized by NDM student activists on June 25-26, 2015. (See Backgroundinformation).

If indicted,Ms. Sirikan will be tried in a military court because the alleged acts withwhich she has been charged were committed prior to the enforcement of the Headof NCPO Order 55/2016. This order, issued on 12 September 2016, ends thepractice of military trials of civilians for certain crimes committed afterthat date. If convicted, Ms. Sirikan faces up to seven years in prison.

Her firsthearing has not yet been scheduled. Ms.Sirikan faces two additional charges under the Criminal Code in connection withevents that followed the arrest of the 14 NDM students on June 26, 2016. (SeeBackground information).

TheObservatory strongly condemns the ongoing judicial harassment against Ms.Sirikan, which aims to hinder her legitimate work as a human rights lawyer, andcalls on the Thai authorities to immediately drop all charges against her.

Untilall charges are dropped against Ms. Sirikan, the Observatory further urges theThai authorities to ensure that all judicial proceedings against her arecarried out in full compliance with her right to a fair trial, as providedunder international law.

On June 26,2015, police arrested 14 student activists of the Neo Democracy Movement (NDM)[2]pursuant to an arrest warrant issued by the Bangkok Military Court. All werecharged with violating the Head of National Council for Peace and Order (NCPO)Order 3/2015, which bans political gatherings of five or more people, andArticle 116 of the Criminal Code (“sedition”). Ms. Sirikan, together with sevenother TLHR lawyers, assisted the 14 student activists at the Bangkok MilitaryCourt.

On the nightof June 26-27, 2015, after Ms. Sirikan had finished providing legal assistanceto the 14 activists, more than 10 police officers who were at the BangkokMilitary Court, including Pol. Maj. Gen. Chayapol Chatchaidej, commander of theSixth Division of Metropolitan Police Bureau, requested access to Ms. Sirikan’scar in order to search for the student activists’ mobile phones. Following Ms.Sirikan’s refusal due to the lack of a court warrant and relying on the specialprotection of lawyers and lawyer-client confidentiality, the police officersimpounded Ms. Sirikan’s car overnight.

At 12:45pmon June 27, Ms. Sirikan filed a complaint against Pol. Maj. Gen. ChayapolChatchaidej and others for “malfeasance” (Article 157 of the Criminal Code) forillegally impounding her car. While Ms. Sirikan was in the process of filingthe complaint, a police team arrived at the site of her seized car at 3:30pmwith a search warrant. Officials from the Office of Police Forensic Scienceaccompanied the police to conduct the search.

Uponpresentation of the search warrant, Ms. Sirikan agreed to open her car. Theitems found in the car included TLHR’s case files, the personal computers ofthe seven TLHR lawyers, and the personal belongings of the student activistsincluding mobile phones. Five mobile phones belonging to the students wereconfiscated and placed in a sealed envelope, which was turned over to theOffice of Police Forensic Science.

Ms. Sirikansubsequently returned to the Chanasongkram Police Station in Bangkok to file asecond complaint against Pol. Maj. Gen. Chayapol Chatchaidej and hissubordinates for “malfeasance”, despite being threatened that the police wouldfile a counter suit against her.

On June 28,2015, Metropolitan Police Commissioner Pol. Lt. Gen. Srivara Rangsipramkul toldreporters that the police had recovered important evidence from Ms. Sirikan’scar and that they were considering whether to press charges against her.

On June 29,2015, police visited the house of Ms. Sirikan’s parents in her hometown andasked her mother to identify Ms. Sirikan in various photos and asked her aboutMs. Sirikan’s background.

On July 7,2015, the Bangkok Military Court ordered the release of the 14 studentactivists. However, the charges against them remain pending.

On February2, 2016, Ms. Sirikan received a police summons to report to Bangkok’sChanasongkram Police Station on February 9, 2016, to hear the criminal chargesfiled against her under Articles 172 (“filing a false police report”) and 368(“failure to comply with official orders”) of the Criminal Code as a result ofthe complaints filed by Ms. Sirikan against the police officers for“malfeasance” in June 2015.

On February9, 2016, Ms. Sirikan went to the Chanasongkram Police Station in Bangkok andwas formally charged with “failure to comply with official orders” (Article 368of the Criminal Code) and “concealing evidence” (Article 142 of the CriminalCode).

On April 27, 2016, Ms. Sirikan was summoned to appear before the PublicProsecutor at the Subdistrict 3 Court in Dusit, Bangkok, at 10am on May 12,2016. On that occasion, Ms. Sirikan submitted a petition letter to the PublicProsecutor describing the circumstances of the events of the night of June26-27, 2015, as well as requesting the prosecutor to hear the accounts of morewitnesses, including members of the NDM, herself, Ms. Yaowalak Anuphan (theHead of TLHR), and the inquiry official who had received the complaint for“malfeasance”. The prosecutor announced he would continue with theinvestigation and adjourned the hearing to July 27, 2016.


On July 27,2016, at 9:30am, Ms. Sirikan reported to the Office of the Prosecutor of DusitDistrict in Bangkok to hear if the prosecutor had decided to prosecute her oncharges of “concealing evidence” (Article 142 of the Criminal Code)[3]and “failure to comply with an official order” (Article 368 of the CriminalCode)[4].The Prosecutor decided to postpone the hearing to September 29, 2016, due toongoing investigations. If found guilty of all charges, Ms. Sirikan could faceup to three years in prison and/or a fine of up to 6,000 baht (approximately156 Euros).

On 27September 2016, Ms. Sirikan received a new summons from the Thai policefollowing accusations that she violated Article 12 of the Head of NCPO Order3/2015, which bans political gatherings of five or more people, and Article 116of the Criminal Code (“sedition”)[5].According to the summons, the accusations were made by an army officer, Lt.Col. Pongsarit Pawangkanan.

Ms. Sirikanreceived the summons, dated 20 September 2016, when she returned to Thailandafter attending the 33rd Session of the UN Human Rights Council in Geneva whereshe was conducting advocacy on the human rights situation in Thailand. Ms.Sirikan did not receive the earlier summons, dated 14 September 2016, thatpolice claimed had been sent to her apartment, as she was not home at the time.

Please write to the authorities of Thailand asking them to:

i. Immediately and unconditionally drop all charges against Ms. Sirikan and putan end to all acts of judicial harassment against her as well as against allhuman rights defenders in Thailand;

ii.Guarantee in all circumstances the physical and psychological integrity of Ms.Sirikan and all human rights defenders in Thailand;

iii. Complywith the national and international legislation safeguarding the independenceof lawyers and protecting them from unlawful interference in their professionalactivities;

iv. Conform to the provisions of the UN Declaration on Human Rights Defenders,adopted by the General Assembly of the United Nations on December 9, 1998,especially its Articles 1 and 12.2;

Please also write to the diplomatic mission or embassyof Thailand in your respective country.

The Observatory was created in 1997 by OMCT and FIDH. The objectiveof this programme is to intervene to prevent or remedy situations ofrepression against human rights defenders. FIDH and OMCT are both members of ProtectDefenders.eu, theEuropean Union Human Rights Defenders Mechanism implementedby international civil society.

[1] TLHR is an organisation that wasset up after the 2014 coup to provide legal aid to civilians arrested and/orprosecuted by military, and monitor and document the post-coup human rightssituation, including human rights violations throughout Thailand.

[3] Article 142 states: “Whoever, damaging, destroying, concealing, making away with, losing orrendering useless any property or document seized or being kept by an official,or ordered to be sent as evidence or for execution of the law, whether theofficial keeps such property or document himself, or ordering such person orthe other person to send or keep it, shall be punished with imprisonment notexceeding three years or fine not exceeding six thousand baht, or both.”

[4] Article 368 states: “Whoever, being informedof an order of an official given according to the power invested by law,refuses to comply with the same without any reasonable cause or excuse, shallbe punished with imprisonment not exceeding ten days or fined not exceedingfive hundred baht, or both. If such order is an order authorized by law requiringa person to assist in carrying on the activities in the function of anofficial, the offender shall be punished with imprisonment not exceeding onemonth or fined not exceeding one thousand baht, or both.”