We, the undersigned human rights and other civil societyorganisations, condemn in the strongest terms the politically-motivated chargingof six human rights defenders from a Cambodian human rights group, the country’sNational Election Committee (NEC) and the United Nation’s Office of the HighCommissioner for Human Rights (UNOHCHR). The targeting of these individuals,five of whom were sent to pre-trial detention today, is the latest escalationin a far-reaching government assault on civil society ahead of upcoming localand national elections, and is a clear reprisal for support provided by rightsworkers in a politically-sensitive case. 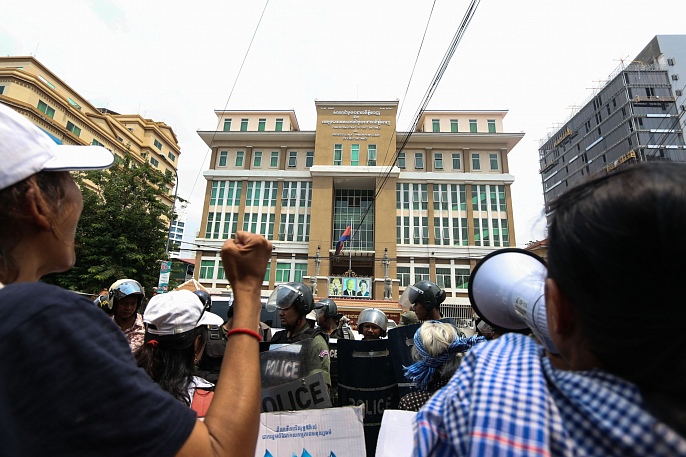 
Four senior staff of the Cambodian Human Rights and DevelopmentAssociation (ADHOC) – Ny Sokha, Nay Vanda, Yi Soksan and Lim Mony – were today chargedwith bribery of a witness under Criminal Code Article 548 and sent to CC1 andCC2 prisons in Phnom Penh. In addition, former ADHOC staffer Ny Chakrya,recently appointed deputy secretary-general of the NEC, and UNOHCHR staffer SoenSally were charged as accomplices to bribery of a witness (Criminal CodeArticles 29 & 548). Ny Chakrya was sent to Police Judiciare (PJ) prison. Ifconvicted, all six could be sentenced to between five and ten years’imprisonment.

The six human rights defenders were summonsed by the Anti-Corruption Unit(ACU) for questioning last week and all but the UNOHCHR staffer subject to at least four days ofinterrogation – firstly by the ACU and then by the prosecutor – in relation toa complaint signed by Khom Chandaraty, also known as Srey Mom. The complaintwas lodged following her questioning by anti-terrorism police and a prosecutor aboutan alleged affair with deputy opposition leader Khem Sokha, after ADHOC respondedto Srey Mom’s request for legal and material assistance. In the context of suchsupport, ADHOC provided Srey Mom with $204 to cover food and transport costs,including to attend questioning by judicial authorities. This legitimate expenditure of asmall sum of money to cover basic expenses of a client is now grotesquely beingportrayed by the ACU as bribery and corruption.

The targeting of UNOHCHR staffer Soen Sally by the ACU and the courthas disregarded his diplomatic immunity as an employee of the United Nations.The ACU, and later the Prime Minister himself, both argued that Soen Sally doesnot enjoy such protection.

The case is a farcical use of both the criminal justice system andstate institutions as tools to intimidate, criminalise and punish thelegitimate activities of human rights defenders and civil society. The ACU wascreated to tackle the endemic corruption prevalent in Cambodia, not to operateas a vehicle for government repression of civil society. The involvement of Ministryof Interior Central Security officers alongside ACU personnel dealing with thecase clearly demonstrates the securitization of civil society activities.

Under international human rightslaw, including treaties that Cambodia has ratified, Cambodia is legally boundto respect and protect the human rights of all people under its jurisdiction,including the rights to freedom from arbitrary deprivation of liberty, and freedomof expression, association and peaceful assembly.

“The charges brought against the six human rights defenders areblatantly politically-motivated and a direct attack against those serving peoplewho fall prey to Cambodia’s government,” said Naly Pilorge, LICADHO director.“These mounting attacks represent an alarming tightening of the noose aroundcivil society and those who work to uphold human rights, and clearly show thatthe government’s ultimate aim is total control ahead of the upcoming elections.”

Civil society reiterates its strong condemnation of the charges,demands the release on bail of the five and reaffirms the rights andfundamental freedoms of peaceful human rights defenders to conduct theiractivities free from threats and punishment. We further call for the judicialinvestigation to be conducted impartially and call for an end to executiveinterference in the judiciary.

This statement is endorsed by:

30. FIDH, within theframework of the Observatory for the Protection of Human Rights Defenders

58. World OrganisationAgainst Torture (OMCT), within the framework of the Observatory for theProtection of Human Rights Defenders