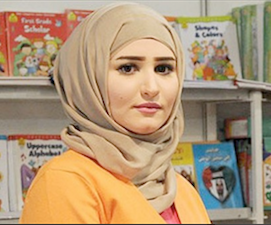 Kuwait’s Cyber Crimes Law haseffectively silenced dissent in the country, and brought human rights defendersto trial, including blogger Sara Al-Drees, who faces up to five years injail for a tweet. A trial observation report outlines the violations ofinternational law that occurred during her trial, following a mission to Kuwaitin November by a coalition of groups.

The coalition of rights groupswhich monitored the trial was composed of the Gulf Centre for Human Rights(GCHR), the Arabic Network for Human Rights Information (ANHRI), InternationalService for Human Rights (ISHR), and FIDH and the World Organisation AgainstTorture (OMCT) within the framework of the Observatoryfor the Protection of Human Rights Defenders.

The Public Prosecution’s officeaccused Al-Drees of allegedly defaming the Emir of Kuwait, violating the CyberCrimes law and the misuse of a mobile phone in relation to the tweets that shepublished on her twitter account, which were reported by the Cyber Crimes Unit.

A trial observer attended thehearing of Al-Drees in the Court of First Instance in Kuwait City on 24 November2016 and produced a trial observation report. The analysis of the charges andprosecution has been supplemented by field investigation and consultation withhuman rights defenders in Kuwait. The trial is ongoing and the next hearing is expectedin December 2016.

On 22 September 2016, the PublicProsecution issued an order to imprison Al-Drees for 21 days in connection withthe case. On 25 September 2016, Al-Drees surrendered herself voluntarily andwas transferred to the central prison. She began a hunger strike to protest herimprisonment.

On 06 October 2016, the CriminalCourt in Kuwait held the first hearing in the trial of Al-Drees. The courtordered her released on a bail of 500 Kuwaiti Dinars (US$1,656) and adjournedthe hearing to 27 October 2016. She was then freed from prison after the courtimposed a travel ban on her. See: http://www.gc4hr.org/news/view/1388.The hearing was adjourned on 27 October to 24 November.

Noting some of the violations ofinternational law, the trial observer says, “Al-Drees was subject to primafacie unlawful detention for 11 days and faces a maximum penalty of five years’imprisonment for tweets which, on any reasonable view, constitute a legitimateexercise in freedom of expression under international law.” However, someaspects of her case complied with the law, such as her ability to choose anindependent lawyer of her choice.

He continues, “The residualindependence of the Kuwaiti judicial system, in the face of decisions by statesecurity/the Public Prosecutor, is not adequate to remedy the unfairnesscreated by the laws themselves – Article 25, in particular.”

The trial observer notes,“Article 25 of the Penal Code already effectively places Kuwait's ruler beyondany public criticism. But the concurrent use of the new Cybercrimes law in thiscase constitutes a further erosion of the space for the free exchange ofopinion and ideas.”

The report also details widerlegal issues facing journalists and human rights defenders in the country,which forms part of the context to ongoing prosecutions by the State in 2016.

“The terms of political debate,which had been on the verge of a new opening after 2011, have been firmlynarrowed on all sides – not least through the closure of independent media likeAl-Yawm. Meanwhile the Bedoon issue remains off the table, the Courts remainfull and the Emir himself, as the Al-Drees trial indicates, lies beyond eventhe mildest of public reproach,” concludes the report.

GCHR, ANHRI, ISHR, FIDH and OMCT urge the authorities in Kuwait to:

1. Drop the charges against SarahAl-Drees, as they violate the right to freedom of opinion and expression;

2. Guarantee in all circumstancesthat all human rights defenders and bloggers are able to carry out theirlegitimate human rights activities and to exercise their right to freedom ofexpression without fear of reprisals and free of all restrictions includingjudicial harassment; and