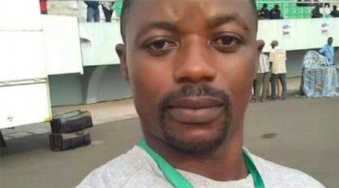 (Nairobi, June 9, 2020) – Cameroon’s government should ensure that the investigation into a journalist’s enforced disappearance and death in military custody is independent, effective, thorough, and impartial, four Cameroonian and six international organizations said today. United Nations (UN) Security Council members should urge accountability for the death of the journalist, Samuel Ajiekah Abuwe, known as Wazizi, when they are briefed on the situation in Cameroon during their June 12, 2020 meeting with the UN Office of Central Africa (UNOCA).
The police arrested Wazizi, 36, an English-speaking journalist at the privately owned broadcaster, Chillen Muzik and TV (CMTV), on August 2, 2019 in in Buea, South-West region, and transferred him to a military-run facility in the same city on August 7. On June 2, 3, and 4 Cameroonian and international media, as well as Reporters Without Borders and the Cameroon Trade Union of Journalists reported that they had learned Wazizi died in custody following torture, on an undetermined date.
“We are still shocked that authorities disappeared Wazizi and then covered up his death for 10 months, but we welcome the opening of an investigation and call on Cameroon’s government to make its findings public and ensure that all those responsible are brought to justice,” said Felix Agbor Nkongho, also known as Agbor-Balla, President of the Centre for Human Rights and Democracy in Africa ( CHRDA).
Wazizi’s transfer to the military facility on August 7 was the last time any of his family, friends, colleagues, or lawyers saw him, or learned anything of his fate from the authorities, making his continued detention an enforced disappearance. He was accused of “collaborating with separatists,” but his lawyers say he had not been charged with any offense before his disappearance.

The French Ambassador to Cameroon told the media on June 5 that President Paul Biya had assured him that an investigation will be opened into the Wazizi’s death. The declaration was made the same day that the military spokesman, Colonel Serge Cyrille Atonfack, announced that Wazizi had died of severe sepsis on August 17, 2019 at the military hospital in Yaoundé, Cameroon’s capital. No autopsy was performed, and it is not clear on what basis Atonfack made the statement.
Cameroonian authorities had not made any official statement about the death of Wazizi, nor had they responded to multiple request for information filed by his lawyers, international media groups such as Committee to Protect Journalists (CPJ) and other journalists from Radio France International until June 5.
“It took the government 10 months after Wazizi was forcibly disappeared to acknowledge he died in custody, and authorities did so only following significant national and international pressure,” said Cyrille Bechon of the Cameroonian rights organization Nouveaux Droits de l’Homme. “Cameroonian authorities were responsible for his life and safety while in detention and must provide a full accounting as to the circumstances of his detention and death.”
Atonfacksaid that Wazizi’s family had been informed about his death, but family members refute that, saying they were never told and had been seeking information on his whereabouts since his arrest. On August 13, 2019 Wazizi’s lawyers filed a habeas corpus application before the president of the high court of the Fako division, Buea, South-West region. The application was dismissed on technical grounds. Another habeas corpus was filed on November 13, but even then, the government did not disclose that he was dead.
When he announced the death, Atonfack also alleged that Wazizi was active in one of the several separatist groups operating in the South-West region. His lawyers said that no evidence has ever been produced to support the accusations.
“If a person is arrested under the anti-terror law, due process should be followed, and evidence brought to court,” said Emmanuel Nkea, a defense lawyer. “But this has never been the case and the government is trying to cover up the facts.”
The circumstances of Wazizi’s death underscore the dangers faced by Cameroonian journalists, particularly those who report on and investigate the crisis in the Anglophone regions of the country. The organizations have repeatedly documented the vulnerability of reporters in Cameroon to harassment, intimidation, threats, torture, arbitrary arrest, and detention by Cameroonian security forces and authorities.
Under national and international human rights law, Cameroon’s authorities have an obligation to account for every death in custody and should conduct an effective, thorough, and independent investigation into Wazizi’s enforced disappearance and death. The investigation should be capable of establishing the facts surrounding Wazizi’s disappearance and death, including whether he died following torture or other ill-treatment in custody, and identifying all those responsible with a view to bringing them to justice. Failure to investigate and prosecute those responsible would violate Cameroon’s obligations to protect people from arbitrary detention and deprivation of life and to provide an effective remedy, the groups said.
The situation in Cameroon is expected to come up at the June 12 UN Security Council meeting with UNOCA. Cameroon’s international partners and UN Security Council members should publicly raise concerns about the grave human rights abuses in Cameroon, including against journalists, political opponents, and human rights defenders. The Security Council should also take the long-overdue step of formally adding Cameroon to its agenda so that it can more closely monitor the situation there.
“When it comes to the respect for human rights, the UN and Cameroon’s international partners should take a stand and speak out,” said Maximilienne Ngo Mbe, executive director of the Central African Network of Human Rights Defenders (Réseau des Défenseurs des Droits de l'Homme de l'Afrique Centrale – REDHAC). “They should demand accountability for Wazizi’s death. Ensuring a thorough, impartial and transparent investigation into Wazizi’s death is the very least the Cameroonian government can do to show its commitment to protecting the country’s fragile media freedom is not hollow.” For more information, please contact: