The Observatory for the Protection of Human RightsDefenders, a partnership of the World Organisation Against Torture (OMCT) and FIDH,requests your URGENT intervention in the following situation in Bangladesh. 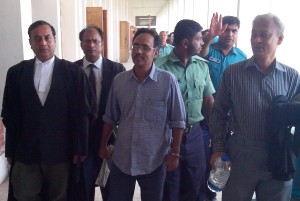 The Observatory has been informed with great concernabout further acts of judicial harassment against Messrs. AdilurRahman Khan and ASM NasiruddinElan, respectively Secretary and Director of the human rights non-governmentalorganisation Odhikar, in afurther attempt to sanction and silence their human rights activities[1].

According to the information received, on January 9,2017, the High Court Division of the Supreme Court of Bangladesh, presidedover by Justice M. Enayetur Rahim, dismissed the appeal filed by Messrs. Adilur Rahman Khan, also a memberof OMCT General Assembly and FIDH Vice-President, and ASM Nasiruddin Elan,aiming to contest the charges framed against them under Section 57 of theInformation and Communication Technology Act (ICT Act) 2006, in relation to afact-finding report issued by Odhikar on the killing of civilians by securityforces in May 2013. The High Court further decided tolift a stay order whichthe Supreme Court had granted to the two defenders in January 2014, and directed the CyberCrimes Tribunal to proceed with their prosecution (see background information).

On January10, 2017, the lawyers of the two defenders filed an appeal challenging the HighCourt's judgement and order dated January 9, 2017 before the Appellate Divisionof the Supreme Court of Bangladesh. In the afternoon, the Chamber Judge of theAppellate Division stayed the High Court’s judgment and order for four weeks,in order to give time to both parties to prepare for the case.

TheObservatory condemns the ongoing judicial harassment of Messrs. Adilur Rahman Khan and Nasiruddin Elan, which seems only to be aimed atsanctioning their legitimate human rights activities, and urges theauthorities to put an immediate end to it.

Following this publication, Messrs. Rahman Khan and Elanwere arbitrarily detained in 2013 for respectively 62 and 25 days until theywere both released on bail. On January 21, 2014, the HighCourt Division of the Supreme Court granted a stay of the trial in the CyberCrimes Tribunal. The stay order was subsequently challenged by the AttorneyGeneral’s Office in the Appellate Division of the Supreme Court.

On March 21,2016, the Appellate Division ordered that the hearing on the stay order was tocommence as early as possible before the High Court Division.

On January 3and 4, 2017, a hearing took place in two parts before a High Court Benchcomprised of Justice M. Enayetur Rahim and Justice Shahidul Karim.

Since 2013,attacks and harassment against Odhikar have been ongoing, including judicialharassment against both Messrs. AdilurRahman Khan and Nasiruddin Elan,as well as the surveillance and repression of Odhikar, its staff,and their relatives.

Odhikar isalso facing great difficulties to implement its activities, since its registrationhas not been renewed by the NGO Affairs Bureau (NGOAB) of the Government of Bangladeshand is still pending though all the required documents were submitted ontime. All of its bank accounts have been frozen and it has beenforbidden from receiving foreign funding.

In addition, on August 2, 2015, the Media and PublicRelations wing of the Police Headquarters in Dhaka issued a statementcondemning newspaper reports on extrajudicial killings, which cited Odhikar andBAMAK, another NGO, and declared that the statements made by the twoorganisations “contravene the existing laws of Bangladesh, which is synonymousto challenging Rule of Law and the judicial system”. The Police Press Releasefurther stated that questioning the activities of the police threatens thereputation of the police and amounts to defamation and a criminal act, and maybe considered as a subversive activity[2].

Please write to the authorities in Bangladesh, urgingthem to:

i.Guarantee, in all circumstances, the physical and psychological integrity ofMr. Adilur Rahman Khan and Mr. NasiruddinElan, as well as of all human rights defenders in Bangladesh;

ii. Put anend to any kind of harassment - including at the judicial level - against Mr.Adilur Rahman Khan and Mr. NasiruddinElan, as well as all human rights defenders in Bangladesh;

iii. Ensurein all circumstances that Odhikar as well as all human rights defenders inBangladesh are able to carry out their legitimate activities without anyhindrance and fear of reprisals;

v. Conformwith the provisions of the UN Declaration on Human Rights Defenders, adopted bythe General Assembly of the United Nations on December 9, 1998, especially its Articles 1 and 12.2;

Kindly inform us of any action undertaken quoting thecode of this appeal in your reply.

The Observatory for the Protection of Human Rights Defenders(the Observatory) was created in 1997 by the World Organisation Against Torture(OMCT) and FIDH. The objective of this programme is to intervene to prevent orremedy situations of repression against human rights defenders. OMCT and FIDHare both members of ProtectDefenders.eu, the EuropeanUnion Human Rights Defenders Mechanism implemented by international civilsociety.