(8 May 2019) – We, the undersigned organisations,strongly denounce the recent death threats addressed to Karapatan SecretaryGeneral, Cristina Palabay in the Philippines. These threats and the widerattacks against human rights defenders, journalists and civil societyrepresentatives signify the further constricting of civic space and thesilencing of dissent in the country. We collectively urge the Government of thePhilippines to respond to the threats against human rights defenders by takinggenuine and effective measures for their protection.

In 2018, the Department of Justice filed a petitionplacing UN Special Rapporteur Vicki Tauli-Corpuz and other human rightsdefenders on a list of individuals who supposedly had terrorist connections.Being publicly accused of such connections greatly endangers their security.[3]A month later, Duterte told people to ‘kill those useless bishops’,[4]referring, among others, to Bishop Pablo Salud, who is known for speaking outagainst the Government’s ‘war on drugs’. This too resulted in anonymous deaththreats. 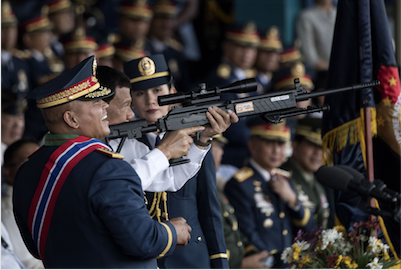 On the same day that Palabay received the latestthreats against her life, human rights worker Bernardino Patigas was killed.[5]Another human rights defender, Archad Ayao was killed just days later.[6]Of the human rights defenders cases monitored by FORUM-ASIA in Asia in2017-2018, the biggest percentage of killings - 48 per cent totalling 29 cases– took place in the Philippines.[7]

Attacks and reprisals against human rights defenderscontinue as the Government wages a systematic campaign to attack theindependence of democratic institutions and to constrict civic space in thecountry. Individuals within the legislative and judiciary branches havefaced reprisals for dissenting against Duterte’s policies, while journalistshave been targeted for their critical reporting. This campaign has includedefforts ranging from: a general failure to investigate attacks against humanrights defenders; to the use of repressive laws to judicially harass critics;to outright violence.

We condemn these attacks, and express deep concern forthe government policies and practices that restrict and repress civil societyand human rights defenders in the Philippines. We call on the Government of thePhilippines to ensure thorough and impartial investigations of the attacksagainst human rights defenders, and to ensure a safe and enabling environmentfor them to conduct their work. We also urge the House of Representatives toenact and implement the Human Rights Defenders Protection Bill that willprovide legal recognition to and safeguards for human rights defenders, inaccordance with the UN Declaration on the Rights of Human Rights Defenders.

We call on stakeholders in the international communityto continue to closely monitor the situation in the Philippines, and to usetheir interactions with the Government, including in the area of trade andbusiness, to emphasise the importance of reversing restrictive policies andbuilding an enabling environment for the respect and protection of humanrights. Specifically, we urge the UN Human Rights Council to advanceaccountability for human rights violations in the country by adopting aresolution establishing an independent international investigation intoextrajudicial killings in the government's 'war on drugs', and to call for ahalt to the attacks on human rights defenders, independent media, anddemocratic institutions.

FIDH (International Federation for Human Rights),within the framework of the Observatory for the Protection of Human RightsDefenders

World Organisation Against Torture (OMCT), within theframework of the Observatory for the Protection of Human Rights Defenders

[3] Palace:‘Terrorist’ tag on UN special rapporteur based on intel. https://globalnation.inquirer.net/164881/victoria-tauli-corpus-un-special-rapporteur-terrorist-cpp-npa