The Observatory for the Protection of Human Rights Defenders, a partnership of the World Organisation Against Torture (OMCT) and FIDH, requests your urgent intervention in the following situation in Afghanistan. 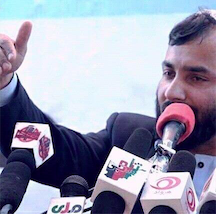 The Observatory has been informed by reliable sources about the killing of Mr. Ibrahim Ebrat, representative of the Civil Society Joint Working Group (CSJWG) in Zabul Province[1].

According to the information received, on May 20, 2020, Mr. Ibrahim Ebrat was attacked in Qalat by two unidentified men riding a motorbike while he was returning from Ramadan prayers. A bullet hit his head and he was subsequently transported to Mirwais hospital in Kandahar before being transferred to Kabul to receive intensive care. Mr. Ibrahim Ebrat died of his injuries on May 28, 2020.

The National Directorate of Security (NDS) claimed the attack was perpetrated by the Taliban. Before the attack, Mr. Ibrahim Ebrat had received numerous death threats from the Taliban, who urged him to cease his human rights activities. He reported these threats to local police, but no investigation was carried out.

The Observatory firmly condemns the killing of Mr. Ibrahim Ebrat, and urges the Afghan authorities to immediately carry out a thorough, transparent, and impartial investigation into his killing in order to identify all those responsible, bring them before an independent tribunal, and sanction them as provided by the law.

The Observatory is strongly concerned by the alarming number of targeted attacks against human rights defenders across Afghanistan, including murders, high-jacking, physical assaults and threats by both State and non-State actors[2].

The Observatory calls on Afghan authorities to implement the strategy for the protection of human rights defenders to which they publicly committed on January 20, 2020, and to put an end to the culture of impunity that prevails in the country.

Please write to the authorities of Afghanistan asking them to:

i. Guarantee, in all circumstances, the physical integrity and psychological well-being of all human rights defenders in Afghanistan;

ii. Carry out a swift, thorough, transparent, and impartial investigation into the killing of Mr. Ibrahim Ebrat in order to identify all those responsible, bring them before an independent tribunal, and punish them as provided by the law;

iii. Put an end to all acts of harassment against all human rights defenders in Afghanistan, and ensure that they are able to carry out their activities without hindrance and fear of reprisals in all circumstances;

iv. Conform with the provisions of the UN Declaration on Human Rights Defenders, adopted by the General Assembly of the United Nations on December 9, 1998, especially its Articles 1 and 12.2; and

v. Ensure in all circumstances the respect for human rights and fundamental freedoms in accordance with the Universal Declaration of Human Rights and with international and regional human rights instruments ratified by Afghanistan.

Please also write to the diplomatic missions or embassies of Afghanistan in your respective country.

[1] The CSJWG is a consortium of civil society organisations and human rights defenders present in the 34 provinces of Afghanistan and advocating against human rights violations in the country.