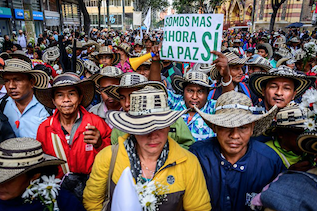 Geneva-Paris-Buenaventura, May 15, 2018 - Defending human rights remains a high-risk activity in Colombia, making it the deadliest country in the world for human rights defenders. In 2017, between 106 and 126 defenders lost their lives due to the State’s inability to protect them. These are the conclusions of the report of the Observatory (OMCT-FIDH), presented today in Buenaventura, a place that experiences all the risks faced by defenders in the country.

“It is obvious that defenders are not living in peace in Colombia, but what needs to be made clear to everyone is that there can be no peace without them”, said Gerald Staberock, OMCT Secretary General. “Colombia is at a historic crossroads as it could leave behind armed conflict and consolidate the rule of law, in which all human rights would be respected. This can only happen if safeguards are provided so that defenders can carry out their work freely and safely”.

The Observatory report identified four main factors increasing the vulnerability of human rights defenders and which must be urgently addressed by the authorities.

Firstly, the defence of human rights in Colombia cannot be guaranteed until the continuing operation of paramilitary structures is publicly acknowledged and all measures necessary to dismantle such groups are taken, since they are the main source of attacks faced by defenders.

Secondly, the stigmatisation and criminalisation of defenders remain a major concern. The report documents several worrying examples of the stigmatisation of defenders in 2017 via public statements and actions by all branches of the State (executive, legislative and judicial), as well as by the State security forces, which contribute to increasing the risk of attacks even further, within a context of extremely high levels of violence against defenders in Colombia.

Thirdly, despite the move to a post-conflict scenario, the legal environment and public policies continue to stigmatise and criminalise social protest, while State security forces still resort to an excessive use of force during demonstrations.

Finally, the best way to prevent attacks against defenders is through a functioning justice system. While progress has been made to tackle the impunity in attacks against defenders, as demonstrated by the increase of the rate of indictment achieved by the Public Prosecutor’s Office, the Observatory emphasises that cases can only be considered as solved when the perpetrators are sentenced, which means that 94.5% of the murders registered by the Prosecutor’s Office since 2016 remain in impunity. Moreover, current investigations fail to identify masterminds or planners as well as motives for the killings. Furthermore, other types of attacks such as threats are not sufficiently investigated. Challenges faced by the justice system remain significant.

“During my visit to Colombia exactly one year ago, we noted that the implementation of the peace agreement was far from being an easy task. Nevertheless, in light of the serious incidents detailed in this report, we call upon the international community to condition support for the State upon guarantees of the effective administration of justice ensuring the decrease of rampant impunity that persists in cases of killings and aggressions against defenders in Colombia”, declared Dimitris Christopoulos, FIDH President.

The Observatory launches its report today in the city of Buenaventura, where one defender received threats from paramilitary structures simply for having spoken to the Observatory delegation. The city also saw the repression of the Civic Strike in 2017. On the first anniversary of the strike, human rights defenders are facing a particularly critical situation, making Buenaventura an emblematic example of all the risks faced by defenders throughout Colombia.

If you want to meetthe many faces of human rights defenders in Colombia and learn more about thechallenges they face, visit www.sosdefenders.org

You’ll see that on topof this report, we have produced infographics, a short documentary film and aseries of video profiles of Colombian HRDs for you to see first hand what theyare going through. Please feel free to share it all widely through your socialnetworks!

The Observatory for the Protection of Human Rights Defenders (The Observatory) was created in 1997 by the World Organisation Against Torture (OMCT) and FIDH. The objective of this program is to prevent or remedy situations of repression against human rights defenders. OMCT and FIDH are both members of ProtectDefenders.eu, the European Union Human Rights Defenders Mechanism implemented by international civil society.