Human rights defenders and activists were killed,kidnapped and shot at in Iraq on International Human Rights Day and the followingday. On the night of 10 December 2019, poet and civil society activist Ali Al-Lami(photo 1), was kidnapped while he was returning to his sister's house after participatingin Al-Tahrir Square demonstrations. His body was found at 2am, dumped in Al-Sha`barea, north of Baghdad. 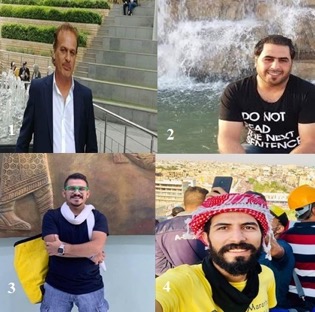 Al-Lami, a 49-year-old from the city of Kut, participatedin demonstrations in Tahrir Square as a representative of his city, and has alwayscalled on hisFacebook page for the demonstrations to remain peaceful.

Also that same day, in thecapital, Baghdad, communications with peaceful demonstrator Ayoub MuhammadAl-Khazraji were cut off from the early morning hours, leading to concernsfor his safety. He was broadcasting the events of the demonstrations, moment bymoment, through his pages on social media.

On 11 December 2019, human rights defenders Salman KhairallahAl-Mansoori (photo 3) and Omar Khadum Al-A’mri (photo 4) werekidnapped around noon. Their last contact was with a female colleague at 11:30am,when they went to Al-Nawab Street in Al-Khadhimiya district to buy some tentsfor protesters in Al-Tahrir Square. Their phones were closed at 15:30 pm, assome reports stated that the security forces had arbitrarily arrested themwithout a judicial warrant.

Al-Mansoori is an environmental activist and Al-A’mri isa civilian activist, and both are members of the Iraqi Social Forum as part ofthe initiative of “Protectors of Tigris” which aims to protect the Tigris Riverfrom drought through various activities.

Also on the evening of 11 December 2019, in theAl-Shula area of ​​Baghdad, civil society activist Alaa Bashi Al-Jizani (photo2) died after a car collided with him and its driver killed him and fled.Al-Jezani supported and participated in peaceful demonstrations.

Thatsame evening, in Diwaniyah, the capital of Al-Qadisiyah Governorate, civilsociety activist Ahmed Al-Suwaidi and his colleague ArshadAl-Abdullah were shot at in their car on Doctors Street by a police officerat a temporary check point, leaving them at risk of losing their lives. The Governorate’spolice commander announced that he has ordered legal action to be taken againstthe police officer who opened fire on the car.

TheIraqi government must end all forms of violence immediately and without anyconditions, and ensure the protection of peaceful demonstrators and activists throughoutthe country by defending their civil and human rights, respecting publicfreedoms, including freedom of expression, freedom to demonstrate peacefully,and freedom of the press. It must also enact a fair election law and amend allother oppressive laws that perpetuate corruption and entrench the power oflarge political parties.

TheIraqi government should also conduct prompt, independent and impartialinvestigations into the killings of demonstrators and activists, with the aimof disseminating the findings and bringing all those responsible to justiceaccording to international standards.

We call upon President Barham Salih,Speaker of the Iraqi Parliament Mohammad Al-Halbousi, and Prime Minister AdelAbdul Mahdi to reveal the fate of all abducted human rights defenders andactivists, because true reform starts with the protection of human dignity, andtheir absence means that the government has no real intention of reform.

FIDH, within the framework of the Observatory forthe Protection of Human Rights Defenders

MetroCenter for Journalists' Rights and Advocacy

World Organisation Against Torture(OMCT), within the framework of the Observatory for the Protection of HumanRights Defenders