TheObservatory for the Protection of Human Rights Defenders, a joint programme ofthe World Organisation Against Torture (OMCT) and the International Federationfor Human Rights (FIDH), has received new information and requests your urgentintervention in the following situation in Greece. 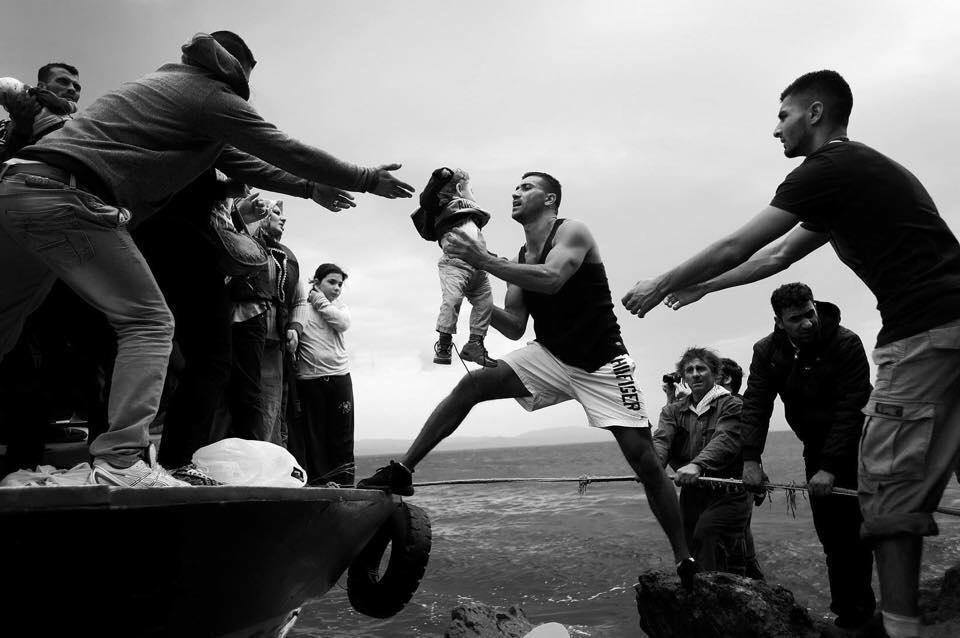 TheObservatory has been informed by reliable sources about the ongoing crackdownon civil society actors providing humanitarian assistance to migrants andasylum seekers arriving in the Greek islands, even including judicialharassment against several groups and NGOs acting to protect migrants' rights, of Team Humanity Denmark.

According tothe information received, on January 14, 2016, Mr. Salam Kamal-Aldeen, Iraqi-Moldavian citizen living in Denmark whovolunteers at Team Humanity Denmark[1],Mr. Mohammad Abbassi, a Danish volunteer at Team Humanity Denmark andMessrs. Manuel Blanco, José Enrique and Julio Latorre,three Spanish volunteers at the NGO “Professional Emergency Aid” (PROEM-AID)were arrested by the Hellenic Coast Guard (HCG) during a rescue operation, oncharges of “violations of the migration and weapons’ law”[2].The HCG searched and confiscated their boat, along with its rescue equipmentand Mr. Aldeen’s cell phone. The five volunteers were arrested and detained ina police cell, without being informed of their rights, without being providedwith any interpretation nor any possibility of communicating with theirembassies[3].The same day, the five were brought handcuffed before the Prosecutor andInvestigating Magistrate at the Mytilene Courthouse. They were informed thatthey were given two days to prepare their defence and brought back to custodyin a police station. On January 16, Mr. Aldeen was again brought before theInvestigating Magistrate to provide his defence statement, and was furtherquestioned. After hearing the defence statement, the Investigating Magistrateand the Prosecutor jointly agreed to release him under the followingconditions: a) a prohibition to leave the country, b) the obligation to reportweekly to the police station of his residence and c) a bail of 10,000 Euros tobe paid within one month. The four other activists were released on the sameday on a bail of 5,000 Euros. The five defendants face charges of up to tenyears of imprisonment. Though Mr. Aldeen has challenged the preventivemeasures, at the time of publication of this appeal, he remained under theaforementioned restrictions pending the end of the investigation.

Moreover,during the month of February, in the Idomeni border area between Greece andMacedonia, more than 60 volunteers from several countries (i.e. Germany,Switzerland, the Netherlands, Austria, Spain, U.K., Czech Republic), operatingwithin the framework of Aid Delivery Mission (ADM)[4],were subjected to verbal harassment by the police, including threats of arrest,and an arbitrary house search by armed policemen and trained dogs without amandate and no further explanations on the reasons. During that search, nothingillegal was found. On April 12, 2016 three activists from the NGOs Shorba Crewand ADM on their way to serve at a tea tent were brought to the Evzoni[5]police station by the special police anti-criminality unit (OPKE) and noinformation was given to them on the reason for their arrest. Their car wassearched, they were bodily searched (a female member of the group was forced totake off her clothes), and were asked to provide their biometric data(fingerprints and photographs)[6].

On January28, 2016, a joint Ministerial Decision was published on the official GovernmentGazette – The Greek Republic, prohibiting all independent, unregisteredvolunteer activities conducted in Lesvos and puttingnon-governmental organisations (NGOs) and other civil society actors understate control and massive profiling, at both organisational and individuallevel[7].This Ministerial Decision set up a committee meeting every week to register,classify and co-ordinate all civil society actors operating in Lesvos. Thecommittee shall also deal with the registration, identification andcertification of all NGOs and independent volunteers, proceed to the evaluationof their work and control the organisation of their actions (Paragraph 7.2).The committee’s approval is a necessary requirement for the inclusion of anycivil society entity into the Registry and the consequent possibility to carryout their work in a legal way.

Anyunregistered entity conducting human rights work to support migrants and asylumseekers may face charges of complicity in a “criminal organisation”. Suspicionof this offence legitimises the use of practices incompatible with the right toprivacy, such as phone tapping, record of conversations, video surveillanceoutside of the home, even at the stage of preliminary investigation, withoutthe need to notify suspects.

Finally, on February 21, 2016 a last minute amendmentwas made to a Law voted by the Greek Parliament[8],in violation of several provisions of the Parliament’s Rules of Procedures[9]. Thenew provision assigns the supervision and coordination of services[10]provided to migrants and asylum seekers to the Greek Army and Minister ofDefence, in newly established army-run facilities. This provision has led to acoordinated effort to stop civil society activities in camps that are not runby the army, through extensive threats of arrest and prosecution[11]. Moreover, several journalists and NGOs,including the Hellenic Action for Human Rights “Pleiades”’, are often not allowed access to army-run facilities[12]. The Greek Council for Refugees (GCR)[13] andAmnesty International have been exceptionally granted access some detentioncentres and described the living conditions in such camps as inhumane[14].

TheObservatory strongly condemns this crackdown on civil society actors in Greece,calls on the Greek authorities to put an end to the ongoing attempts tocriminalise NGOs and volunteers working in the country in the field ofhumanitarian assistance to migrants and asylum-seekers or otherwise preventthem from carrying out their work and urges them to lift the ban on civilsociety activists and journalists to enter army-run camps.

Moreover,the Observatory calls upon the Greek authorities to repeal, or at least amend,the joint Ministerial Decision on registration, approval and state control ofNGOs and volunteers in Lesvos, as well as Article 96 of the Law 4368/16establishing the supervision of humanitarian assistance by the military, inorder to put its legislation in line with international human rights standardsratified by Greece.

Finally, the Observatory calls upon Greek authoritiesto put an end to the judicial harassment against Mr. Salam Kamal-Aldeen and thefour other prosecuted volunteers, as it only seems to be aimed at sanctioningtheir legitimate human rights and humanitarian activities.

i. Guarantee in all circumstances thephysical and psychological integrity of Mr. Salam Kamal-Aldeen and otheractivists, as well as of all human rights defenders and humanitarian activistsin the country;

ii. Put an end to all acts of harassment- including at the judicial level - against Mr. Salam Kamal-Aldeen and othervolunteers, includingmembers of ADM, as well as against all human rights defenders in Greeceso that they are able to carry out their work without hindrances;

iii. Undertake a thorough, impartial and transparentdisciplinary and criminal investigation into reported acts of violations ofhuman rights defenders’ procedural rights, in order to identify all thoseresponsible, bring them before a competent, independent and impartial tribunaland prosecute them according to the law;

iv. Repeal the joint MinisterialDecision on registration and state control of NGOs and volunteers, and Article96 of the Law 4368/16 in order to put its legislation in line withinternational human rights standards ratified by Greece;

v. Conform with the provisions of theUN Declaration on Human Rights Defenders, adopted by the General Assembly ofthe United Nations on December 9, 1998, especially:

Article1, which states that “everyone has the right, individually and in associationwith others, to promote and to strive for the protection and realisation ofhuman rights and fundamental freedoms at the national and internationallevels”; and

Article12.2, which provides that “"the State shall take all necessary measures toensure the protection by the competent authorities of everyone, individuallyand in association with others, against any violence, threats, retaliation, defacto or de jure adverse discrimination, pressure or any otherarbitrary action as a consequence of his or her legitimate exercise of therights referred to in the present Declaration”; and

vi. More generally, ensure in allcircumstances the respect for human rights and fundamental freedoms inaccordance with the Universal Declaration of Human Rights and with internationaland regional human rights instruments ratified by Greece.

Pleasealso write to the diplomatic mission or embassy of Greece in your respectivecountry.

[1] The Danish NGO “Team Humanity”has been collaborating with the Hellenic Coast Guard (HCG) on several rescueoperations since September 2015. Following media coverage, Mr. Aldeen hasbecome a prominent figure of migrant support. Pictures of him while rescuing migrantsat sea are on worldwide media, making him, for instance, the cover of the lastHuman Rights Watch’s World Report 2016.

[2] The accusations were asfollows: the attempted “felony of illegal transport from abroad toGreece of third country nationals, who do not have a right to enter the Greekterritory” and the offence of “carrying illegally a weapon”, since theirrescue equipment included also asmall knife, which is used in case of a victim’s entanglement in ropes and insimilar cases.

[4] ADM is a group of Dutchvolunteers operating in Idomeni on the Greek-Macedonia border, who preparesapproximately 6.000 meals per day for refugees, distributes aid, performs forchildren in camps, visits and supports detained migrants, among which manychildren, in the area close to the borders.

[5] Evzoni is a locality at the border between Greece and the Republic ofMacedonia.

[7] The General Secretariat ofAegean and Island Coordinating Committee produced two forms, one called “Organisation profile”(asking for personal detailsof all volunteers working with the organisation naming their source(s) ofincome, affiliation with other groups active in Greece, proposed place ofaction and type of voluntary work, proposed analytical program/actiondescription) and another “Personal profile” (requestinginformation on professionalcapacity, previous actions, date of arrival and departure,affiliation/cooperation with organisation(s) already active in Greece, proposedvoluntary action in Greece, curriculum/action description, proposed place ofaction and type of voluntary work), that all civil societyorganisations and independent volunteer providing support to asylum-seekers onthe Greek islands will have to complete in order to register with the policeand be able to carry out their work.

[9] For instance, theobligation of having the text of any proposed provision pass through thescrutiny of the Scientific Committee of the Parliament, for an assessment ofe.g. its rationale, related justification and its compatibility with theConstitution. The last minute introduction of Article 96 in the text of the lawdid not allow for such procedure to take place.

[10] Services include housing, food, transportation and medical support, as well asthe coordination of all socialinstitutions and NGOs involved in providing a humanitarian response to thearrival of asylum-seekers and migrants in Greece.

[11] Thearmy and Greek authorities indeed started threatening volunteers and NGOsworking in non official camps with prosecution for “violating the migrationlaw”, as they have been doing with volunteers at sea.

[12] See Pleiades’ Press Release, February 28, 2016. The NGO Pleiadesis an NGO registered in Greece since 2009 operating in the field of humanrights and carrying out sensitization campaigns, strategic litigation andoffering pro bono high quality legal, medical, social and psychologicalsupport as well as educational and cultural services to vulnerable socialgroups whose rights are being threatened or violated. It cooperates at regionaland international level with inter-governmental institutions such as theCouncil of Europe and several United Nations mechanisms and bodies.

[13] GCR is an NGO founded in 1989 to support refugees and asylum seekers in Greece,is an implementing partner of UNHCR and works closely with Greek ministries. Italso has Special Advisory Status in the UN Economic and Social Council(ECOSOC). GCR’s work concentrates on providing legal, material, psycho-socialassistance and vocational counseling to asylum seekers and refugees.

[14] See GCR’s Press Release on thedetention centre VIAl, Chios, of 31 March 2016, Pleiades’ Report on living conditions at the Malakasa Camp,April 5, 2016 and Amnesty International’s reports on the conditions in Moria Camp on Lesvos and VIAL centreon Chios, of April 7, 2016. A delegation of the Council of Europe’s Committeefor the Prevention of Torture and Inhuman or Degrading Treatment or Punishment(CPT) carried out an adhoc visit to Greece from 13 to 18 April 2016. Theconclusions are not public yet and will be discussed with Greek authorities.