Obstacles to freedom of association

The Observatory for the Protection of Human Rights Defenders, a partnership ofthe World Organisation Against Torture (OMCT) and FIDH, requests your urgentintervention in the following situation in Malaysia.

The Observatory has been informed by the Malaysian human rightsnon-governmental organisation Suara Rakyat Malaysia (SUARAM) about the policeharassment against its Executive Director, Mr. Sevan Doraisamy. 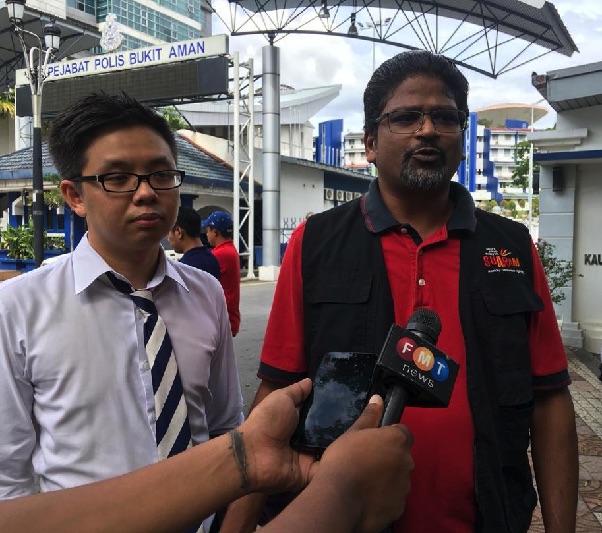 According to the information received, on December 13, 2019, Mr. SevanDoraisamy was contacted by the police to be questioned under Section 505 (b) ofthe Penal Code for organising a public forum on security laws.

On December 17, 2019, Mr. Sevan Doraisamy appeared before the PoliceClassified Criminal Investigation Unit (D5) at Bukit Aman police headquartersin Kuala Lumpur, and was questioned for an hour about a forum SUARAM organisedon November 25, 2019 to discuss the use of the draconian Security Offences(Special Measures) Act 2012 (SOSMA) to arrest and detain 12 individuals withalleged ties to the now-defunct Liberation Tigers of Tamil Eelam (LTTE) in SriLanka[1].

In a separate case, on October 11, 2019, the Kangar District Police Chief filed adefamation complaint against Mr. Doraisamy under Section 500 of the Penal Codeand Section 233 of the Communications and Multimedia Act, after SUARAM hadlodged a complaint with the National Human Rights Commission (SUHAKAM) andorganised a press conference to denounce the wrongful arrest of a father andhis son in September 2019 and the abuses to which the two had been subjectedduring their detention. Both were mistakenly arrested over a kidnapping reportinvolving a 15-year-old girl. On October 16, 2019, the police questioned Mr.Doraisamy for almost five hours in relation to this case.

Mr. Doraisamy has beensummoned for questioning by police at least 10 times over the past five yearsin connection with his human rights work with SUARAM.

The Observatory strongly denouncesthe harassment of Mr. SevanDoraisamy, which seems to be only aimed at punishing him from his legitimatehuman rights activities, and in particular for denouncing human rightsviolations and misuse of power by police.

The Observatory urges theauthorities of Malaysia to putan end to any form of harassment, including at the judicial level, against Mr.Sevan Doraisamy and all human rights defenders in Malaysia, and ensure in allcircumstances that they are able to carry out their legitimate human rightsactivities without any hindrance or fear of reprisals.

Please write to the authorities of Malaysia asking them to:

i. Put an end to any form of harassment, including at thejudicial level, against Mr. Sevan Doraisamy and all human rights defenders inMalaysia, and ensure in all circumstances that they are able to carry out theirlegitimate human rights activities without any hindrance or fear of reprisals;

ii. Conformwith the provisions of the UN Declaration on Human Rights Defenders, adopted bythe General Assembly of the United Nations on December 9, 1998, especially itsArticles 1, 5 and 12.2;

Pleasealso write to the diplomatic representations of Malaysia in your respectivecountries.

The Observatory for theProtection of Human Rights Defenders (the Observatory) was created in 1997 bythe World Organisation Against Torture (OMCT) and FIDH. The objective of thisprogramme is to prevent or remedy situations of repression against human rightsdefenders. OMCT and FIDH are both members of ProtectDefenders.eu, the European Union Human Rights Defenders Mechanism implemented byinternational civil society.