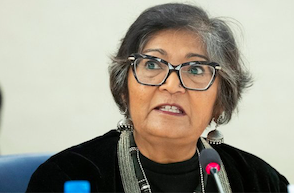 More than 60 human rights organisations and 180 prominent individuals have signed the letter below supporting South African human rights lawyer, Yasmin Sooka, in the face of threats and vilification from the Sri Lankan Government.

Yasmin Sooka has been recently threatened by the head of Sri Lankan intelligence, Major General Suresh Sallay, with a lawsuit accusing her of conspiracy against the state in response to her work on behalf of victims.

For the full list of signatories, please read here

The undersigned organisations and individuals wish to express our strenuous opposition to the unfounded allegations made by the Government of Sri Lanka against Ms Yasmin Sooka. These allegations and threats against Ms Sooka seek to undermine Ms Sooka’s long standing reputation as a human rights defender and globally recognised justice advocate.

Ms Yasmin Sooka is a leading human rights lawyer, activist and an international expert in the field of transitional justice, gender and international criminal law. Her expertise stems from a lifetime of defence of human rights and justice.

In July 2010, Ms Sooka was appointed to the three- member Panel of Experts advising the UN Secretary General on accountability for war crimes committed during the final stages of the war in Sri Lanka. Ms Sooka was later appointed by the UN Secretary General, in June 2015, to a three-member Independent Review Panel which investigated Allegations of Sexual Abuse by Foreign Military Forces in the Central African Republic as well as the UN Response to the Allegations.

In June 2016, Ms Sooka was appointed by the President of the UN Human Rights Council to chair a three-person Commission on Human Rights in South Sudan, a post she currently holds. In addition, Ms Sooka is the Director of the International Truth and Justice Project, Sri Lanka. Ms Sooka is the former Executive Director of the Foundation for Human Rights in South Africa, an independent non-profit Foundation established in 1996 by President Mandela’s government and the European Union. The Foundation’s aims and objectives are to address the violations of the past and to build a human rights culture in South Africa. The Foundation is also a grant-maker to civil society.

Yasmin Sooka also chairs the Foundation’s Task Team to deal with the Unfinished Business of the South African Truth and Reconciliation Commission addressing issues of criminal accountability and reparations for victims in South Africa.

We call attention to the fundamental principles set forth in the Declaration on the Right and Responsibility of Individuals, Groups and Organs of Society to Promote and Protect Universally Recognized Human Rights and Fundamental Freedoms, also known as the UN Declaration on Human Rights Defenders. In particular, we would like to refer to articles 1 and 2 of the Declaration which state that everyone has the right to promote and to strive for the protection and realization of human rights and fundamental freedoms at the national and international levels and that each State has a prime responsibility and duty to protect, promote and implement all human rights and fundamental freedoms.

We the undersigned call upon the Government of Sri Lanka to demonstrate their serious commitment to accountability and respect for human rights rather than continually undermining those who strive for those aims.