Obstacles to freedoms of movement and

The Observatory for the Protection ofHuman Rights Defenders, a partnership of the World Organisation Against Torture(OMCT) and FIDH, has received new information and requests your URGENTintervention in the following situation in Malaysia.

The Observatory has been informed aboutthe release and subsequent deportation of Mr. AdilurRahman Khan, Secretary of the human rights non-governmentalorganisation Odhikar inBangladesh[1],also a member of OMCT General Assembly and FIDH Vice-President. 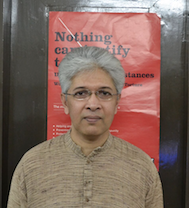 According to the information received, on July 20, 2017, at around8 pm, Mr. Adilur Rahman Khan was deported back to Bangladesh afterbeing detained for more than 14 hours by Malaysian Immigration at Kuala LumpurInternational Airport.

The Observatory recallsthat on July 20, 2017, at about 4.00 am, Mr. Adilur Rahman Khan was deniedentry into Malaysia and detained by immigration officers upon his arrival inKuala Lumpur, where he had come to attend the National Conference on DeathPenalty organised by the Anti-Death Penalty Asia Network (ADPAN) from July 21to 22, 2017.

At no time during hisdetention, he was given access to a lawyer nor a clear reason for hisdetention. It is only around the end of this detention that he could meet withrepresentatives of the National Human Rights Commission of Malaysia (SUHAKAM).

Pleasewrite to the authorities in Malaysia, urging them to:

i.Guaranteein all circumstances the freedoms of movement, peaceful assembly andassociation of Mr. Adilur Rahman Khan, as well as of allhuman rights defenders in Malaysia;

ii.Put an end to any kind of harassment against Mr. Adilur Rahman Khan as well asall human rights defenders in Malaysia, and ensure that they are able to carry out theirlegitimate activities without any hindrance and fear of reprisals;

iii.Conform with the provisions of the UN Declaration on Human Rights Defenders,adopted by the General Assembly of the United Nations on December 9, 1998,especially its Articles 1 and12.2;

Pleasewrite to the authorities in Bangladesh, urging them to:

i. Guarantee, in allcircumstances, the physical and psychological integrity of Mr.Adilur Rahman Khan, as well as of all human rights defenders in Bangladesh;

ii. Refrain from anykind of harassment against Mr. Adilur Rahman Khan, as well as all humanrights defenders in Bangladesh, and ensure in all circumstances that they areable to carry out their legitimate activities without any hindrance and fear ofreprisals;

iii. Conform with theprovisions of the UN Declaration on Human Rights Defenders, adopted by theGeneral Assembly of the United Nations on December 9, 1998, especially itsArticles 1 and 12.2;

The Observatory for the Protectionof Human Rights Defenders (the Observatory) was created in 1997 by the WorldOrganisation Against Torture (OMCT) and FIDH. The objective of this programmeis to intervene to prevent or remedy situations of repression against humanrights defenders. OMCT and FIDH are both members of ProtectDefenders.eu, the EuropeanUnion Human Rights Defenders Mechanism implemented by international civilsociety.