​URGENT APPEAL - THE OBSERVATORY
New InformationLKA 001 / 0314 / OBS 019.3Judicial harassment /Obstacles to freedom of expressionSri LankaJuly 6, 2015 The Observatory for the Protection of Human Rights Defenders, a joint programme of the World Organisation Against Torture (OMCT) and the International Federation for Human Rights (FIDH), has received new information and requests your urgent intervention in the following situation in Sri Lanka. New information:
The Observatory has been informed by reliable sources about the removal of the overseas travel ban on Mr. Ruki Fernando, a human rights adviser to the Colombo-based human rights organisation INFORM, and about the ongoing judicial harassment against him. 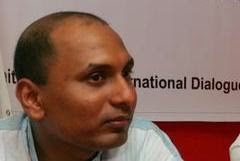 Please write to the authorities in Sri Lanka, urging them to:

i. Guarantee in all circumstances the physical and psychological integrity of Mr. Ruki Fernando, as well as of all human rights defenders in Sri Lanka;

iii. Put an end to any acts of harassment - including at the judicial level - against Mr. Ruki Fernando and all human rights defenders in Sri Lanka and ensure that they are able to carry out their peaceful and legitimate activities without any hindrance and fear of reprisals;

iv. Conform with the provisions of the UN Declaration on Human Rights Defenders, adopted by the General Assembly of the United Nations on December 9, 1998, especially regarding the following Articles:

Please also write to the diplomatic missions or embassies of Sri Lanka in your respective country.