The Observatory for the Protection ofHuman Rights Defenders, a partnership of FIDH and the World OrganisationAgainst Torture (OMCT), has received information and requests your urgentintervention in the following situation in Singapore. 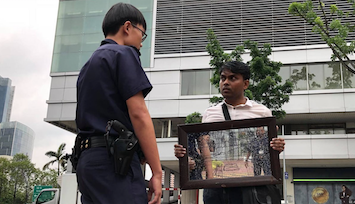 The Observatory has beeninformed by reliable sources about the sentencing and arbitrary detention ofMr. Seelan Palay, a human rights activist and artist who has criticizedSingapore’s human rights record on many occasions, including with regard to theuse of the death penalty, restrictions on freedom of expression, and arbitrarydetention.

According to theinformation received, on October 3,2018, Singapore’s State Court convicted Mr. Seelan Palay for “staging anunlawful performance without a permit” under Section 7 of the 2009 Public OrderAct and sentenced him to pay a S$2,5000 fine (around 1,570 Euros). FollowingMr. Seelan Palay’s refusal to pay the fine, he was ordered to serve a two-weekprison term.

Mr. Seelan Palay was arrested on October 1, 2017outside Parliament House, where he briefly staged a solo performance by holdingan art piece that was meant as a tribute to former political prisoner andelected Member of Parliament (MP) Mr. Chia Thye Poh. The performance, titled“32 years: The interrogation of a mirror”, aimed at commemorating the 32 yearsMr. Chia Thye Poh spent either in detention without trial or under travelrestrictions[1].Mr. Seelan Palay started the performance at Speakers’ Corner in Hong Lim Parkbefore continuing on to the National Gallery and then Parliament House. Mr.Seelan Palay had obtained a National Parks Board (NParks) permit that allowedhim to conduct his performance only at Speakers’ Corner. On October 2, 2017,Mr. Seelan Palay was released on a S$5,000 (around 3,145 Euros) bail, pendinginvestigation.

On May 18, 2018, Singapore’s State Court heard thecase of Mr. Seelan Palay. During the hearing, the Deputy Public Prosecutorrequested the court to sentence Mr. Seelan Palay to a fine of S$3,000 (around1,890 Euros) - the maximum penalty under the 2009 Public Order Act. The DeputyPublic Prosecutor justified the request by arguing that Mr. Seelan Palay hadpreviously been convicted and fined on charges of participating in an assemblywithout permit on two separate occasions in 2010.

The Observatory condemns the sentencing andarbitrary detention of Mr. Seelan Palay, which are only aimed at punishing thelegitimate exercise of his rights to freedom of peaceful assembly and freedomof opinion and expression. The Observatory calls on the authorities ofSingapore to immediately and unconditionally release Mr. Seelan Palay and endall acts of judicial harassment against him and all human rights defenders inthe country.

Please write to theauthorities of Singapore asking them to:

i. Guarantee inall circumstances the physical and psychological integrity of Mr. SeelanPalay and all human rights defenders in Singapore;

ii. Immediately andunconditionally release Mr. Seelan Palay, as his detention isarbitrary because it is merely aimed at punishing him for his human rightsactivities;

iii. Put an end to all actsof harassment, including at the judicial level, against Mr. SeelanPalay and all human rights defenders in Singapore, and ensure that they are ableto carry out their activities without hindrance;

iv. Conform to theprovisions of the UN Declaration on Human Rights Defenders, adopted by theGeneral Assembly of the United Nations on December 9, 1998, especially Articles1, 6(c) and 12.2; and

v. Ensure in allcircumstances the respect for human rights and fundamental freedoms inaccordance with the Universal Declaration of Human Rights.

Please also write to the diplomatic missions orembassies of Singapore in your respective country.

The Observatory for the Protection of HumanRights Defenders (the Observatory) was created in 1997 by FIDH and the WorldOrganisation Against Torture (OMCT). The objective of this programme is tointervene to prevent or remedy situations of repression against human rightsdefenders. FIDH and OMCT are both members of ProtectDefenders.eu, the European Union Human Rights Defenders Mechanismimplemented by international civil society.

[1] Mr. Chia Thye Poh was elected to Singapore’sParliament in 1963. He was arrested in 1966 for organising a street processionwithout permit demanding the release of all political prisoners and thesuppression of repressive laws. After being detained for 23 years, he wasreleased in 1989 and allowed to live under restrictions imposed on his travels,political activities, and public speeches for nine years, until 1998, when allthe restrictions against him were finally lifted.