English
Français
Español
New informationMMR 001/ 0117 / OBS 008.1Sentencing / Arbitrary detentionBurmaOctober 16, 2017
The Observatory for the Protection of Human Rights Defenders, a partnership of FIDH and the World Organisation Against Torture (OMCT), has received new information and requests your urgent intervention in the following situation in Burma.
New information: 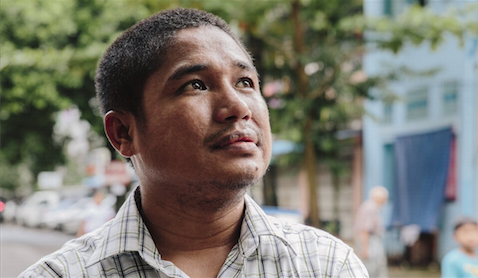 The Observatory has been informed by reliable sources about the sentencing of environmental rights defender Mr. Khaing Myo Htun, co-founder of the NGO Natural Resources for the People[1], board member of the Arakan Natural Resources and Environmental Network, member of the advocacy group Arakan Oil Watch, and Deputy Spokesperson for the Arakan Liberation Party (ALP), at the end of a repeatedly delayed trial in Sittwe, Rakhine State.
According to the information received,on October 12, 2017, the Sittwe Township Court found Mr. Khaing Myo Htun guilty of “disturbing public tranquillity” and “incitement” under Article 505(b) and 505(c) of the Criminal Code, and sentenced him to 18 months in prison. Mr. Khaing Myo Htun reportedly does not intend to appeal the verdict. The Observatory recalls that Mr. Khaing Myo Htun has been detained since July 25, 2016 in Sittwe prison. He will now have to serve three months and ten days in prison as a result of time already served. The charges against Mr. Khaing Myo Htun stem from a statement issued by the ALP on April 24, 2016, in which the party alleged human rights abuses by the Burma army (Tatmadaw) in Rakhine State, including claims of forced labour. The statement led to an army officer filing a complaint against Mr. Khaing Myo Htun under Article 505(b) and 505(c) of the Criminal Code. The Observatory believes that Mr. Khaing Myo Htun’s sentencing and prolonged arbitrary detention are mere acts of retaliation for his legitimate and peaceful human rights activities, and recalls that Burmese authorities frequently use Article 505(b) and 505(c) of the Criminal Code to silence human rights defenders and other critical voices in Burma. The Observatory is further concerned that the prolonged arbitrary detention of Mr. Khaing Myo Htun has led to a severe degradation of his health. During his detention, Mr. Khaing Myo Htun fainted three times in prison. The Observatory urges the Burmese authorities to immediately and unconditionally release Mr. Khaing Myo Htun and ensure his physical and psychological integrity while in detention. Background information: On July 25, 2016, Mr. Khaing Myo Htun was arrested and detained in Sittwe prison, pending a court decision on whether to charge him with “disturbing public tranquillity” and “incitement “under Article 505(b) and 505(c) of the Criminal Code. On August 25, 2016 and January 13, 2017, the Sittwe Township Courtdenied bail to Mr. Khaing Myo Htun, despite his poor health condition. On April 5, 2017, Mr. Khaing Myo Htun was charged with disturbing public tranquillity and incitement under Article 505(b) and 505(c) of the Criminal Code. Actions requested: Please write to the authorities of Burma asking them to: i.Guarantee in all circumstances the physical and psychological integrity of Mr. KhaingMyo Htun and of all human rights defenders in Burma; ii. Release Mr. Khaing Myo Htun immediately and unconditionally as well as all human rights defenders detained in Burma, as his detention only aims at punishing him for his human rights activities; iii. Put an end to all acts of harassment - including at the judicial level - against Mr. Khaing Myo Htun and all human rights defenders in Burma, and ensure in all circumstances that they are able to carry out their activities without hindrance; iv. Comply with all the provisions of the UN Declaration on Human Rights Defenders, adopted by the United Nations General Assembly on December 9, 1998, in particular with its Articles 1 and 12.2; v. Ensure in all circumstances respect for human rights and fundamental freedoms in accordance with international human rights standards. Addresses: · U Htin Kyaw, President; Fax: +95 1 652 624 · Lt Gen Kyaw Swe, Minister for Home Affairs; Fax: +95 67 412 439; Email: mohamyanmar@gmail.com · Daw Aung San Suu Kyi, Minister of Foreign Affairs; Fax: +95 67 412396 · U Win Mra, Chairman of the Myanmar National Human Rights Commission; Email: chmyanmarnhrc@gmail.com · U Tun Tun Oo, Union Attorney General; Email: ago.h.o@mptmail.net.mm · Maj Gen Zaw Win, Director General, Myanmar Police Force, Ministry of Home Affairs; Fax: +95 67 412006; Email: mpfserver@gmail.com · HE Mr. Htin Lynn, Ambassador Extraordinary and Plenipotentiary, Permanent Representative to the United Nations in Geneva, Switzerland; Fax: +41 22 732 89 19, +41 22 732 73 77; Email: mission@myanmargeneva.org · Embassy of Myanmar in Brussels, Belgium; Fax: +32 2 705 50 48, Email: mebrussels@skynet.be Please also write to the diplomatic representations of Burma in your respective countries. *** Paris-Geneva, October 16, 2017 Kindly inform us of any action undertaken quoting the code of this appeal in your reply. The Observatory for the Protection of Human Rights Defenders (the Observatory) was created in 1997 by FIDH and OMCT. The objective of this programme is to prevent or remedy situations of repression against human rights defenders. FIDH and OMCT are both members of ProtectDefenders.eu, the European Union Human Rights Defenders Mechanism implemented by international civil society. To contact the Observatory, call the emergency line: · E-mail: Appeals@fidh-omct.org · Tel and fax FIDH + 33 1 43 55 25 18 / +33 1 43 55 18 80 · Tel and fax OMCT + 41 22 809 49 39 / + 41 22 809 49 29 [1] An organisation advocating for the rights of farmers, women, and ethnic leaders in Rakhine State.