Obstacles to freedom of expression

The Observatory for the Protection of Human Rights Defenders, a partnership of the World Organisation Against Torture (OMCT) and FIDH, has received new information and requests your urgent intervention in the following situation in The Philippines. 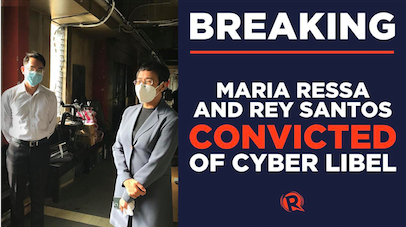 The Observatory has been informed by reliable sources about the sentencing of Ms. Maria Ressa, founder and Executive Editor of the news website Rappler, and Mr. Reynaldo Santos Jr., a former Rappler researcher. Rappler is an online news outlet known for its investigative reporting and its criticism of the Duterte administration’s actions, especially of the extra-judicial killings committed as part of Duterte’s “war on drugs”.

According to the information received, on June 15, 2020, the Branch 46 of the Manila Regional Trial Court found Ms. Maria Ressa and Mr. Reynaldo Santos Jr. guilty of “cyber libel” under the Cybercrime Prevention Act of 2012 in relation to an article published by Rappler on May 29, 2012 (see Background Information).

In a retroactive application of the Cybercrime Prevention Act of 2012, Ms. Maria Ressa and Mr. Reynaldo Santos were sentenced to an indeterminate prison sentence ranging from six months and one day to six years. Both defenders were fined 200,000 PHP (about 3,585 EUR) for moral damages and another 200,000 PHP for exemplary damages. Ms. Maria Ressa and Mr. Reynaldo Santos Jr. were allowed to post bail pending the appeal.

The sentencing of Ms. Maria Ressa and Mr. Reynaldo Santos occurs in the context of a systematic campaign of criminalization and intimidation against the news media Rappler that started following President Duterte’s state of the nation address on July 24, 2017. During his speech, President Duterte accused Rappler and the broadcast media company ABS-CBN of being “fully owned by Americans”, in violation of laws restricting foreign ownership of mass media.

The Observatory recalls that since President Duterte took power in June 2016, independent media journalists reporting on human rights abuses in the Philippines have faced reiterated attacks and acts of intimidation in a context of deliberate attempt to suppress freedom of press and expression and to silence all critical voices. Moreover, the pending Anti-Terrorism Act of 2020 dangerously targets freedom of press as it criminalizes any speeches and writings inciting to commit terrorism[1].

The Observatory expresses its utmost concern over the sentencing and judicial harassment of Ms. Maria Ressa and Mr. Reynaldo Santos and condemns in the strongest terms the abusive use of laws to criminalize journalists and human rights defenders that speak out against extrajudicial killings and, more generally, human rights violations in the Philippines.

The Observatory calls upon the authorities of the Philippines to immediately put an end to any act of harassment, including at the judicial level, against Ms. Maria Ressa and Mr. Reynaldo Santos and all human rights defenders in the country.

On May 29, 2012, Rappler published an article signed by Mr. Reynaldo Santos Jr. denouncing the alleged ties between businessman Wilfredo Keng and the then-Supreme Court Chief of Justice Renato Corona. In February 2014, the news website corrected a word from the article.

On October 11, 2017, Mr. Wilfredo Keng denounced Rappler for “criminal label” before the National Bureau of Investigation (NBI) under the Cybercrime Prevention Act of 2012. Even though the publication predated the law, Mr. Wilfredo Keng argued that updating the article was a form of “re-publication” and thus constituted an unlawful act. The case was initially dismissed by the NBI for lack of basis. However, the complaint was later revived following the decision issued by the Philippines Department of Justice (DOJ) on January 10, 2019, in which the DOJ supported the prosecution by arguing that the change constituted “continuous publication”.

On February 13, 2019, Ms. Maria Ressa was arrested by NBI agents following an arrest warrant issued by Branch 46 of the Manila Regional Trial Court. The defender spent the night at the NBI Cybercrime Division after the Pasay night court judge refused to process her bail request. She was released the next day.

In a separate case, in January 2018, the Securities and Exchange Commission (SEC) announced the revocation of Rappler’s licence to operate on the grounds that it breached ownership rules when it accepted money from foreign investors. On July 26, 2018, the Court of Appeals denied Rappler’s petition for review and agreed with the SEC that the company’s issuance of Philippine Depositary Receipts was “tantamount to some foreign control,” but said Rappler must be given “reasonable time” to make the necessary corrections. The court did not enforce the SEC’s shutdown order through a revocation of Rappler’s licence.

Please write to the authorities of the Philippines to urge them to:

i. Guarantee in all circumstance the physical and psychological integrity of Ms. Maria Ressa and Mr. Reynaldo Santos Jr., as well as of all other human rights defenders in the Philippines;

ii. Put an end to all act of harassment, including at the judicial level, against Ms. Maria Ressa and Mr. Reynaldo Santos Jr. as well as all other human rights defenders in the Philippines, and ensure in all circumstances that they are able to carry out their legitimate activities without any hindrance and fear of reprisals;

iv. Conform in any circumstances with the provisions of the UN Declaration on Human Rights Defenders, adopted by the General Assembly of the United Nations on December 9, 1998, in particular its Articles 1 and 12.2.

v. Ensure in all circumstances respect for human rights and fundamental freedoms in accordance with international human rights standards and instruments ratified by the Philippines.

Please also write to the diplomatic representations of the Philippines in your respective countries.