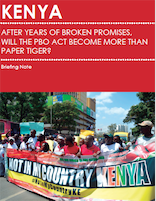 Geneva-Paris, July 5, 2018 - 2,000 days after signing into law the 2013 Public Benefits Organizations (PBO), the government is still refusing to implement the Act and civil society in Kenya remains subjected to a draconian outdated NGO law. In a briefing note published today, the Observatory for the Protection of Human Rights Defenders (OMCT-FIDH) renews its call to the Kenyan government to uphold its promises to create an enabling environment for civil society in the country.

2,000 days after its signature into law, concerns remain as to the Government’s failure to implement the 2013 PBO Act, which intended to open up the space for Kenyan civil society. Following the adoption of the 2010 Kenyan Constitution, which clearly enshrines the right to freedom of association, on January 13, 2013 President Mwai Kibaki had signed into law the PBO Act, a progressive piece of legislation which aims at ensuring a transparent and efficient regulation of civil society in Kenya, setting out clear rules on their registration and creating a system of incentives in support of organisations conducting public benefit activities.

Since then, two High Court’s rulings have requested the Government to order the commencement of the PBO Act and in July 2017 leading political parties signed a pledge to implement it. In spite of all of this, the Government of Kenya not only failed to fulfil its promises, but pursued a path of criminalisation and harassment of civil society organisations, and attempted on several occasion to amend or annul the PBO Act.

“The widening gap between the progressive legal framework sparked by the entry into force of the 2010 Constitution and the government’s lack of commitment to the PBO Act is of extremely high concern to us, in particular in a climate in which the threat of refusal of registration is increasingly being used as a tool to sanction peaceful and legitimate human rights activities” said OMCT Secretary General Gerald Staberock.

In May 2017, the Observatory published an international fact - finding mission report illustrating a concerning pattern of violence and harassment aimed at silencing dissenting voices and perpetuating impunity in the country, further heightened by the delay in implementing the 2013 PBO Act.

Between December 2014 and 2015 only, more than 1,500 NGOs were threatened of deregistration by the NGO Coordination Board, based on claims that they failed to submit financial records. Several organisations have further been accused of links with terrorism, and their bank accounts have been frozen while the work permits of foreign employees have been withdrawn. The Observatory has also documented several attempts to hinder the work of human rights organisations in the aftermath of the 2017 presidential elections.

“The Kenyan government must stand with human rights defenders and give full recognition to the pivotal role that a free and unhindered civil society space plays in a democracy. After 2000 days of inaction, we renew our call to the Kenyan authorities to immediately implement the High Court rulings so as to put an end to the legal limbo to which NGOs are presently tributary” concluded FIDH Vice-President Sheila Muwanga.

The Briefing Note is available in English.