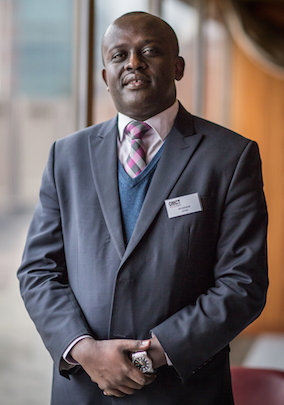 Geneva, 15 December 2016 (OMCT) – Armel Niyongere lovesthe law. He became a lawyer because he cannot bear injustice. Living inwar-torn Burundi where human rights violations occur on a daily basis, hedecided to defend the voiceless victims. But this noble choice has a price:exile.

“Living outside the country with my family is difficult,” he said. “I see thatthey are in danger, that I am in danger.”

Harassed and threatened by the BurundianGovernment that also issued an international arrest warrant against him, Mr.Niyongere was forced to leave his home country in 2015 - and to take his familywith him. Mr. Niyongere was among those who said it was unconstitutional forPierre Nkurunziza to run for a third presidential term in April 2015. Thecandidacy announcement sparked weeks of widespread demonstrations, a failedcoup attempt, and the arrest of hundreds of demonstrators framed as“terrorists”.

This permanent state of violence, withkillings and injury of protesters and police officers having become routine,takes place in a country that had already suffered two ethnically-basedgenocides and a 12-year civil war that had left some 300,000 dead. It raisesconcern over another looming civil war and humanitarian crisis fuelled bypropaganda aimed at dividing the country along ethnic lines.

In this unrest, the anti-tortureorganization Mr. Niyongere heads, Action des Chrétiens pour l’Abolition de laTorture (ACAT Burundi), was quickly outlawed, as were many other civil-societyorganizations that had been monitoring the human rights situation in Burundi.Its funding was frozen, leaving it incapable of any action from inside thecountry.

Yet Mr. Niyongere could not watch moreviolence unravel without trying to right all the wrongs he heard of - whetherthey had been committed against the civilian population by the army and Imbonerakure militia,or against agents of the State­.

With support from the World OrganisationAgainst Torture (OMCT), within the framework of ProtectDefenders.eu, he therefore founded SOS-TortureBurundi from neighbouring Rwanda. Like him, some 200,000 fellowcountrymen are said to have left the country since the presidential campaign.

The initiative monitors the spiraling of thehuman rights crisis in Burundi. It documents acts of torture, violence,systematic arbitrary arrests, enforced disappearances and extrajudicialexecutions inside Burundi, and then share the information nationally andinternationally through weekly and quarterly reports. The reports are used tocall on the international community to apply urgent measures and make policychanges to protect victims in Burundi.

The Government has since requested Mr.Niyongere be disbarred in Burundi, which the country’s highest court lateroverruled. Yet, he seems undeterred by such reprisals for his involvement inthe submission of alternative information on violations in Burundi before theUnited Nations torture watchdog during this summer’s periodic review of howBurundi has applied the Convention Against Torture.

Mr. Niyongere continues to file casesbefore the International Criminal Court, representingvictims from abroad, because “the Burundian justice system simply does not work– it has become a tool used by those in power.”

“It is my duty to make a contribution, tohelp the population that is struggling, to protect the voiceless, to representthem in the courts,” he said.

This article is partof a series of 10 profiles to commemorate International Human Rights Day, 10December, and to recognize the vital role of human rights defenders worldwide.

OMCT wishes to thankthe Republic and Canton of Geneva and the OAK Foundation for their support. Itscontent is the sole responsibility of OMCT and should in no way be interpretedas reflecting the view(s) of the supporting institutions.