ManfredNowak, United Nations (UN) Special Rapporteur on torture from 2004 to 2010 and memberof the advisory board of International Partnership for Human Rights (IPHR),Brigitte Dufour (IPHR), Yevgeniy Zhovtis (Kazakhstan International Bureau forHuman Rights and Rule of Law, KIBHR) and Miguel Martin Zumalacarregui (WorldOrganisation against Torture, OMCT) met government officials in Astana on 13October and called on them to promptly implement the Concluding Observationsissued to Kazakhstan by the Committee against Torture (CAT) in 2014 in order toend torture.

“Kazakhstanhas made significant progress in its fight against torture and other forms ofill-treatment in recent years, but torture continues – KIBHR has registeredover 70 allegations since the beginning of 2015 – and impunity is the norm”,said Yevgeniy Zhovtis.

Thedelegation met with the Deputy Justice Minster and her advisors; the Ambassadorat Large of the Foreign Ministry; and an official of the Prosecutor General’sOffice. The delegates regret that it was not possible to meet with the InteriorMinistry and other agencies they had requested to meet, including the Ombudsmanand the National Human Rights Commission under the President of Kazakhstan. 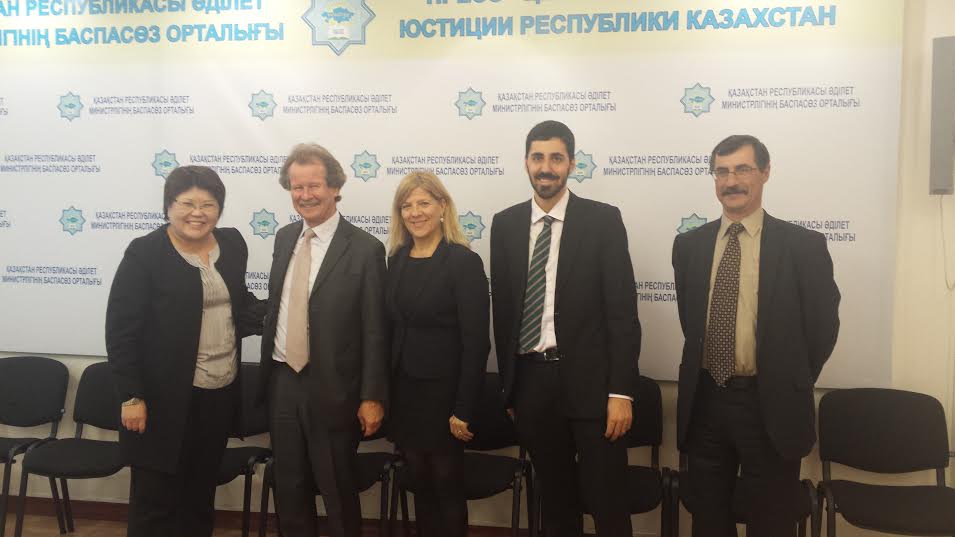 On12 October, prior to the meetings with government officials, Manfred Nowak,Brigitte Dufour and Miguel Martin Zumalacarregui met eleven representatives ofthe NGO Coalition against Torture in Kazakhstan for a briefing on theCoalition’s key concerns and recommendations.

In November2014, when the CAT last reviewed Kazakhstan’s compliance with its obligationsas a state party to the Convention against Torture and Other Cruel, Inhuman andDegrading Treatment or Punishment, it commended Kazakhstan for setting up aNational Preventive Mechanism (NPM), for strengthening legal safeguards ofdetainees in the Criminal Procedure Code and for other important legislativechanges. However, it highlighted that “allegations of torture and ill-treatmentcommitted by law enforcement officials, including the threat of sexual abuseand rape, (persisted)” and that “the data based on official sources reveal(s)that less than 2 per cent of the complaints of torture received by the Statehave led to prosecutions”.

“Ifyou really want to eradicate torture, you must adopt a comprehensiveanti-torture strategy”, said Manfred Nowak. “First of all, as has also beenrecommended by the CAT, a special body should be established that is taskedwith conducting prompt, impartial, thorough and effective investigations intoall allegations of torture and ill-treatment. This body has to be fully independentof the police. It could be set up under the Department of Special Prosecutors atthe General Prosecutor’s Office of Kazakhstan, whose employees currently lackinvestigative powers.“

Anotherissue of concern to the NGO delegates was the transfer of authority over thepenitentiary system back to the Ministry of the Interior in 2011, after thegovernment had made progress by placing it under the authority of the Ministryof Justice in 2002. Thus, Kazakhstan was the first country in Central Asia tohave taken this important step, but also to revert it.

“Thefact that it is the Ministry of the Interior that is again in charge of placesof detention following an unexpected and rushed decree is worrisome when itcomes to detainees’ rights, as the risk of torture is significantly higher.Kazakhstan must urgently reverse this decision and ensure the full transfer ofcontrol over places of detention and investigation to the Ministry of Justice,a step that does not require complex institutional changes”, said BrigitteDufour.

Whilewelcoming the establishment of the NPM, the delegation told governmentofficials that major shortcomings substantially limiting its functioning neededto be addressed.

“Inorder for Kazakhstan’s “Ombudsman+” model to work adequately, the NPM needs to beable to operate with more independence from the Ombudsman. NPM members should havethe powers to decide by themselves and with full independence on all visitsthey wish to carry out and be able to publish reports immediately after their visits”,said Manfred Nowak.

Inaddition, Coalition members and the international delegates stressed theimportance of adopting a general law to govern the functioning of the NPM aswell as its mandate and powers. A clear legal framework should replace thecurrent inadequate provisions that are scattered in various parts of thelegislation and letters of assurances which complement the current laws.

Alast issue raised during discussions with government officials was the need to ensurethe prompt implementation of UN treaty body decisions on individual cases. Whiletwo torture victims, whose cases were subject to decisions by UN treaty bodies,have since been awarded compensation for moral harm by civil courts inKazakhstan, the perpetrators have not been punished in any of the cases ruledon by UN treaty bodies. A proper legal framework is needed to be able toensure the full implementation of such decisions.

“TheCAT requested Kazakhstan to submit information by 28 November 2015 on key torture-relatedconcerns. We urge the authorities to use this opportunity to demonstrate theircontinued commitment to end torture and to implement the recommendations raisedby the CAT and our delegation“, Miguel Martin Zumalacarregui concluded.

Forfurther information and interviews with any of the organizations issuing thisstatement, please contact: