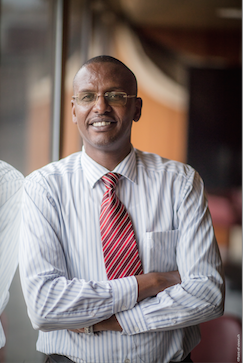 Geneva, 16 December2016 (OMCT) - It took Samwel Mohochi twoyears of legal battles to clear his grandfather's name after theseventy-year-old was picked up on his way out of church and shot by thepolice for allegedly trying to disarm an officer during the arrest. He does notwant it to be as hard for others to win their case.

"I felt that Ineeded to make a contribution to those people who might not necessarily be ableto afford legal representation, those voiceless people to whom the system canbe so unjust," said Mohochi, explaining what drove him to defend the humanrights of others.

Today a lawyer withthe Supreme Court of Kenya and an international advocate before the UnitedNations Human Rights Council and other treaty monitoring bodies, when he beganhis work Kenya was an autocratic State that denied the existence of torture.Yet it soon became apparent that the State had specifically designed facilitiesto torture political prisoners.

Kenya has changedover time. While the torture chambers are now gone and the State acknowledgesthat torture and extrajudicial killings do occur, it argues they are notcarried out systematically as the result of a policy, but only by a few rottenapples. When Mohochi started his human rights work, the torture victims andsurvivors he helped were mostly academics, lawyers and doctors who werepolitically dissenting with the State’s actions. Today, it is not politicalprisoners who are targeted, but the marginalized, the disenfranchised and theeconomically disempowered, according to Mohochi.

"The unemployedyouth, the poor, those who earn less than one dollar a day, you'll find thatthose are the people who are more prone to suffer from torture," heexplained, stating that what is occurring is tantamount to a criminalization ofpoverty.

Mohochi hasnonetheless seen progress over time that gives him hope, and the small gainsachieved by human rights defenders are slowly building. He explains that humanrights defenders in Kenya were for instance successful in removing the power ofpolice officials to extract confessions from suspects and in ensuring thatcoroners now undertake investigations into cases of extrajudicial killings.Those are key first steps towards redress.

He believes that the messagethat his works sends to the public is vital. Now after several years of work,and convictions against police officers, the public is more informed about itsright. Police officers and security agents are being charged, whether thisresults in a prison sentence or not, showing that violence against civilians isunjust. Mohochi sees this as a "big lesson to society".

"When some of usstarted this work, the public did not realize that the police are not allowedto mistreat you."

Yet what Mohochi describesas his greatest achievement so far is not the change of mind-set on the part ofthe general public but of many police officers. By investigating violations andpunishing culprits, human rights defenders help remove the shield of impunitythat so far protected the rotten apples, leaving these officials who abusehuman rights isolated – just like the victims are when in the hands of cowardlytorturers. Ironic. To these people he says:

"When we gethold of you, you are alone, the Government will not protect you. You will loseyour job and go to jail."

This article is partof a series of 10 profiles to commemorate International Human Rights Day, 10December, and to recognize the vital role of human rights defenders worldwide.

OMCTwishes to thank the Republic and Canton of Geneva and the OAK Foundation fortheir support. Its content is the sole responsibility of OMCT and should in noway be interpreted as reflecting the view(s) of the supporting institutions.