English
Français
Español
​New informationTZA 001 / 1219 / OBS 113.1Arbitrary detention /Judicial harassment
TanzaniaJanuary 15, 2020 The Observatory for the Protection of Human Rights Defenders, a partnership of FIDH and the World Organisation Against Torture (OMCT), has received new information and requests your urgent intervention in the following situation in Tanzania. New information: 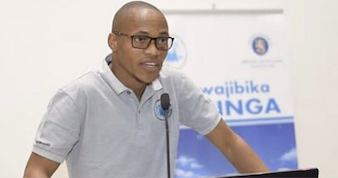 The Observatory has been informed by reliable sources about the continuing arbitrary detention and judicial harassment faced by Mr. Tito Magoti, Mass Education Officer at the Legal and Human Rights Center (LHRC). According to the information received, on January 7, 2020, during the second mention on the case against Mr. Tito Magoti, in which he is prosecuted under non-bailable economic charges (see background information), the Resident Magistrate’s Court of Dar es Salaam at Kisutu adjourned the trial on the ground that further investigation was needed. His next hearing is scheduled for January 21, 2020 before the same Court. He is still detained at Segerea Remand Prison awaiting trial. The Observatory expresses its utmost concern over the illegal arrest, ongoing judicial harassment and continuing arbitrary detention of Mr. Tito Magoti, which seems to be merely aiming at sanctioning his human rights activities, and is particularly alarmed by the use of non-bailable accusations as a way to avoid his release. The Observatory urges the Tanzanian authorities to release Mr. Tito Magoti immediately and unconditionally, drop all charges against him, and ensure that all judicial proceedings are carried out in full compliance with his right to a fair trial as protected under international law. Background information: On December 20, 2019, around 10:30 am, Mr. Tito Magoti was abducted by five unknown people at Mwenge, Dar es Salaam. He was lured by text messages apparently from Mr. Theodory Giyani, a friend of his, who had actually been arrested the day before and whose phone was used by the police to communicate with Mr. Magoti. Between December 20 and 22, 2019, police confirmed Mr. Magoti's arrest and detention, without indicating neither the charges against him nor his whereabouts. The police reportedly questioned him about his online activism on Twitter, where he regularly reports on issues related to human rights, the rule of law, and good governance, as well as his relationship with several leading online activists and opposition voices. During his interrogation, he had no access to his lawyers. On December 24, 2019, Mr. Magoti was brought before the Resident Magistrate’s Court of Dar es Salaam and charged with "leading organised crime" (para. 4(1)(a) of the First Schedule and Sections 57(1) and 60(2) of the Economic and Organized Crimes Control Act), "possession of a computer program designed for the purpose of committing an offence" (Section 10(1)(&) of the Cyber Crimes Act) and "money laundering" (Sections 12(d) and 13(a) of the Anti-Money Laundering Act). The offences he is charged with are unbailable so he cannot be released until he is tried. Actions requested: Please write to the authorities of Tanzania asking them to: i. Guarantee in all circumstances the physical and psychological integrity of Mr. Magoti as well as of all human rights defenders in Tanzania; ii. Release Mr. Tito Magoti immediately and unconditionally, since his detention is arbitrary as it seems to be merely aimed at sanctioning his human rights activities; iii. End of all forms of harassment, including at the judicial level, against Mr. Magoti as well as against all human rights defenders in Tanzania, and ensure in all circumstances that they are able to carry out their work without any hindrance or fear of reprisals; iv. Comply with all the provisions of the UN Declaration on Human Rights Defenders, adopted by the United Nations General Assembly on December 9, 1998, in particular with its Articles 1, 6 and 12.2; v. More generally, ensure in all circumstances respect for human rights and fundamental freedoms in accordance with international and regional human rights instruments ratified by Tanzania. Addresses:Please also write to the diplomatic representations of Tanzania in your respective countries. ***Paris-Geneva, January 15, 2020 Kindly inform us of any action undertaken quoting the code of this appeal in your reply. The Observatory for the Protection of Human Rights Defenders (the Observatory) was created in 1997 by FIDH and OMCT. The objective of this programme is to prevent or remedy situations of repression against human rights defenders. FIDH and OMCT are both members of ProtectDefenders.eu, the European Union Human Rights Defenders Mechanism implemented by international civil society.