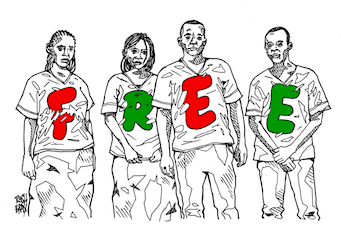 Paris-Geneva, 5 June 2020 - The Ntahangwa Court of Appeal (Bujumbura) confirmed today the sentencing of four journalists of independent media group Iwacu - Egide Harerimana, Christine Kamikazi, Terence Mpozenzi and Agnès Ndiribusa - in spite of a baseless prosecution case. The Observatory for the Protection of Human Rights Defenders (FIDH-OMCT) denounces this travesty of justice, which constitutes a flagrant attempt to silence one of the few remaining sources of independent information in Burundi, and which comes just four years after the disappearance of Iwacu journalist Jean Bigirimana. The four journalists, imprisoned since October 2019, must be freed immediately and unconditionally.

Today, the Court of Appeal of Ntahangwa (Bujumbura) upheld the sentencing of the four Iwacu journalists of two and a half years in prison and fines of 500 euros. These journalists were simply doing their job by going last October to the province of Bubanza to investigate reports of unrest. It was for having attempted to carry out this investigation that they were prosecuted for the peculiar charges of "an impossible attempt to abet a threat to the internal security of the State," for lack of evidence against them. The independent press group, whose motto is "Voices of Burundi," is one of the last independent media organisations in the country.

"This verdict is a new warning for the last Burundian journalists trying to do their job, in a country where international journalists have not been able to go for years and where most civil society actors are in exile. The intended message of this decision is very clear: ‘stop trying to cover events hostile to the regime and don’t go where the regime has not invited you’. Burundi has just invented a sort of ‘reporting offence’,” denounces Alice Mogwe, President of FIDH. "We call on diplomatic missions in Burundi to request the immediate and unconditional release of these journalists, especially since the poor sanitary conditions and overcrowding in prison raise fears of a possible covid-19 outbreak and a severe degradation of health conditions in their prison."

Egide Harerimana, Christine Kamikazi, Terence Mpozenzi and Agnès Ndiribusa were arrested on 22 October 2019, along with their driver, Adolphe Masabarakiza, who was subsequently released. At the time of their arrest, the four journalists were going to investigate reports of clashes early that morning between Burundian security forces and a rebel group in Musigati, in the western province of Bubanza, at the border with the Democratic Republic of Congo, and which led to the displacement of displaced civilians. Despite having informed the provincial authorities of their travel in the region, they were arrested as soon as they arrived on the scene, before being able to begin their work. They were found guilty of "an impossible attempt to abet a threat to the internal security of the State" on 30 January 2020 by the Bubanza High Court. The appeal hearing was held on 6 May at the Bubanza High Court and the verdict, issued today, was expected within 30 days.

"Unfortunately, this verdict is typical of the constant judicial harassment of human rights defenders in Burundi," added Gerald Staberock, Secretary General of OMCT. "Other defenders, like Germain Rukuki, a former employee of ACAT-Burundi - sentenced to 32 years in prison and whose appeal trial is under deliberation before the Supreme Court of Burundi, with a verdict expected by the end of the month - and Nestor Nibitanga of APRODH, who was sentenced to five years in prison, are still behind bars for legitimately defending human rights. They, too, must be released immediately,” he concluded.