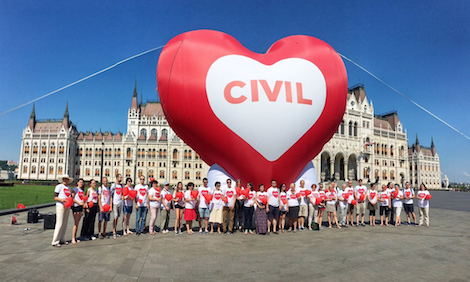 On June 20, 2018, World Refugee Day, the Hungarian Parliament adopted Bill T/333, known as the ‘Stop Soros’ bill, which includes three different Acts[1]. Under the vague language of the Act on the social responsibility of organisations supporting illegal migration, anybody deemed to be aiding migrants by voicing concern or organising support, or by providing any form of human or humanitarian assistance, including legal advice to migrants, could face criminal charges and jail terms.

“These laws are ‘a never before seen’ in Europe since the laws of Nuremberg. It is a direct attack on the very idea of the rule of law and humanity in Europe. Let’s be clear: this is not about a private feud against George Soros. It is about some of the most basic principles of human rights, namely providing assistance to people in need and defending their rights. This is outright illegal and must be a wake-up call for all those in Europe including Germany, Poland, or Austria looking the Hungarian Government as soul partners”,said OMCT Secretary General Gerald Staberock.

Through the vague and general notion of ‘promoting and supporting illegal migration’, the ‘Stop Soros’ package criminalises the exercise of fundamental human rights such as freedom of expression and freedom of association – which are not only protected under Hungarian Fundamental Law but also under the European Convention on Human Rights (ECHR) and the European Union Charter of Fundamental Rights. During the same week, the targeted assault against NGOs continued with the Hungarian Government’s proposal to introduce a 25% tax for NGOs working with migrants, thus seriously threatening their financial capacity.

Furthermore, these laws blatantly violate migrants’ and asylum seekers’ right to a fair trial and could infringe Article 8(2) of the EU Asylum Procedures Directive, which requires Members States to ensure that organisations providing advice and counselling to asylum seekers have effective access to border crossing points including transit zones and that, if such activities can be regulated, they cannot be rendered impossible.

By adopting the “Stop Soros” package, the Hungarian Government openly ignored the requests of the Council of Europe’s Venice Commission, which was reviewing the draft legislation and was expected to release its final opinion a few days later. In its opinion adopted on June 22-23, 2018, the Venice Commission requested the law to be repealed, as it introduced a disproportionate restriction on Articles 10 and 11 of the ECHR on freedom of association and freedom of expression[2]. The Venice Commission also stated that “there may be circumstances in which providing ‘assistance’ is a moral imperative or at least a moral right”.

“We are extremely concerned by this pattern which seeks to criminalise the assistance provided by NGOs to migrants and asylum seekers, violates the fundamental principles of the UN Declaration on human rights defenders and shows extreme lack of coherence with the European Union’s commitment to protect human rights defenders as one of the major priorities of its external human rights policy. It is high time the European Union starts applying its external principles to its own member States”,added FIDH Secretary General Dan Van Raemdonck.

These anti-migration laws are yet another example that migration is used to silence civil society organisations and drastically reduce the space in which they are operating[3]. This takes place against a backdrop of a rapidly deteriorating situation of the rule of law in Hungary[4]where several laws have been passed in recent years to undermine the independence of the judiciary,[5]and to target civil society organisations among others.[6]This State-sponsored harassment of civil society organisations has notably prompted the European Parliament to flex his muscle last year when it decided in favour of starting Article 7(1) of the Treaty on the functioning of the European Union, to be used against Member States where a serious risk of systemic breach of the EU’s fundamental principles exists.[7]

As numerous human rights defenders face criminal charges for “facilitating irregular migration” throughout Europe[8], on July 5, 2018, the European Parliament adopted a resolution to prevent humanitarian assistance from being criminalised calling on Member States to duly implement the humanitarian assistance exemption in their national legislation. The following day, French Constitutional Court recognised the prevalence of the ‘principle of fraternity’ over the ‘infraction of solidarity’ when aiding migrants without any financial counterpart.

[2] CDL-AD (2018)013-e Hungary - Joint Opinion on the Provisions of the so-called “Stop Soros” draft Legislative Package which directly affect NGOs (in particular Draft Article 353A of the Criminal Code on Facilitating Illegal Migration), adopted by the Venice Commission at its 115th Plenary Session (Venice, 22-23 June 2018)

[7] The LIBE Committee voted in favour of such procedure on 25 June 2018, and the report will next be examined during the plenary of the European Parliament in September.

[8] See for instance the Observatory’s Urgent Appeals ITA 001 / 0418 / OBS 048 published on April 16, 2018 on the criminalization of the NGO Proactiva Open Arms after a rescue operation in the Mediterranean, and FRA 001 / 0518 / OBS 077 published on May 29, 2018, on the criminalisation of three activists assisting migrants at the borders between France and Italy.