CIVICUS: World Alliancefor Citizen Participation, Front Line Defenders, FIDH, in the framework of theObservatory for the Protection of Human Rights Defenders, the WorldOrganisation Against Torture(OMCT), and the International Service for HumanRights strongly condemn the deliberate targeting of human rights defender Muhammed Ismail and hiswife Uzlifat Ismail, the parents of woman human rights defender Gulalai Ismail. Theauthorities must halt the ongoing judicial harassment against Gulalai Ismailand her family, which is a direct reprisal due to her human rights work.Gulalai has multiple criminal complaints filed against her, including underregressive anti-terror laws. Since she was forced to leave Pakistan due toconcerns for her safety, her parents have been targeted under the Penal Code,anti-terrorism laws and cyber security legislation. In the most recentincident, Pakistan authorities approached the Anti Terrorism Court in Peshawar,and filed a new case with charges that include sedition and terrorism. On 30September 2020, the court charged the three defenders. 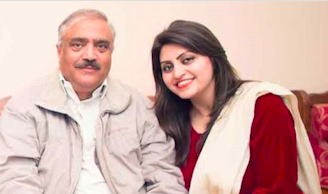 Muhammed Ismail is theSecretary-General of the Pakistan NGO Forum (PNF), an umbrella body of civilsociety organizations (CSOs) in Pakistan. He has been critical of human rightsviolations in the country, particularly the treatment of his daughter, humanrights defender Gulalai Ismail. The woman human rights defender and her familyhave been targeted byPakistani authorities in response to a speech she made in 2019, criticising the state/military response to the rape and murder of aminor girl. Since then, several First Information Reports have beensubsequently filed against them, forcing Gulalai Ismail to leave Pakistan forher safety.

On 2 July 2020, theAnti-Terrorism Court (ATC) in Peshawar had acquitted Gulalai Ismail and herparents, Muhammad Ismail and Uzlifat Ismail, of charges related to financialterrorism. Two months since, the authorities moved the court and filed the samecase with additional charges of terrorism, sedition and conspiracy against theState.

On 30 September 2020,the Anti-terrorism court in Peshawar heard the case and charged MuhammadIsmail, Uzlifat Ismail and Gulalai Ismail under Sections 11-N, 124-A, 120-B ofthe Pakistan Penal Code, which relate to sedition and criminal conspiracy, and7(g)(i) of the Anti-terrorism Act of 1997. These charges carry heavy prisonsentences. The defenders pleaded not guilty and are to appear for their nexthearing on 26 October 2020.

Further to the courtcase, the Federal Bureau of Revenue has sent over ten letters to MuhammadIsmail and his wife, Uzlifat Ismail, asking them to file taxes for the past sixyears. However, Muhammad Ismail has not been running any business and does not havea regular monthly income and his wife is a home maker. The last date to filethe tax was mentioned as 31 August 2020, however, the letters were onlyreceived on 1 September 2020. The family believe that this delay wasintentional to further target them with additional legal proceedings.

Less than a year ago,on 24 October 2019, Muhammed Ismail was forcibly abducted from outside thePeshawar High Court by unidentified men. He was later found in the custody ofFederal Investigation Agency’s Cyber Crimes Unit. He was charged under thePakistan Electronic Crimes Act for “hate speech” and “spreading falseinformation against government institutions”. The defender was grantedconditional bail after spending a month in detention. However, on 20 April2020, the defender was summoned for a court hearing after the FederalInvestigation agency filed an appeal at the Peshawar High Court to revoke theconditional bail that was granted to the defender on 25 November 2019.

The actions of thePakistani authorities in its targeting of the family are an attempt to silenceGulalai Ismail and punish her for advocating on human rights in Pakistan. FrontLine Defenders, CIVICUS, FIDH, the World Organisation Against Torture(OMCT) andthe International Service for Human Rights urge the authorities in Pakistan toimmediately drop all charges against Muhammad Ismail and Uzlifat Ismail, as webelieve that the human rights defenders are being targeted solely as a resultof their legitimate and peaceful work in the defence of human rights. We urgethe authorities to remove all restrictions on the free movement of MuhammadIsmail and Uzlifat Ismail, and cease all further forms of harassment againstthe defenders, as it is believed that these measures constitute a directviolation of their rights.

FIDH -International Federation for Human Rights, in the framework of the Observatoryfor the Protection of Human Rights Defenders

WorldOrganisation Against Torture (OMCT), in the framework of the Observatory forthe Protection of Human Rights Defenders

FIDH- InternationalFederation for Human Rights, in the framework of the Observatory for theProtection of Human Rights Defenders: Samuel Hanryon, Director of Press Relations-shanryon@fidh.org

World OrganisationAgainst Torture (OMCT), in the framework of the Observatory for the Protectionof Human Rights Defenders: IolandaJaquemet, Director of Communications-ij@omct.org