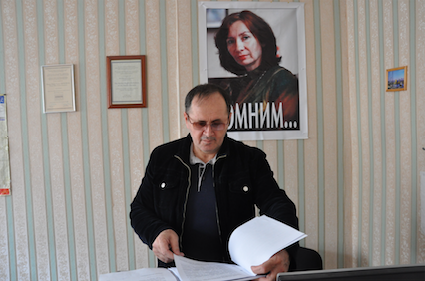 “Titiev’s arrest is a clear signal that authorities in Chechnya are trying to force Memorial out of Chechnya, which is an affront to everyone there who needs protection from human rights abuses,” said Hugh Williamson, Europe and Central Asia director at Human Rights Watch. “Titiev should not be in custody, where we fear his health and safety are at risk.”

Police arrested Titiev, 60, at approximately 10:30 a.m. on January 9, 2018, nearKurchaloi, a town 30 miles from Grozny, the Chechen capital. One of Titiev’sfriends told Memorial that he saw Titiev standing by his car on a local road nearthe Khumyk river bridge, surrounded by five or six police officers. The samewitness said that when he later went to the Kurchaloi police department to lookfor Titiev, he saw his friend’s car parked outside.

A lawyer sent by Memorial went to the police station in the early afternoon, butpolice officials did not acknowledge Titiev was in custody and did not let himin. In the early evening, Chechnya’s deputy interior minister informed Russia’sfederal ombudsperson, in response to her inquiry, that Kurchaloi police haddetained Titiev. The lawyer was then admitted to the station.

Russianlaw provides that authorities can hold a person for up to three hours beforeformally placing them in custody, but the detainee is entitled to access to alawyer as soon as they are detained. Titiev had access to his lawyer only afteralmost seven hours, and when the authorities issued the official report registeringhis detention, they listed the time of detention as 8.10 p.m., approximately 10hours after he was first in their custody.

“The detaining authorities refused to provide any information about hiswhereabouts and fate for close to seven hours, in violation of internationaldue process standards, raising a real concern that they may have been trying toforcibly disappear him,” said Andrew Anderson, director at Front LineDefenders.

“Russia has an obligation under international human rights law to immediatelyregister and acknowledge all detentions, and allow detainees access to their lawyers,a fundamental safeguard against ill treatment and enforced disappearances,”said Denis Krivosheev, head of the Eastern Europe and Central Asia RegionalOffice at Amnesty International.

Thepolice told the lawyer they had allegedly found 180 grams of a marijuana-like substance in a bag inTitiev’s car and that Titiev was under investigation for possession of an illegaldrug. Titiev denied the allegations and insisted the bag had been planted bypolice. If convicted, Titiev faces a maximum 10-year prison sentence. The humanrights advisor to Russia’s president, Mikhail Fedotov told the press, thatTitiev’s case may constitute a fabrication and the investigation authoritiesshould look into the issue.

The rights groups called on Moscow to ensure that Titiev is immediatelyreleased, that there are no further threats to his security, and that humanrights groups can carry out their work in Chechnya safely. Nils Muižnieks, theCouncil of Europe Commissioner for Human Rights, issued a statement expressingconcern about Titiev’s arrest, questioning the “dubious charges that lackcredibility” and calling on Russian authorities to immediately ensure hisrelease.

Russia’s international partners should follow Muižnieks’ example and publiclyexpress their objection to this attempt to silence Memorial and urge theKremlin to secure Titiev’s immediate release and continued safety.

“Bogus drug-related charges and planted evidence are a regular tactic thatChechen authorities have used to punish and discredit their critics,” said FIDHand the World Organisation Against Torture (OMCT) in the framework of theObservatory for the Protection of Human Rights Defenders.

In the summer of 2014, a court in Chechnya sentenced local activist RuslanKutaev to four years in prison on fabricated, politically motivated drugcharges after he criticized and disobeyed an order by Chechnya’s leader, PresidentRamzan Kadyrov. Kutaev was paroled in December 2017. In 2016, another Chechencourt sentenced journalist Zhalaudi Geriev to three years in prison onsimilarly fabricated drug charges. Geriev reported for Caucasian Knot, an online outlet that reports extensively on Chechnyaand that has criticized Chechnya’s leadership.

Memorial has monitored abuses in Chechnya for more than 25 years, reportingextensively first on abuses by federal forces during the two Chechen wars, andthen on violations carried out by local authorities with the Kremlin’s tacitblessing.During the past 10 years of Kadyrov’s rule in Chechnya, Memorial haspublished hard-hitting exposés on collective punishment practices, enforceddisappearances, torture and other ill-treatment, punitive house burnings, andextrajudicial killing by local security officials. They have consistentlydescribed contemporary Chechnya as a totalitarian enclave within Russia, notingKadyrov’s interference in virtually all aspects of social life, includingpolitics, religion, academic discourse, and family matters.

Titiev has led Memorial’s work in Chechnya since 2009, after the kidnapping andmurder of his colleague Natalia Estemirova. His arrest followsyears of threats and smear campaigns by Chechnya’s authorities against Memorialand other human rights groups. Kadyrov and other Chechen public officials routinelyvilify human rights defenders as “puppets of the West” and “enemies of Russia”bent on destabilizing Chechnya. Some activists also suffered attacks andharassment by local security officials or pro-government thugs.

The most recent smear came in December 2017 from Magomed Daudov, speaker ofChechnya’s parliament and Kadyrov’s right hand man, after Kadyrov was includedas a target for US sanctions under the US Magnitsky Act and his Instagramaccount was blocked. Daudov accused human rights defenders of “runningto their boss across the ocean and pouring rivers of lies” and said: “Iwouldn’t be surprised if they were involved in other subversion aimed atweakening our state….I think it’s time to send our enemies, those who don’tlike a strong Russia, [out of the country] to their foreign bosses or to isolatethem from polite society. …If only Russia hadn’t had a moratorium [on the deathpenalty], we could’ve just bid these enemies of the people ‘salaam alekum’ andbe done with them.”

“The fact that Chechen authorities have so blatantly invented drug accusations againstTitiev is not surprising, in light of the vicious way they persistently target peoplebrave enough to try to speak up about human rights abuses,” said Bjørn Engesland,Secretary General of the Norwegian Helsinki Committee. “The question is, whatwill Russia’s federal authorities do about it and whether Russia’sinternational partners will do their utmost to ensure Moscow does the rightthing?”